THAT is how many new NASCAR cards I got from my friend on July 16th...making it the #1 day all time in my NASCAR collection! The previous record was 990 new cards, which took place on January 10th, 2010, when my local diecast shop was closing and he gave me every card he had left in the store.

The day now ranks 4th all-time in documented new cards in one day for me. (I only began keeping records in 1999, but only one day would rank higher- my birthday in 1997 when my brother gave me 20 200 count boxes of NBA!) I also bought a nearly full 5000 count box of NASCAR cards in 1998 but  I don't think it would go that high- there were a lot of duplicates, up to 10 copies of the same card was not unheard of, and of course all the Earnhardt and Gordon cards had been removed. I probably should have looked in the box first, but when I saw a box that size for $25, I grabbed it!)

Most of the cards I just got are from the 1996-2000 period, which is something I was really sorely lacking. 1998-2000 are some of the least represented years in my collection, despite the fact that 1998 is actually my favorite NASCAR season. The biggest gain was, I believe, 1999 Stealth. I had 2 cards, and now I'm under 10 away from completing it! I also completed at least one insert set.

I completed 1 set- 2011 Element. Pretty much every regular Cup driver from that time frame and nearly every set saw new cards...it will be a while still before I know who made the biggest jumps, but I am taking a screencap of the stats for drivers and years, you will see much difference in the post-entry screencaps!

This is just some of the cool cards...there will be more to come. This is just a cell phone picture and I know it's terrible, sorry about that. Still learning the phone, and how to trigger the camera flash... 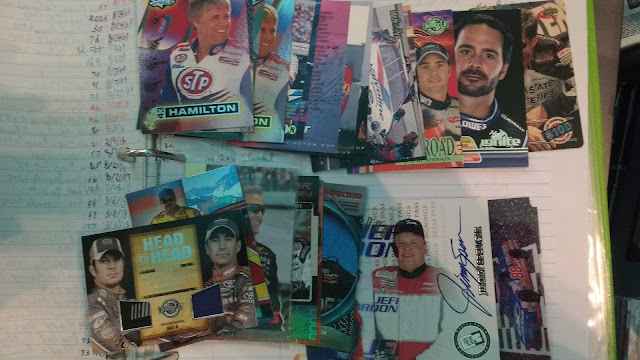 Posted by Billy Kingsley at 3:37 PM

Email ThisBlogThis!Share to TwitterShare to FacebookShare to Pinterest
Labels: NASCAR