NASCAR gift: looking at the numbers

So, I've been working with the NASCAR cards I was given as a gift almost non-stop over the past several days (with a break out for the Eldora truck race- NASCAR needs more dirt racing!) and I have now finished entering them into the three places I track my collection. #1. My paper listing, this is the most important. I've been keeping the paper listing since I was 14 years old and is the backbone of my collection. #2, the Excel chart where I track the order I get the cards. I don't really have any purpose for this except that I'm OCD. I keep track of the order I get them, the date I get them and what number they rank in my collection...which is troublesome as it rarely matches my paper listing. I somehow got them all typed in in one day, which is a bit Herculean in and of itself, as there were 1172 cards to type. No, that is not a typo, 1127 were NASCAR but the box included a smattering of non-NASCAR...plus the NBA cards my brother bought me the day after the NASCAR gift. (Which will get their own post soon because there is something really cool about them- stay tuned).

#3 is the Trading Card Database. It's the only place my collection is listed publicly, and is my internet home. When I joined in 2012 I listed my entire collection, at least what I could at the time, and I've been working on filling in the peripheral stuff ever since, and naturally updating new acquisitions as well.
For a while now, instead of entering everything as I get it, I scan them first and then add them to my collection on there as I post the scans. But there were too many to do that with here....I won't finish scanning these anytime soon. I originally speculated a month or more, but after entering them...and seeing how many are mirror foil...I know it won't be this year. So I entered them all in, sorting them out as I went. Cards that are not yet posted went in one stack, mirror foils went into one stack, die cuts and clear plastic went into another stack, die cut mirror foils got their own stack, and the cards that were already scanned and posted by other people got a stack- which turned out to be the largest stack. Those went into a box and will be scanned at some future later date. Even breaking them out, I'm looking at roughly 600 cards than need to be scanned, with about 3/4ths of them needing to be done on my "new" scanner, which is slow and a pain to work with, adding to the time.

I thought to take screencaps of my collection stats page on the Database before and after entering the cards. I didn't do any actual thinking on my own, but the biggest jump appears to be Mark Martin, who saw about 40 new cards added and moved into 2nd place in my collection, passing Dale Earnhardt Jr.
Here are the before stats for drivers, and remember, you can click on it to make it bigger. Sorry it's so small, but I wanted to capture the top 100. 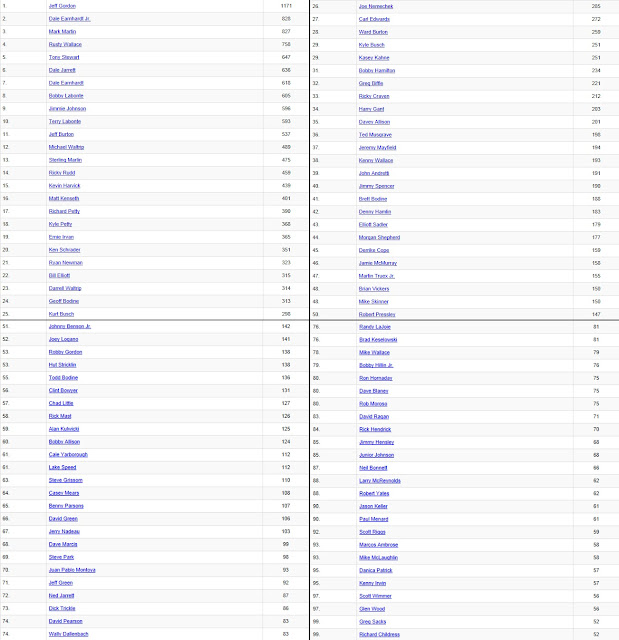 Now, here is the after. 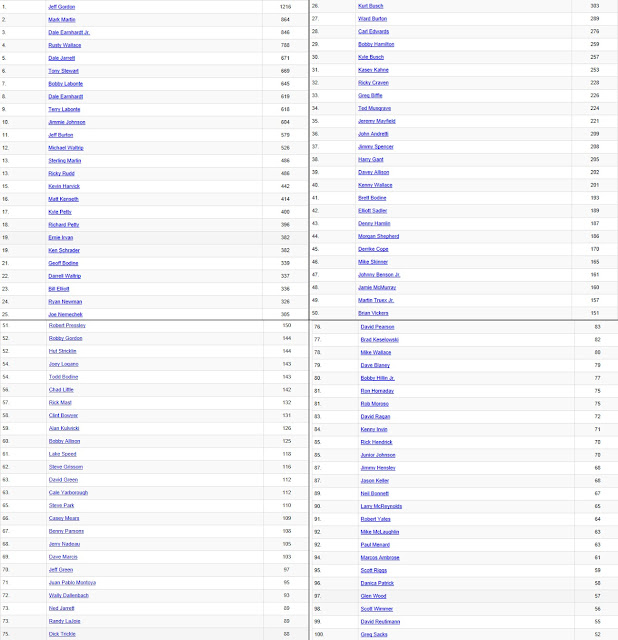 Since it's so hard to read, here is just the Top 25 before and after.
Jeff Burton went from 537 to 579 and still couldn't crack the Top 10...wow. Sometimes my collection even amazes me, not to sound like I'm bragging or snooty or anything...I feel very fortunate and lucky to have been in the right place at the right time multiple times to help me build this collection. I don't know what I've done to receive the kind of generosity  I've been shown over the years, and I hope to be able to repay people at some time. Being able to have a collection like this is a privilege especially considering the health stuff I deal with on a daily basis.

I need to work on getting more Ernie Irvan cards. Ernie was my favorite driver when I discovered the sport, and remained so until he retired in 1999, now he is my favorite retired driver. I need to get him higher than 19th in my collection...getting him past Kenseth is a new goal for the remainder of 2016. Luckily, there are a lot of cheapo base cards I still need of him, so I should be able to move him past Kenseth with a $20 COMC spree. Of course since it'll be a while before I do something like that again I will probably be distracted by cheap SN parallels when I finally do put anything into there. I'm a sucker for SN cards, but I digress.

Here are the seasons- 1998 was the largest increase. Fitting as 1998 is actually my favorite season in NASCAR history. Every set that could have new cards got some except SP and Pinnacle Mint, although come to think of it I thought I remembered getting a Mint card when I was first going through them, now where did it go...?  Must have turned out to be a duplicate. Note that these numbers are for all forms of racing, not just NASCAR. While NASCAR is my thing, I also have a collection of Indy, Sprint, Drag, F1, monster trucks, pretty much anything I can get my hands on. If it has wheels and competes in contests of speed, I'm all for it.
I'm still reeling from all these cards. I'm not sure that's the right word...but they came at a much needed time when nothing was going right, and I was in a pretty bad state of mind. But it turned into my best day in the NASCAR side of the hobby ever (and top 5 all time)...even though 2016 is my 24th year collecting NASCAR!
Posted by Billy Kingsley at 5:16 PM