Writing out #30-2 was actually a lot of fun. Ranking them was harder, and given enough time, it will probably change. Some were admittedly toss-ups as it was, in regards to ranking. The Top 20 countdown I made for the NBA would be significantly different now, as a set I ranked 12th would be pushing the top 5 if I made the list today. I will be curious to see how it may/will change over the years when I look back on these posts. The great thing about non-sports cards is...there may be a set out there that would crack the top 30, but I may not even know it exists yet. The discovery aspect is something totally missing from the NBA or NASCAR, and will someday surely be the same for the NHL. Non-sports is different.

I said when I was going in that #1 was the only one I knew for sure when I started, and that has held true. It's a set I've written about multiple times before:


An 156 card set, I have 124, or 79.5% of them. What a set this is! It covers most of known history's most important events up to that time. Well, at least those that involve the USA. Unlike almost every other set, it doesn't limit itself to American history, it just favors it heavily. It is truly the most historically minded history set ever made, and for somebody like me, who dreams of being an archaeologist/museum curator/recognized history expert, this is the be all end all. It covers just about everything, and everywhere. I can go on and on about this set, but I'm going to link to the checklist, which has all scans front and back, on the Trading Card Database. Just take a look at the wide variety of subjects included! It covers some sports events, as well.

The only bad thing I have to say about this set is that, at 156 cards, it's too small. There's so much more that it could have done. Ancient history in particular could use more coverage. The backs were interesting, in that they were all done up as newspapers. Obviously, some of the newspaper concepts had to be made up, as they didn't have newspapers as we know them in ancient Rome, for example. But it works for me. The book I read- 1990's Chronicle of the World- that got me into history and really introduced me to the ancient world- was done up as newspaper articles which makes this set even better for me,

Here's a sample back, something that I didn't post for the other 29 sets on the list. Some of the backs have photos, some drawings. All card fronts have drawings. 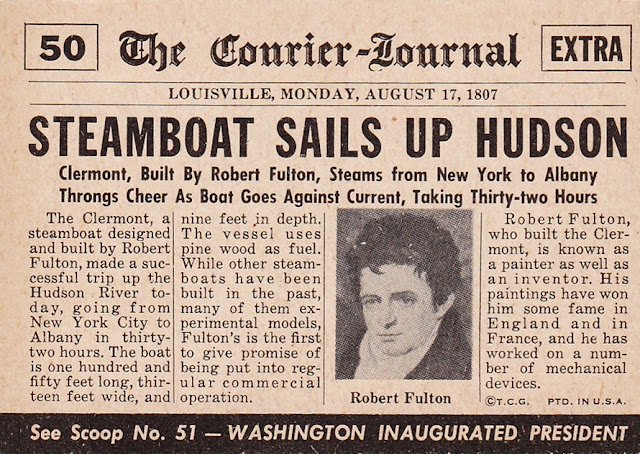 One thing I should mention, these cards are smaller than standard size. 2 and 3/4ths inches by 2 inches. It's not really a detriment.

This set is a fairly recent discovery by me. I only discovered it existed in 2014, when I found a dealer with a binder full of them...he got them all new as a kid. Now I have the entire contents of that binder in my collection. It took me until 2017 to get them all, but finally, I did. It's funny...so much of this countdown was nostalgia based. Some of it was entirely nostalgia. But this set? All new. Not only that, it took until I was an adult to truly appreciate it. I would have gotten the car cards at any time, but pre-2007, this series would not have done all that much for me, let alone have been my all-time favorite non-sports set. Finding these, at this point in my life, is what allowed me to truly appreciate them. And I do!

This is also the first and as yet only non-sports set I've written up a wantlist for here on the blog. I plan to do them all eventually, but I have not worked on the wantlist much lately. This set, though, has one.

A couple of stats, because I have some free time to work on them since I finished getting my collection onto the Database, and I built in 4 days of lead time for this post:
To recap, here is the Excel chart I made to sort for this stats section, and the final countdown. 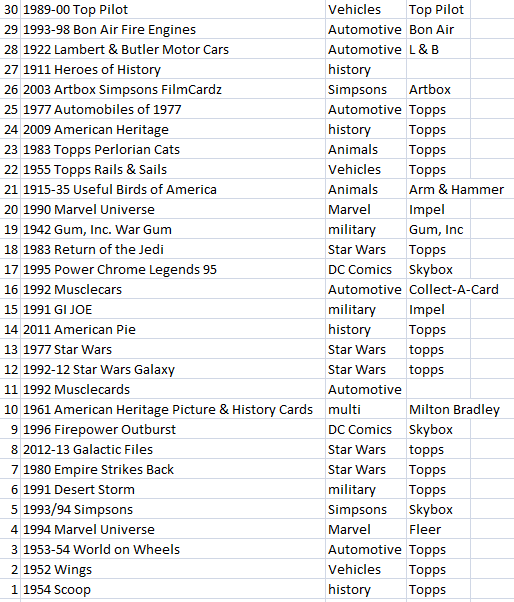 This countdown was a lot of fun. Not as hard as I thought it would be. Some of the exact placement choices were difficult, but I enjoyed it much more than I expected. Thank you for reading, if you read all four posts. I will do something I rarely do, and end with a question: What's your favorite non-sports set? Perhaps it's one I've never heard of!
Posted by Billy Kingsley at 5:00 PM