When I first got into hockey, I found it so strange that the teams would draft players, but they wouldn't come play with the team right away. I was so used to the NBA, where if a player didn't make the team as soon as they were drafted, they would likely never play for that team, with most generally ending up playing professionally in Europe or the G-League.

Hockey's different. It's not uncommon for a player to not join a team for years after he was drafted.

The first player where I really experienced that for the Rangers was K'Andre Miller. Drafted back in 2018, he finally joined the Rangers in time for the 2020-21 season. With the state of the hobby I got very few cards this year, and didn't have any of his...until I ordered the Star Rookies box set, a 25 card factory set, of which half were people I didn't yet have in my collection...but the most important to me was K'Andre Miller. 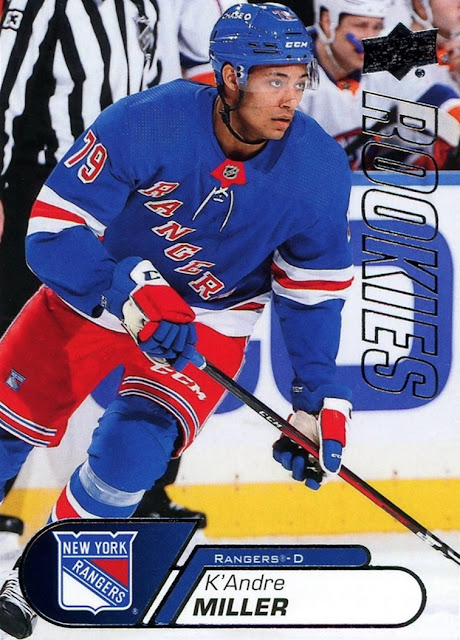 I'd like to believe this will be the first of many cards I add of him to my collection, but with the state of the hobby I just don't know what the future holds.

I even scanned a whole page of this set just specifically to get this scan for this post, despite the pain it causes me at this time.

The Rangers now have a good coach for the first time in a few years, and we got rid of the GM who has been trading our players for magic beans, so I'm hopeful for a good season next year.