I got a surprise in the mail the other day when an unexpected package showed up from Gregory of Nine Pockets fame, and it was a great one- all 9 cards I was needing to finish off the 1990-91 Upper Deck NHL set! This makes it my third completed NHL set, first one completed the natural way- piecemeal and over time! A huge thanks to Gregory for the assist, and also to Shane of Shoebox Legends, who sent me about 100 cards I needed a while back. Are you still out there Shane? I got a box of Series 2 for Christmas either last year or the year before.

Thoughts: The set is available with multiple holograms on the back...as much as I want to care about that, I don't, and my set is a mix of all three. If I come across variations in my duplicates I keep them but I don't seek them out. The first Upper Deck set is the first I completed in this sport, and in my 30th anniversary of buying Upper Deck cards...even though I didn't start watching the NHL until late 2016, I actually got to see one of the players in this set in action, live, in Jaromir Jagr.

Favorite memory of the set: For my birthday in 2017, my Mom gave me a copy of the Jagr card, it was the first specific hockey card she bought for me. 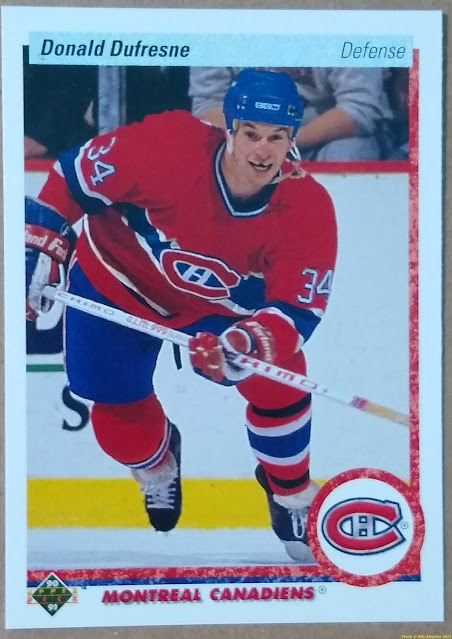 Sorry for the crappy picture, my scanner is not plugged in during the course of my typing project.