A closer look at the cards I got for Christmas 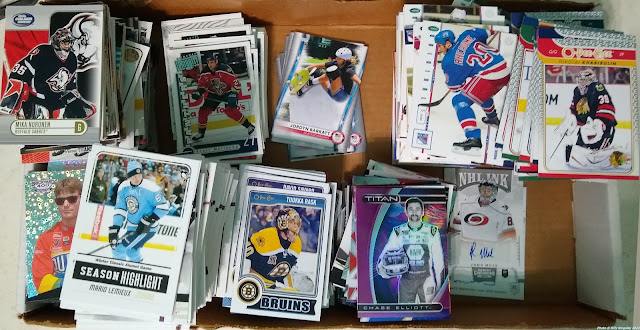 Here they are all sorted by what group they came from. Top left is all of the repacks I got combined. 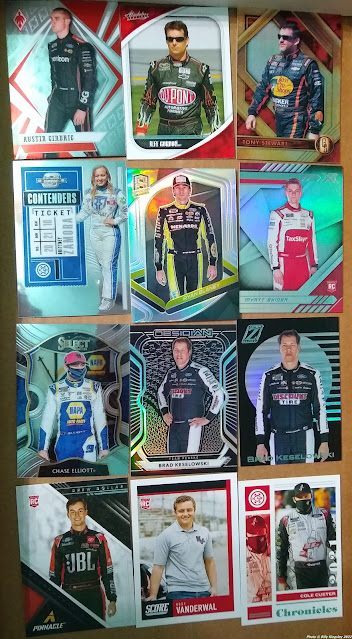 Chronicles was the hobby box I got and that surprised me, it's been a while since I did a hobby box. As you can see there are a LOT of different designs in Chronicles. Unfortunately, unlike the NBA set, each design is numbered separately, I only got two base cards in the box...in fact, the "base" set is only 20 cards, while the Spectra set is 75 cards. Or maybe it was the Obsidian set. One is 75, one is 65, and there's so many I forgot which one is which, even though I wrote it all down on paper just a few days ago. Not even all of the designs showed up in my box...there are two that didn't. 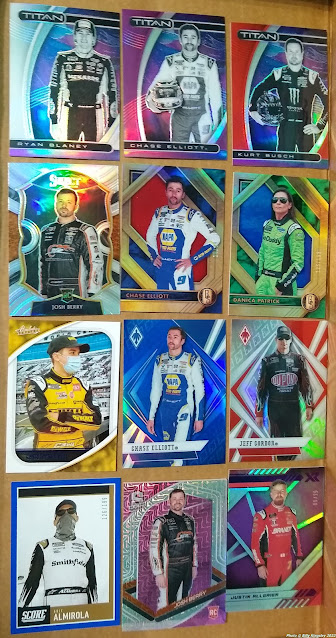 Panini being Panini, there are LOTS of colorful parallels, some of which are numbered. The Pink Josh Berry is SN to only 25 copies, the lowest number I got in my box. They have versions down to 1/1s.

The inserts also have autographed versions available, of which I pulled three in my box. Oddly most are corresponding to the number of the driver's card in the insert set, but the Jeb Burton is lettered. All of the Obsidian cards are Prizm technology by the way. I had previously purchased the Ryan Blaney 1/1 autograph parallel from the Black set at a card show back in November.

Now, the repacks. Unfortunately I either forgot to take a photo of them all spread out as you will see with the other sets, or my camera did that thing where instead of taking the picture it tried to zoom in and out instead. Either way, the good picture is not here. The cards from the Presstine repacks were all great...oh how I wish I had access to them on a regular basis. The cards from the Tri-Star box of repacks were generally in poor condition. Most of them ended up in my "get better copies before scanning them" box bad. 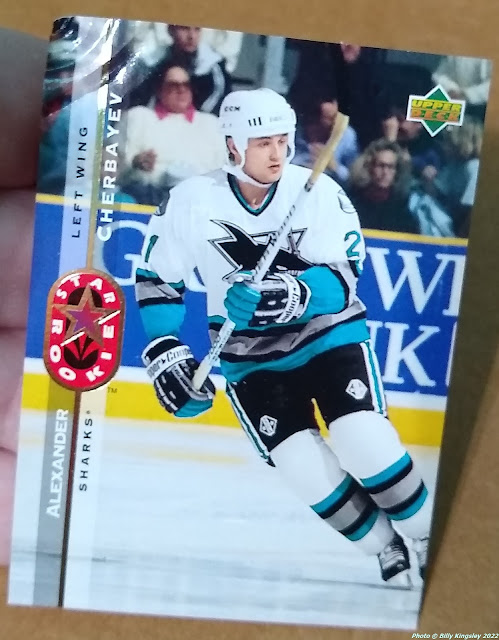 The two relic cards came from Presstine while the Tiger Williams autograph came from the Tristar box. 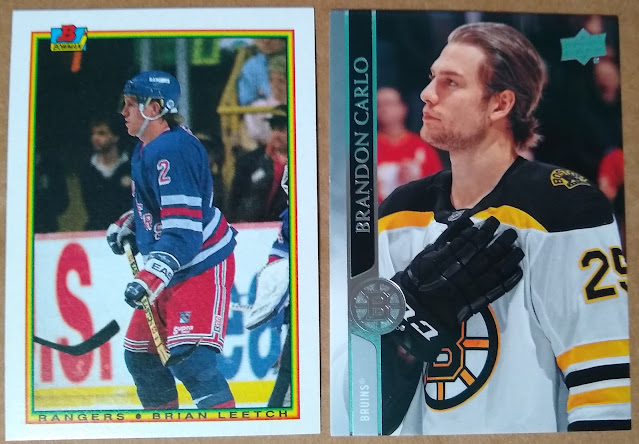 The oldest and newest cards in the repacks, both from Presstine. 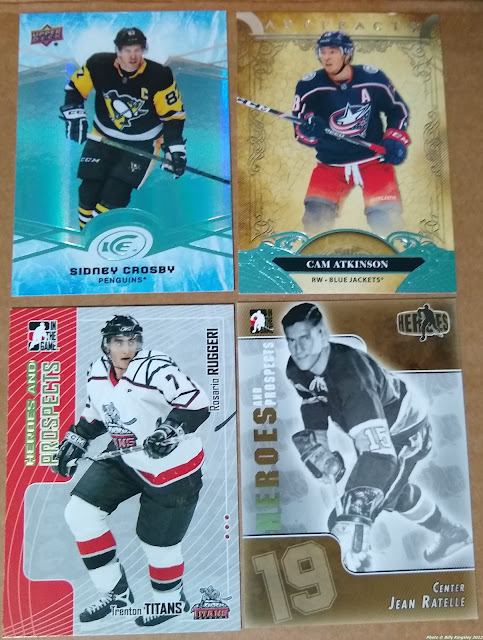 The Presstine packs gave me new sets that were not previously in my collection! Although I am focused more on my One of Every Player collections, getting a new set is still a thrill. 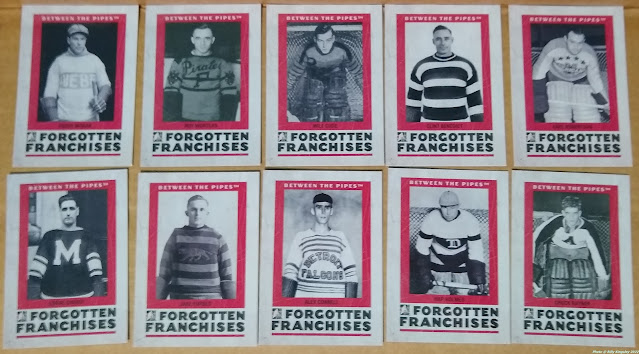 The Forgotton franchises insert is  was one of my most wanted inserts...you all know I'm a history nut, I even put it in the title of this website...and forgotten franchises are awesome! I saw this insert was available on Steel City's website and put it on my list. I was glad to get it. Some of these teams only got cards in two sets...ever. This, and the 2004-05 In the Game Franchises set.
Moving on to NASCAR, the Brickyard 400 box was the only one where I was any kind of disappointed...and that's because it's only a 100 card set, and I got a stack of duplicates probably more than 50 cards high, but still came up 11 cards short of a complete set. Some of the cards I got 4 or 5 copies of. That was frustrating. 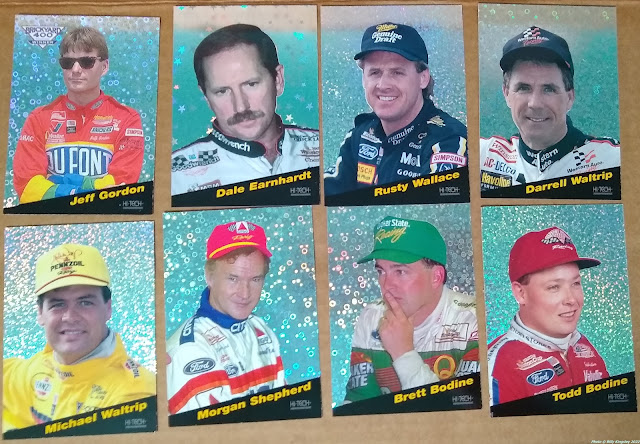 The Top 10 insert comes with 4 different backgrounds- circles, stars, and sparkles were inserted randomly into packs and the tin factory set. A fourth, a foil image of their car, was only in a dual factory set issued with the Indy 500 set they also did. These are the new ones I managed to get from the box. I ended up with two copies of the Michael Waltrip card in this box alone, not even different backgrounds. 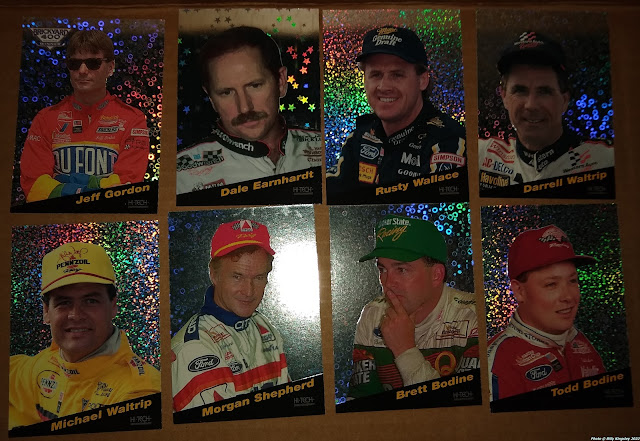 Seeing them with the flash on really brings out the holographic foil aspect of them much more. 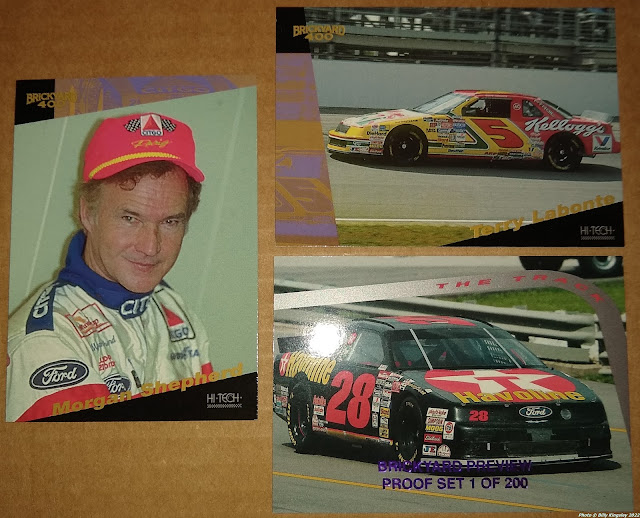 Here are the base cards, of which the drivers they chose got a person and a car card, and the only other insert, which totally baffles me because that is from an entirely different set, but with a purple stamp on it. Hi-Tech did two Brickyard 400 sets, both in 1994 (one before and one after the race, most places list this set as 1995 but that's wrong) and the 28 car is from the before set, issued with the after set. Confusing. 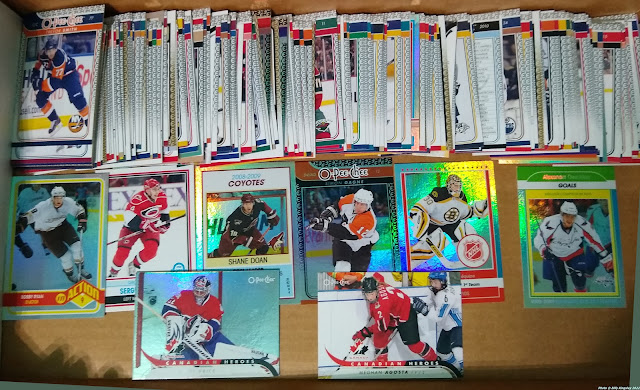 The 2009-10 O-Pee-Chee set is awesome, I really like the design. There are a lot of cards in the set. which I also really like, because I feel that everyone in the league should get a card. There's also a Retro and a Rainbow parallel, and a handful of inserts, including two Canadian Heroes versions, only the Ladie's version actually shows them playing for Team Canada. 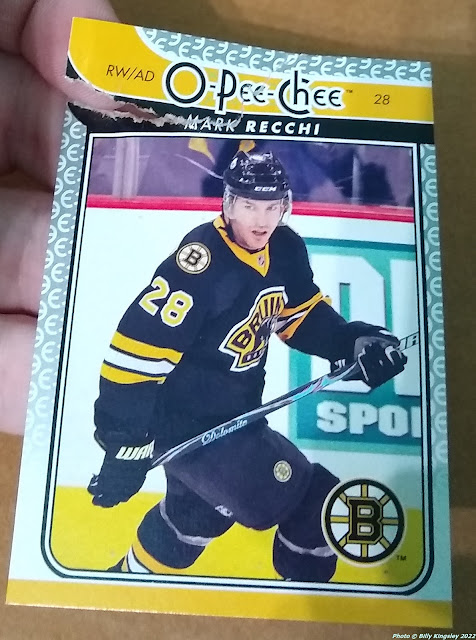 Unfortunately the repacks weren't the only source of damaged cards. The 2003-04 Parkhurst Original 6 New York Rangers set was awesome! As a big time Rangers fanatic who's still learning the team's history, this was a nice snapshot, although I wish it was a bit more inclusive...it's only a 100 card set. The good news is that I got them all! All 100 cards joined my collection on Christmas day, previously I had only one insert from the set. The base set is made up of 6 subsets. You have the active roster of that season, retired players, All Stars from the team's history, a section on players who were elected to the Hockey Hall of Fame, the Captains in franchise history (but only a handful of them) and Franchise Leaders should be obvious. There are three inserts, of which I got only two. The main insert is actually very similar to the base set in look and feel, and has multiple designs. It's 14 cards long and I now have four of them, would like to complete it some day. The Jersey cards are pretty obvious in what they are. The one I didn't get was Autographs. 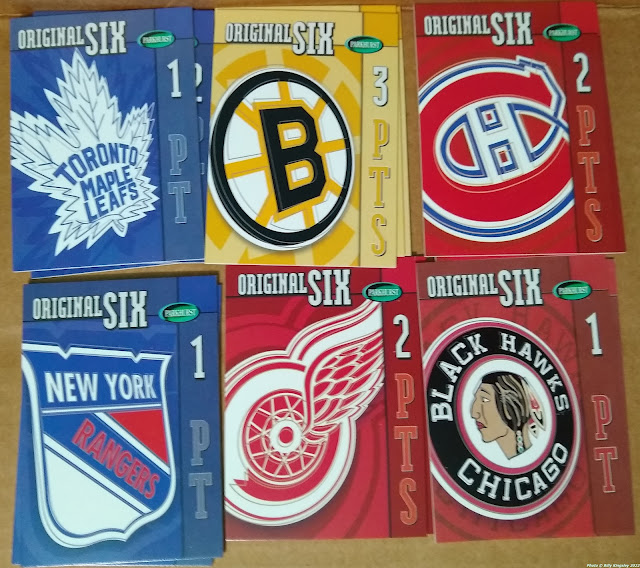 There are also these He Shoots He Scores inserts which served as pack feeler protection, each team is available in three different versions, one point, two points and three points. As a big fan of team logo cards I was glad to get them, although I do wonder why Chief Blackhawk is wearing lipstick.

2011-12 Score was the largest stack, and I had very few cards from this set beforehand, so that made it an awesome box to get. Oddly I pulled two copies of the St. Louis insert from the box, the only time that happened in any of the hockey I opened.

There are three parallels. Glossy, Gold Rush and Black Ice. I did not get any of the Black Ice cards. None are SN but the Gold was one in the box while the glossy were one per pack. 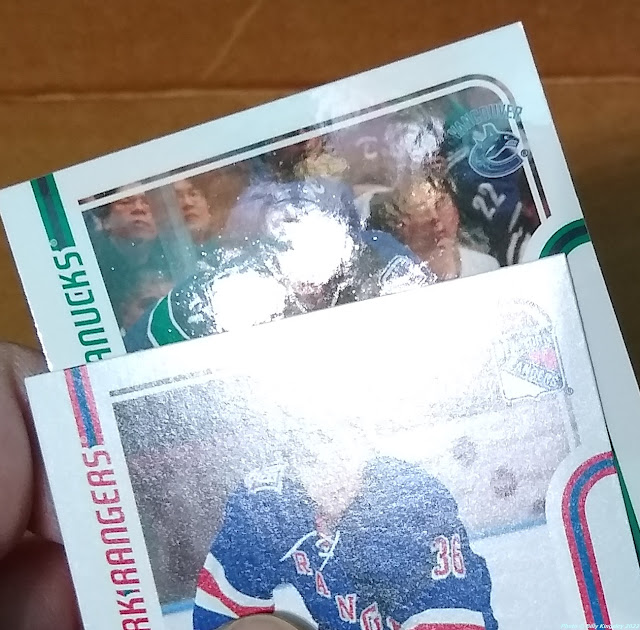 Here's a better shot showing the difference between base and glossy. Panini, which owns the score brand, thought this was a good idea for several years.

There are three subsets to the base set- Season Highlight, Stanley Cup Playoffs Highlight and Hot Rookies. The Hot Rookies are not available in glossy for some reason. 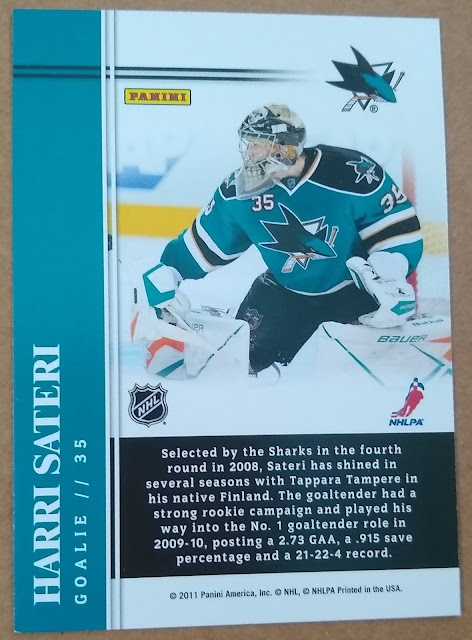 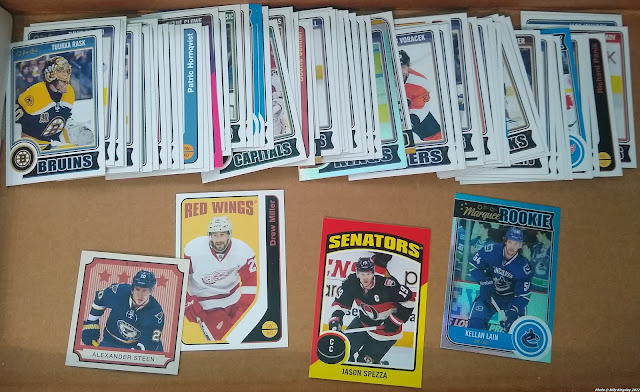 The blaster of 2014-15 O-Pee-Chee didn't give me as many cards but I really like this set as well. Great design, the Retro cards are cool too. The Stickers are awesome. The small card is an homage to the 1930s O-Pee-Chee cards, someday I'd like to get at least one of them for my collection. I can't really think of a lot to say about this set, but I really do like it...the O-Pee-Chee cards are some of my favorites from each season and I'm thrilled to have them. 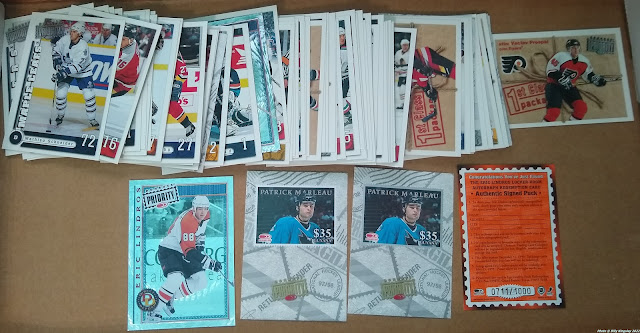 The Donruss Priority box is the oldest hockey that I opened on Christmas and was the most unique in that there are two different sizes of cards in the box. These are the standard sized cards, which are packaged interestingly...the even numbered cards are in one version while the odd number came in the other. I had never had a copy of the base card in my hands before, I wasn't familiar with the design. I'm sure I've seen it before as I did have one of the 1st Class Package subset cards and surely saw the base card when I logged it onto my collection on the Database, but it didn't register. And the bright orange card on the right? 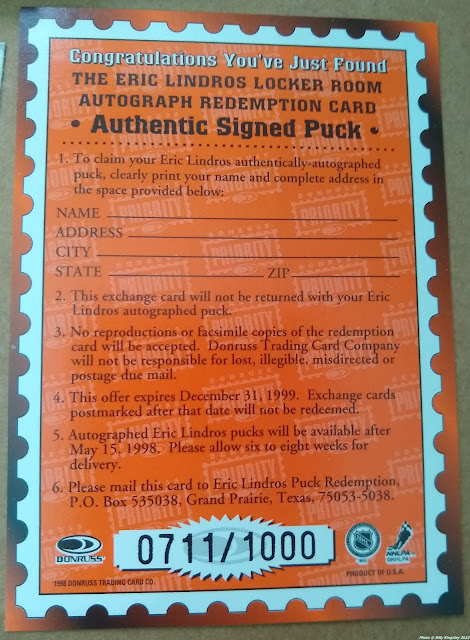 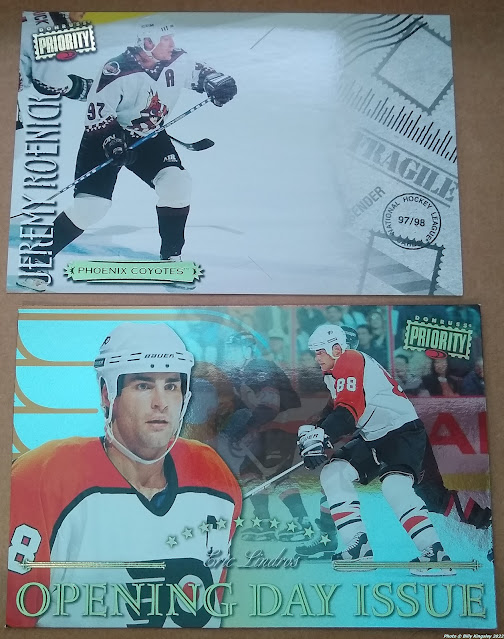 The post card sized cards are pretty cool, but as with all oversized cards a challenge to store. The top card, an insert called "Post Cards" have four little slats in them that you are supposed to put the actual postage stamp inserts into...of course, the postage stamp inserts, as seen by the base and Silver Patrick Marleau above, are printed on a very flimsy backer and probably wouldn't survive being stuck into the holes. They may even be stickers, but I'm not going to find out. 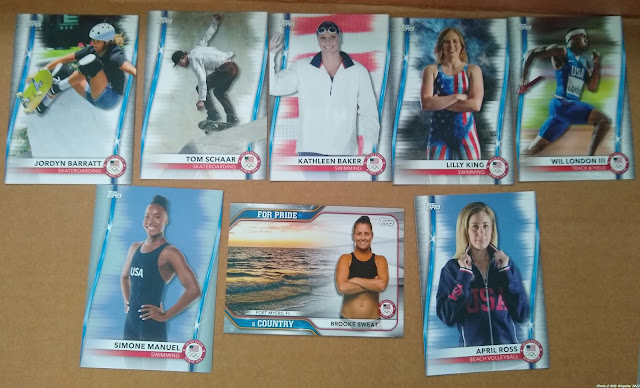 As I've talked about in the past, I love the Olympic cards. Unfortunately, the box for the 2021 set was over $200, so I couldn't afford one. I got one pack and this is what I got. The April Ross card happened to be the 1000th Olympic card in my collection. which is quite a milestone. (if the numbers are correct, no guarantees). As much as I love the Olympics the sets they get aren't all that great to me. I would much rather have a card set issued AFTER the games which actually show the events and especially the winners...yes, even if they are not Americans. Until that happens (I'm not going to hold my breath) I will enjoy what is available.
I hope you enjoyed seeing a peek at what I got...I'm sorry I messed up on the repack cards, missing the picture of them proper. Especially as I love getting repacks...that was my favorite way to build my collection when I built the majority of my NBA collection...but It's taken me 2 weeks to put this post together as is and I don't want to push it back any further. Thanks for reading.