Back a few years ago, I sorted out my cards that needed scans for the Trading Card Database, in an effort to prioritize them and get them posted. When I did the NASCAR cards, I set aside the Jeff Gordon cards that were already posted...and there were a lot of them since Jeff is one of the most popular drivers ever.

I remember putting the cards already posted in a small white box, and I hadn't seen them since...or so I thought. I don't remember when I began to work on scanning the NASCAR cards that were already posted to the Database, but I think it was 2018. (I know I finished getting everything on the Database on Christmas Eve 2017, and I had finished NASCAR quite a while before that since I made it a priority.) I remembered putting them in that small box, and I've been looking for it for a while now.

I've probably checked each small box twice, wondering where it could have gone off to...

Then, out of the blue this morning, I had an idea, to check the 5000 count box I have right next to me but rarely go in because I use it as the base for my built model display. After a significant amount of work to get into the boxes, I got to the bottom box...and there they were. 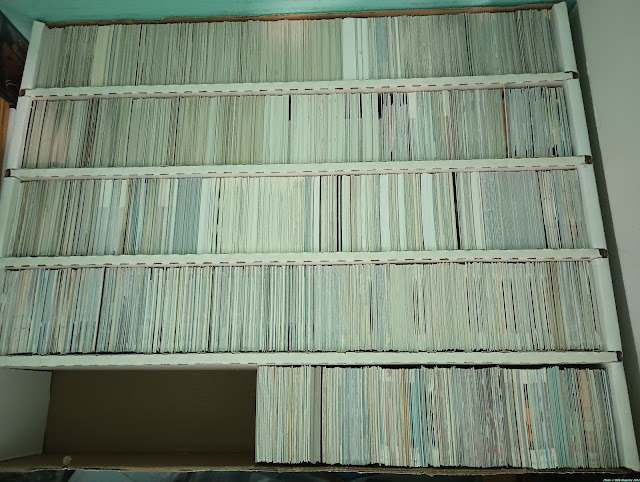 I have no idea exactly how many cards it was, but the column at the bottom was full when I opened the box, and after I took the Jeff Gordon cards out, that's how it looks now.

I have no idea how long it will take me to get them all scanned...may take quite a while, but there's no time limit. I do know that I have more cards of Jeff than any other person, over 1200 according to the Database, although they include stuff that shouldn't be included like multi-person cards, race scenes and more. I've got 766 scanned currently.  Every other card in that box needs scans too. I'm not yet close to being caught up,