I'll be honest- I hate the so-called "super premium" sets...the ones that cost an arm, leg and kidney to buy...and I've mostly stayed away from them. Not by choice, but because medicine must come before cards. Each box of Press Pass Showcase sells for roughly $225, so, in all the years they've done it, I've never done a box before. Until November 17th, 2014. Dave & Adam's put the box on sale for $100. For 16 cards, that's still a lot of money...but I could justify spending that. And besides, I may never have another chance to do a box of Showcase, so why not?
Now, in a normal box break, I would not post every card. For instance, I did a box of 2014-15 Hoops a few weeks back and ended up getting several hundred new cards- to see them all, that's what the Trading Card Database is for. I would post highlights- the standard hits, and whatever I deem as highlights. But at 16 cards, for Showcase, I will attempt to post them all. 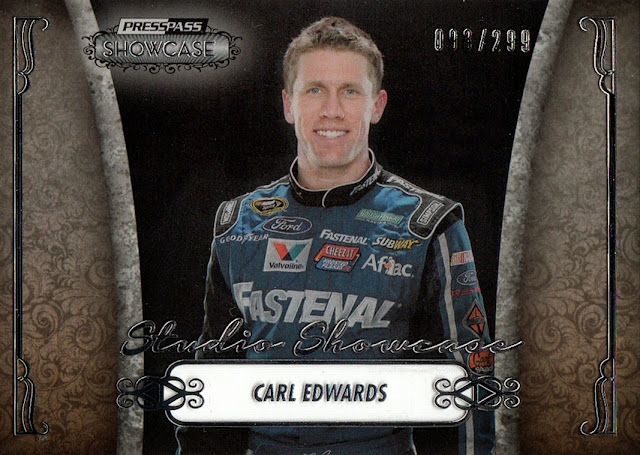 The first card out of the box is a Carl Edwards insert, which is actually printed on clear plastic. Serially numbered 093/299. 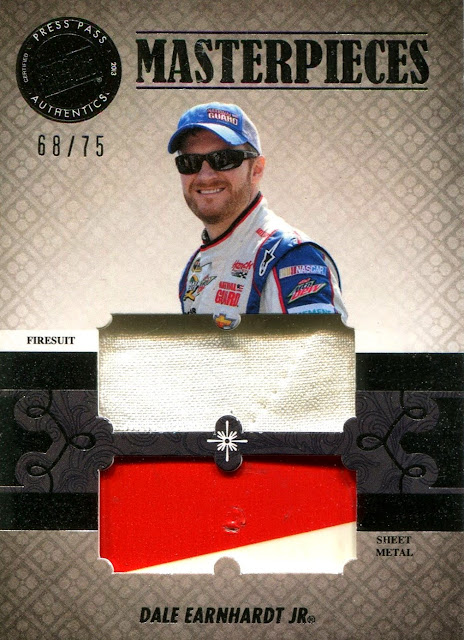 Second card out turns out to be my favorite of the entire box! Dale Earnhardt Jr. has been my driver since Ernie Irvan retired and Dale moved to Cup in the same year. I have never had a lot of luck pulling multi-piece relics but I pulled a good one here. This is the second piece of sheet metal I've pulled from Dale Jr, the last coming all the way back in 2002. 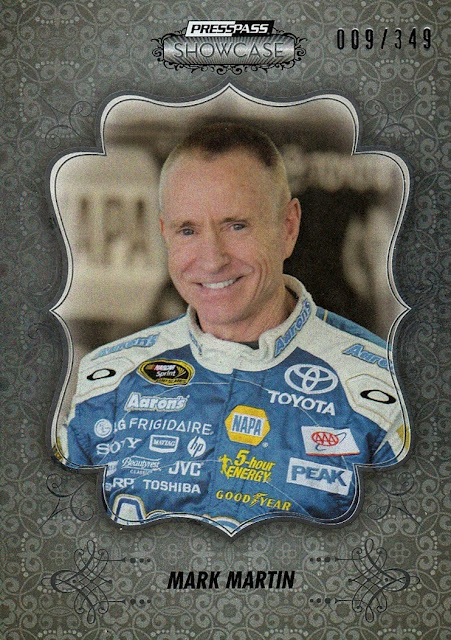 First base card, #19 Mark Martin. Good design. Mark has been around since they raced chariots...not really but it sure seemed like it at the end. Odd twist of fate- my only other previous Showcase base card, which I was given as a gift, is of Mark, from the 2010 set. 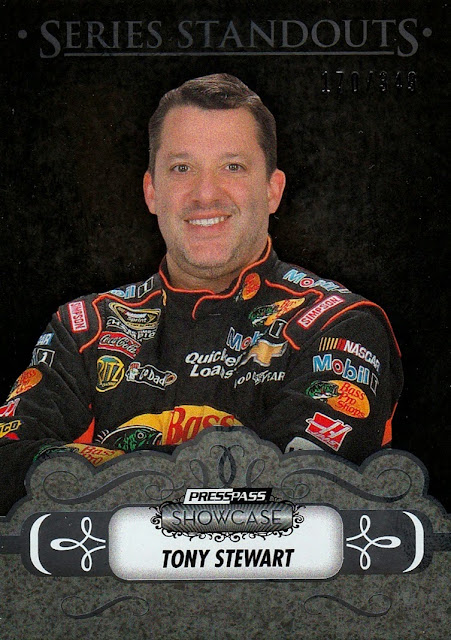 The next card is a subset of Tony Stewart. I like the base card design better...what a shocker! The serially numbering, which didn't scan all that well, is 170/349. 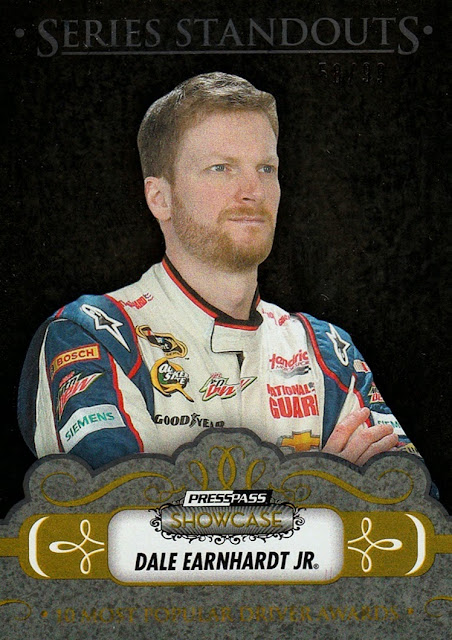 The final card in pack #1, is a gold parallel of Dale Earnhardt Jr. The subset looks better with the gold bracing. The serial number is 58/99. 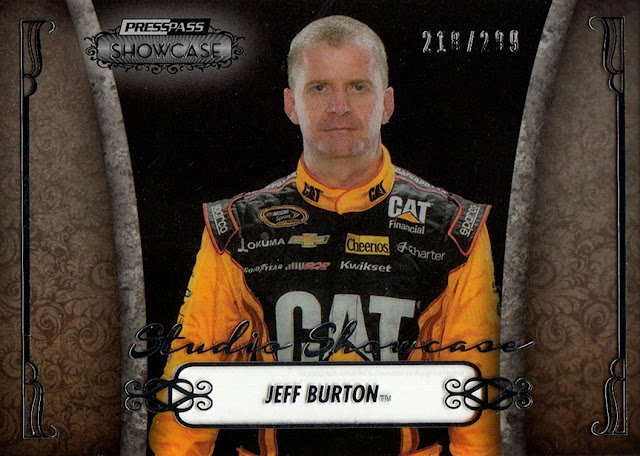 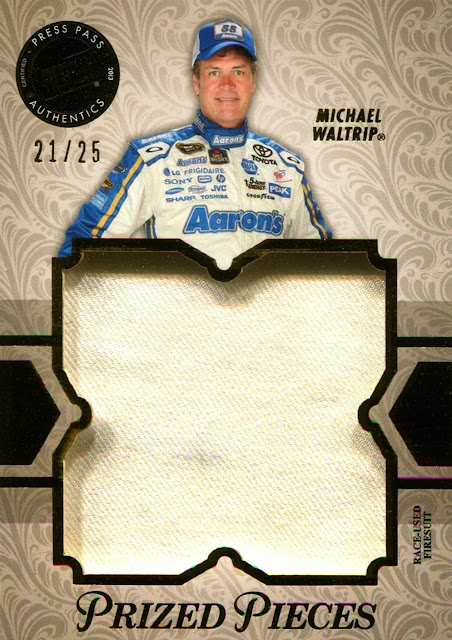 The second card out is a firesuit of Michael Waltrip. And what a big piece of firesuit it is! In fact, I think this may be the largest relic in my collection. Second largest for sure. As I was typing up the insert checklists to post to the Database, I realized this was actually a gold parallel of the basic Prized Pieces insert. The gold foil and being numbered to 25 tell you that fact. 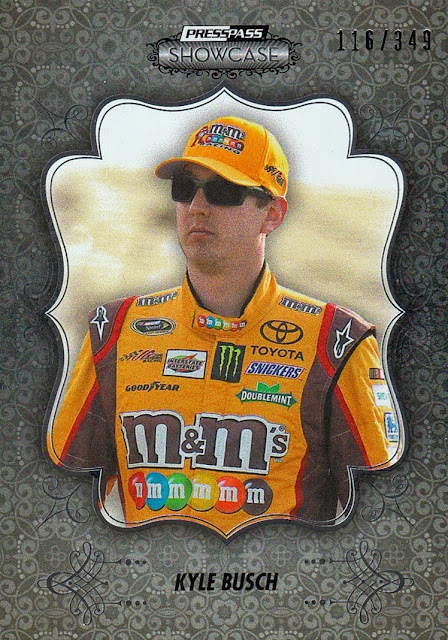 The base card for this pack is Kyle Busch. Not my favorite, but also not my least-favorite driver in the set, either. SN116/349. 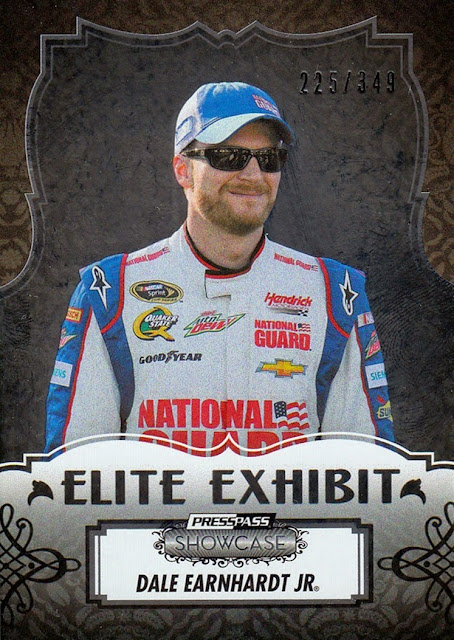 Another Dale Jr. card, can't complain about that! This is a different subset, but neither of them are really worthwhile, cards of the cars would have been much better. 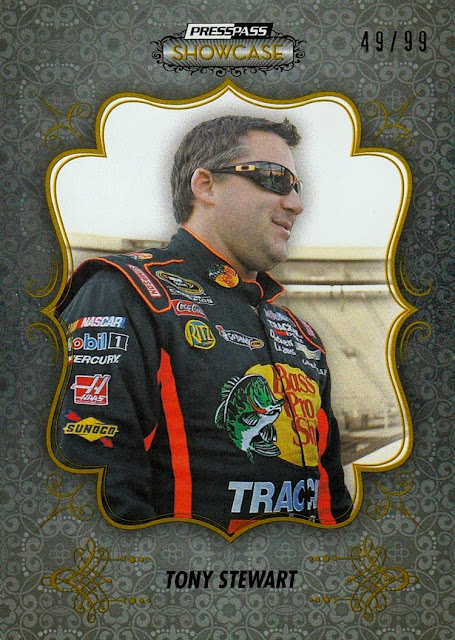 Parallel for this pack is Tony Stewart's base card.

Pack #3
The final full pack. I knew there was going to be an autograph in this one, or so I thought. 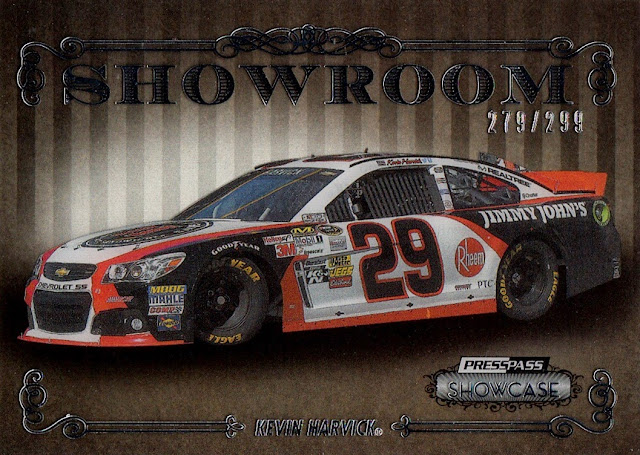 Finally, a car shot! Also printed on clear plastic, this is serially numbered 279/299. They even managed to get a special paint scheme. I'm glad they went with the Jimmy John's car instead of a fake censored Budweiser car, as well. I know it's not Press Pass's fault, but I loath the goofy fake junk they have to put on the cars instead of the real sponsor.

Now, what should be the autograph. But it's not. I got a redemption. I loathe redemptions- I have terrible luck with them. I am still owed cards from both Fleer and Upper Deck, (I know I will never get them) but the worst thing is I usually get the redemption cards after they have expired- I once pulled one from a Topps NBA set literally the day after it expired. If I ever own a card company (a lifelong dream) there will be no redemptions whatsoever- all cards will be inserted into packs. I'll post what the autograph is when it arrives from Press Pass- I need to hold out for a mailday post. I don't have a lot of mail days anymore. 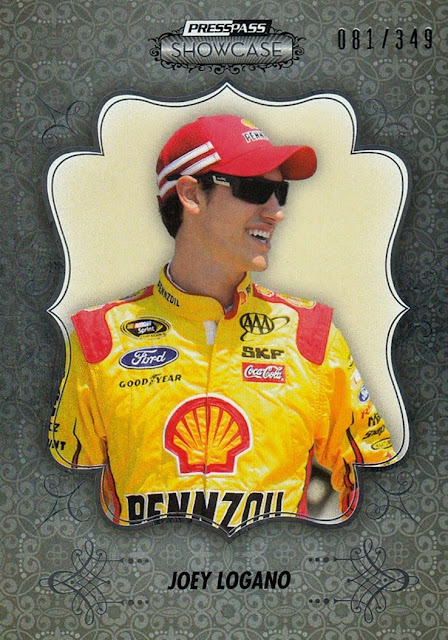 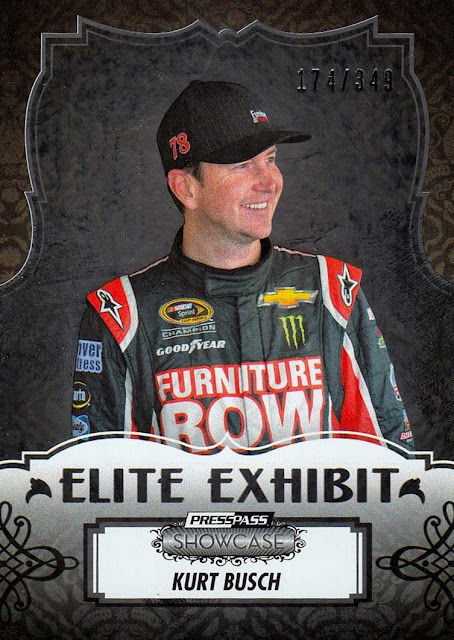 Another Elite Exhibit subset, this time of Kurt Busch. It's numbered 174/349. 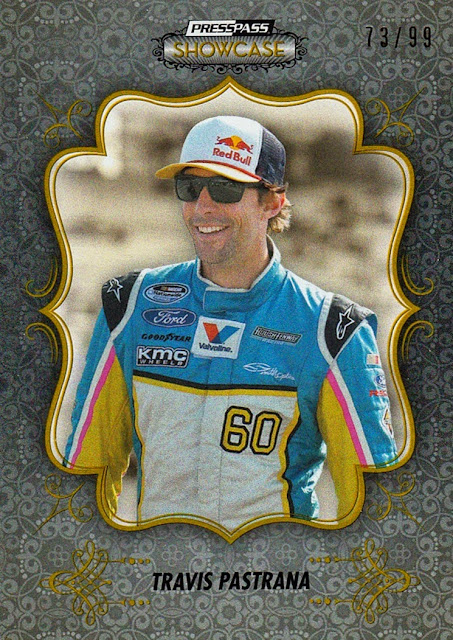 The gold parallel for this pack is of Travis Pastrana. I was surprised to see he was included in the set, and he's already out of NASCAR- the money ran dry. It's SN73/99.

Bonus Pack
Each box of Showcase includes a one-card bonus pack, which could be one of two low numbered parallels, or a special rookie card of either Danica Patrick or Ricky Stenhouse Jr. (Press Pass totally ignored the fact that Josh Wise also ran for Rookie of the Year in 2013) 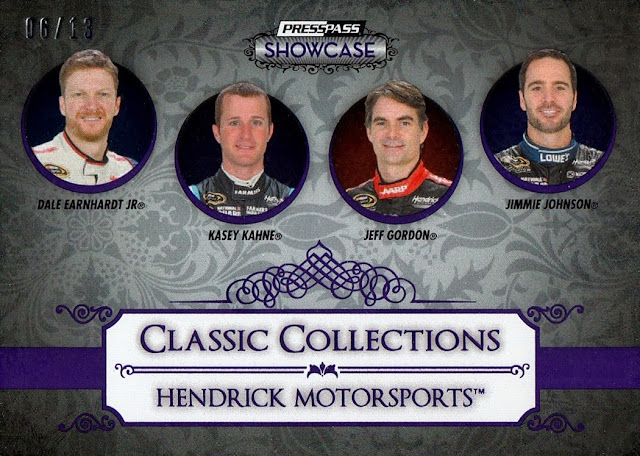 Overall, I am very happy with my box. It was definitely worth the $100, but had I spent $225 I would have felt ripped off. I was very unhappy when I did the box, not knowing for sure if the autograph would ever actually appear in my collection, but I am now fairly sure it will. It's of a driver I've always wanted, so I am looking forward to getting it.

Posted by Billy Kingsley at 2:56 PM