I discovered monster truck racing in 1986- I was two years old. At the time, it was a legitimate form of racing, whereas now it's a formulaic show, that you know before it starts exactly what's going to happen. (I no longer watch it). Also, as someone who has dreamed of owning a classic car my entire life, seeing them destroy them for fun is just too painful. But from 1986-1992, they were my favorite form of racing. (Then I discovered NASCAR, but that is a topic for another post!)

Back in 1988, I was already a collector. I already had a comic collection, and action figures, and mainly- what was my favorite hobby for a long, long time- 1/64 diecast replicas. Including lots of monster trucks. I no longer remember where, or when I got my first cards, but I know it was this set, and I know it was sometime during 1988. For many years, in fact, I did not know this was my first set. I thought that the 1977, 80 and 83 Topps Star Wars/Empire Strikes Back/Return of the Jedi cards my brother gave me (his duplicates that he got when they were new) were my first cards, but he remembered that he only gave them to me after I got the Bigfoot cards. I knew then that this set was #1, not number 4! When they were new, I only got about 25 of the cards. In April 2013, I bought a box on Ebay, but opening it was somewhat frustrating. There were many duplicates, usually the same cards in the same order, but I am still 10 cards short of the set, having 90 of the 100. The box also arrived just a few days before I nearly died and I didn't finish opening them for some time because of that.

It was the first monster truck set issued, and only three more have come after it. Leesley issued another set, but I don't know the year, and I've been unable to hunt any down. It was right around the same time frame- I have heard that it may have been issued in 1989 or 90. All I know is that it includes other trucks and has a gray border. I will post a Set Profile of the 1990 Classic release soon, it was the first set I ever completed. The 4th and as of now final set was issued by Topps in 2012, and was only available with the Hot Wheels replicas, which I generally no longer collect, but I did purchase a few of the 1990s trucks they did as throwbacks, like the Michigan Ice Monster.

To view full scans, front and back of 89 of the cards, and to track your own collection, here is it's page on the Database. You can also see which ones are on my wantlist as well. 1988 Leesley Bigfoot on The Trading Card Database Below are 10 cards that illustrate the set. 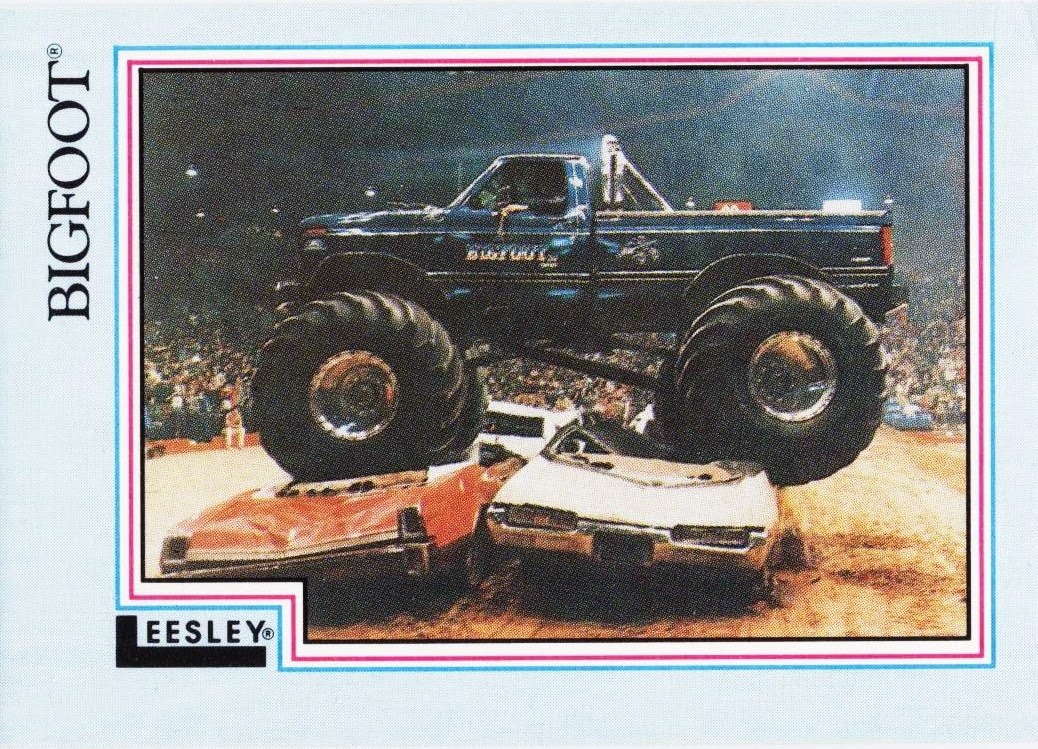 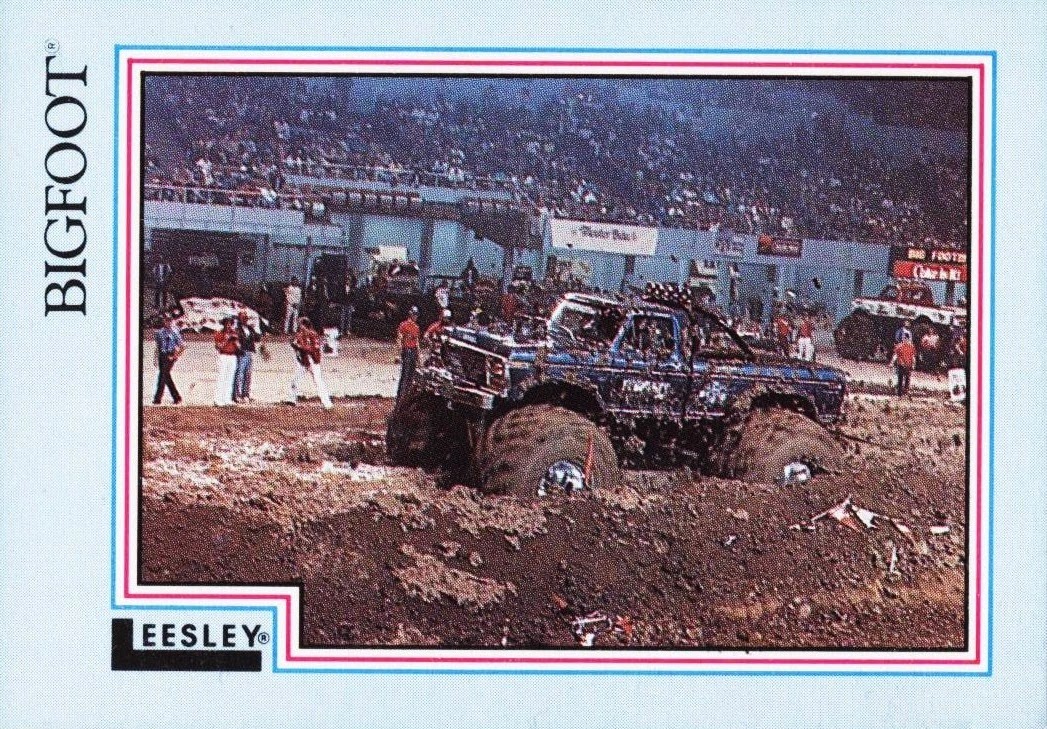 Mud bogging! I love mud bogging, and it used to be a mainstay of monster truck competition in the 1980s and early 90s. 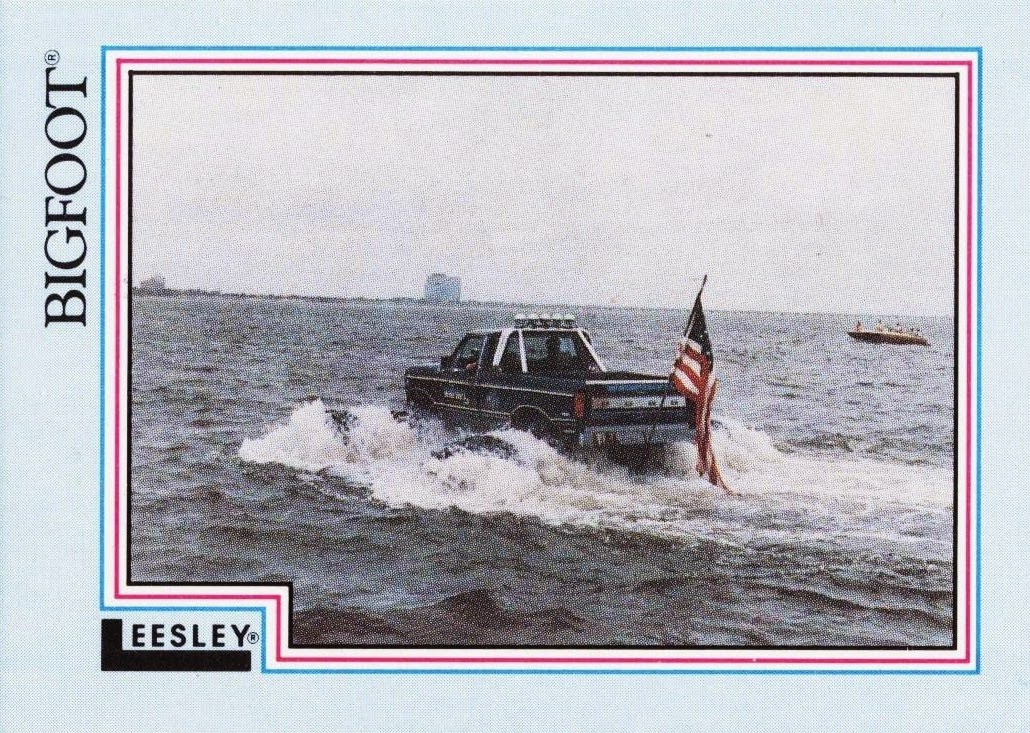 Back in the day, monster trucks used to be about doing stunts...now it's about destruction and nothing more, no longer do they do stunts like this. The large tires allow the trucks to float. Here Bigfoot 3 crosses Lake Pontchartrain. 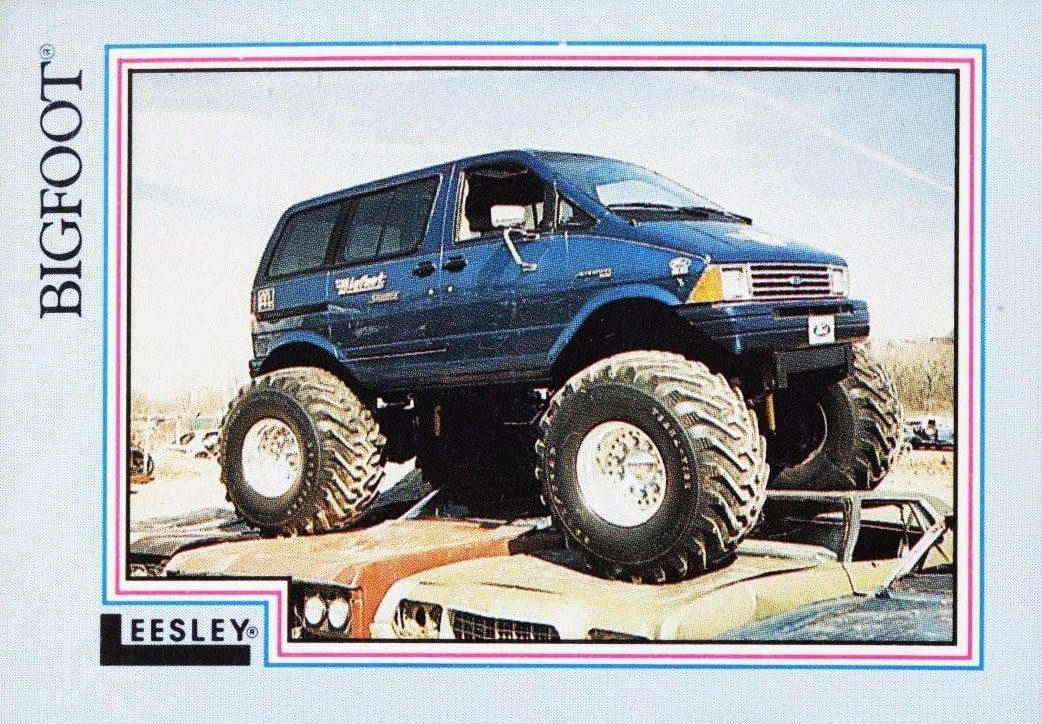 Bigfoot Shuttle. We had a Ford Aerostar in the same colors, but it wasn't quite like this :) 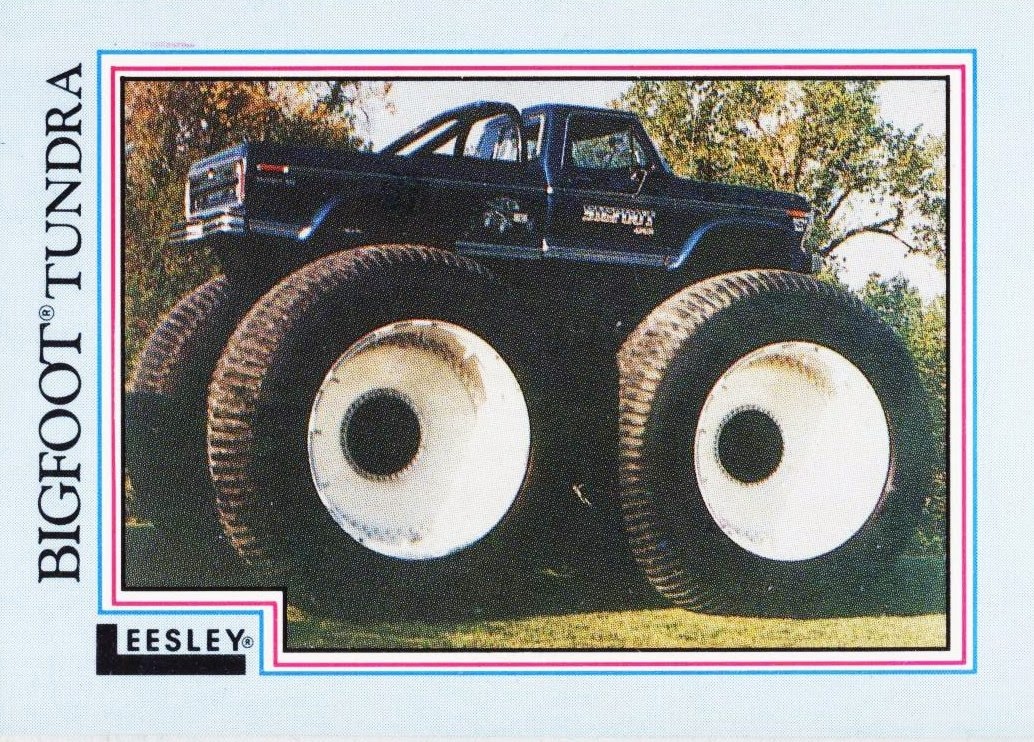 Bigfoot Tundra. A legendary truck. Those gigantic wheels and tires really made it stand above the rest- literally! 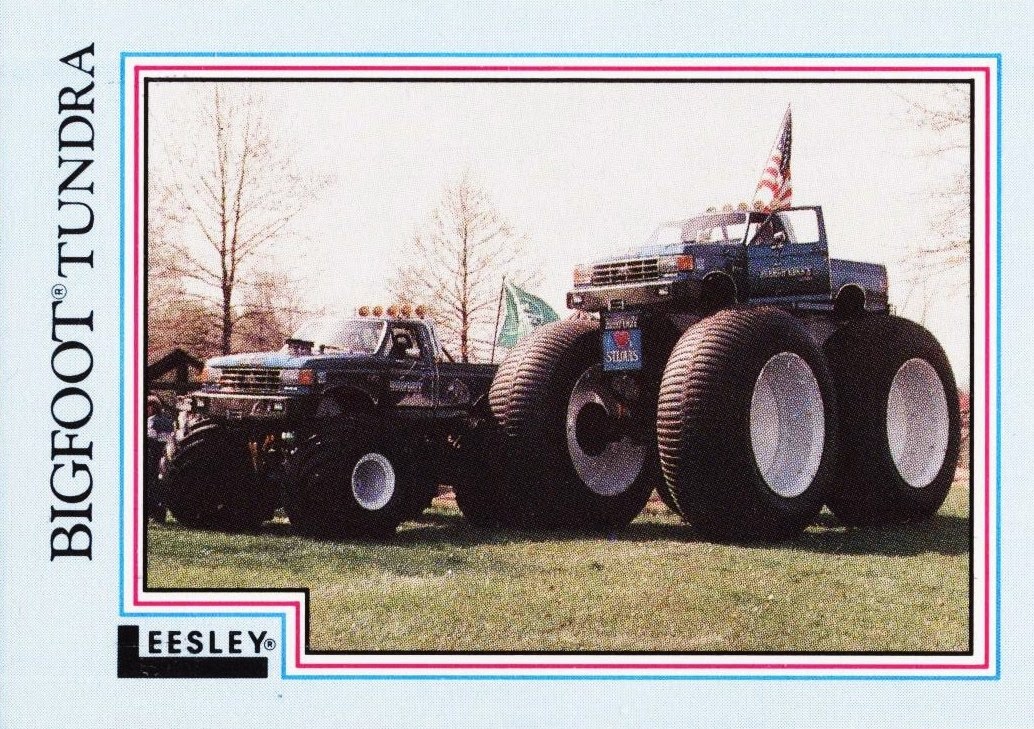 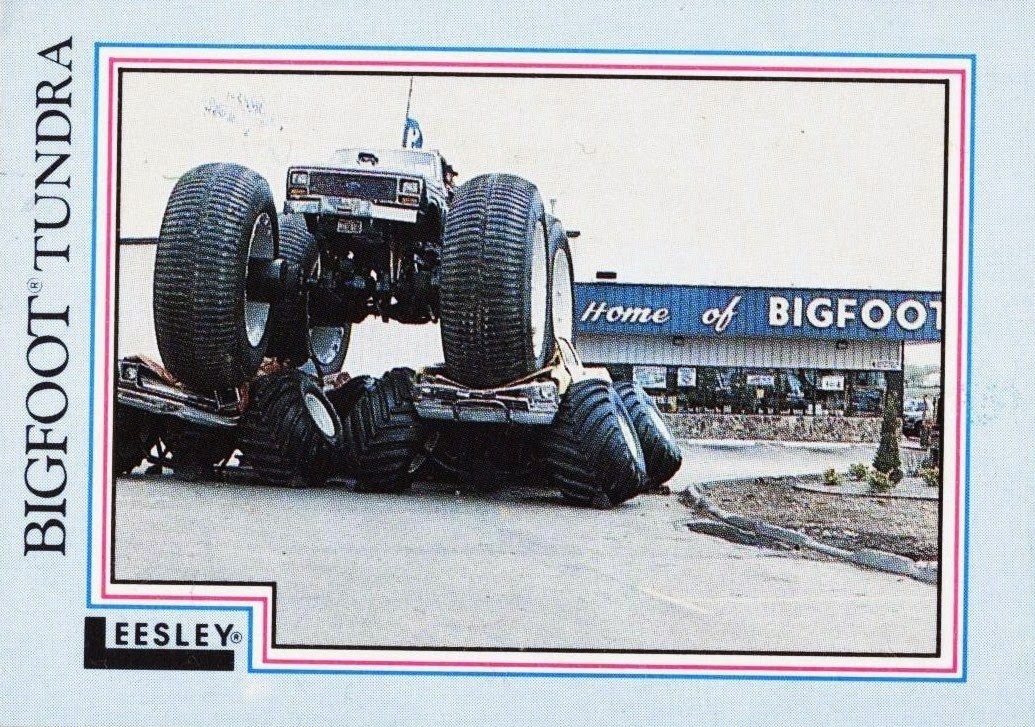 One of the most iconic stunts of the 1980s- when Bigfoot Tundra crushed not standard cars, but other monster trucks! (The Dodges were specially built by Bigfoot 4x4 to be crushed by Tundra) 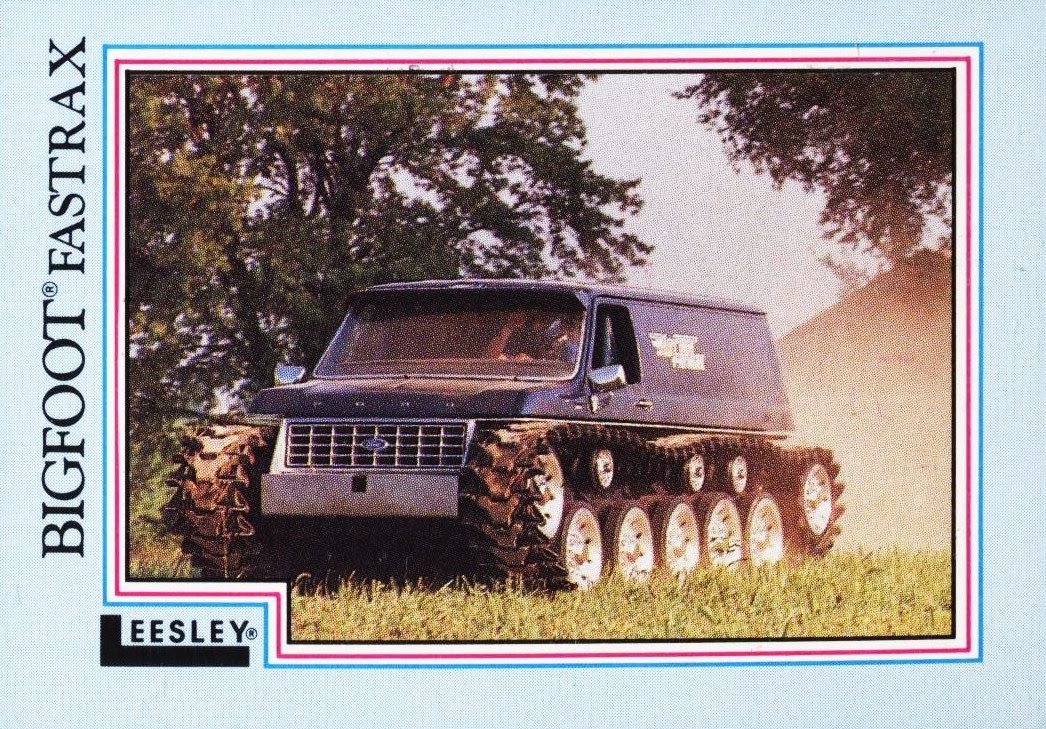 Bigfoot Fastrax combined a Ford cargo van with a tank. Because that's what they did in the 1980s. It didn't really take off, and there are only a few tank trucks left in operation today. 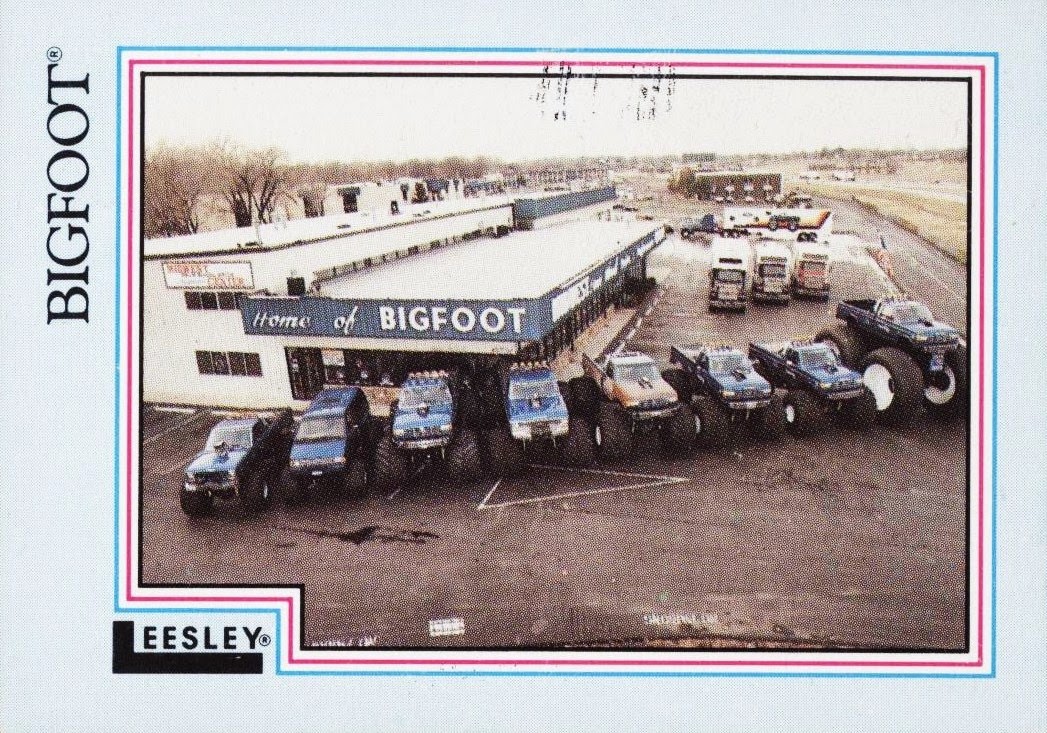 By 1988 the Bigfoot family had many trucks already. They are still in operation today and have built dozens of trucks. Unfortunately not all of these trucks survive. 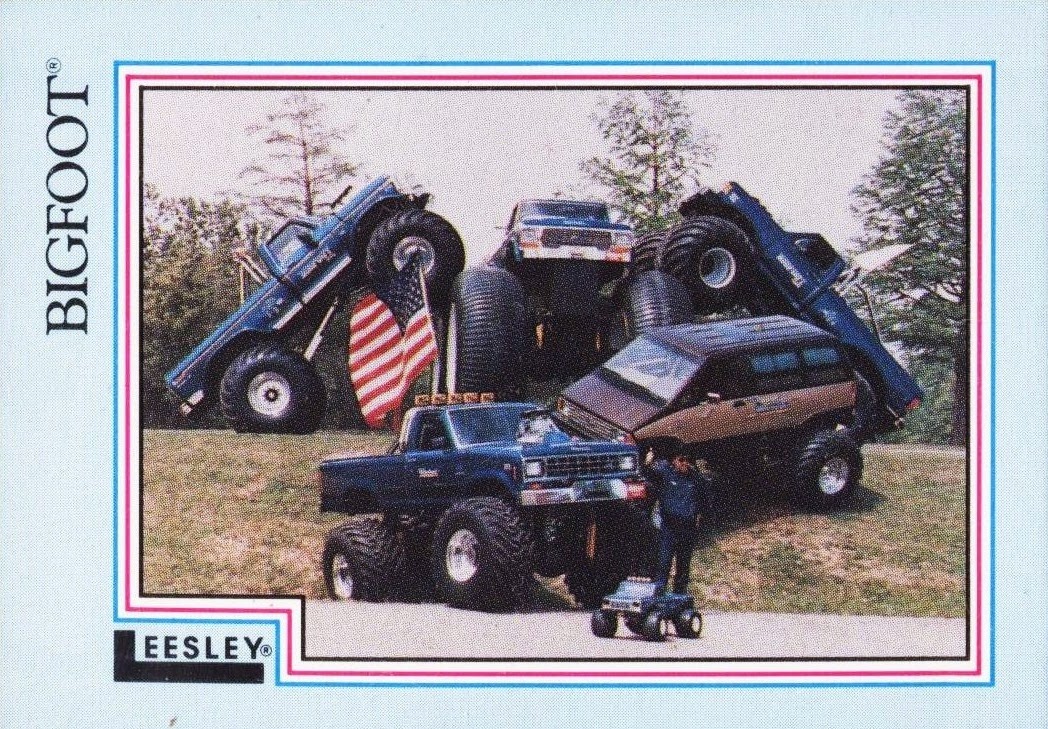 A great Bigfoot family portrait.
As always, thanks for reading!

Posted by Billy Kingsley at 6:44 AM