Blog Bat-A-Round: Cards you once had, no longer do, and regret it.

I have been reading on other blogs, something called a "Bat-A-Round" where multiple bloggers post their thoughts on a particular subject. (You can tell how much of the sports card blogging world is baseball oriented). As I spend much of my life thinking about cards, I rarely find a topic I don't have a thought on, so I thought I would post my take on it.

This Bat-A-Round's topic is cards you once had but no longer do.

For me, this is a small subject but a bit of a painful one.

I am very tight-fisted with my cards. If a card goes into my collection...it stays there. Forever. I will not budge, no matter what. (I even had somebody block me on Facebook because I would not sell a card to him). But back in 1996, when I first started collecting the NBA, I traded away one card...just one...and it's haunted me ever since. The crazy thing is I don't even remember exactly which card it was anymore.

I know it was 1995-96 Upper Deck, the Electric Court Parallel. I know it was David Robinson. But at this late date I don't remember if it was the base card, or one of the Subsets.

I think it was the base player card.

I have the USA subset in it's Electric Court version, but until I get the rest...it will drive me nuts. (The two I don't have, that might be it, are in the Top 10 most wanted list on the right side of every post).

I am still friends with the person I traded it to, all those years ago, but he had a house fire a year or two after we traded...so the opportunity is not there to try and get it back.

The crazy thing is that I could probably get both of the cards for under $5 combined. I have so far refused to do so, hoping against hope that I would get them "naturally"- without having to pay for them/it. So far, no luck.

That is the ONLY card I ever had that I no longer do.

There is more to this story though.

Remember back in February, I had a flood, lost several hundred cards. You can see which ones I lost and some pictures Here. I have already replaced some of them. Less than half, but some. The 2003-04 Topps Factory Set and the two Star Wars promos are going to be hard to replace. While I technically still have them, they are essentially lost to me. Some of them, like the 1991-92 Upper Deck Muggsy Bogues, are permanently fused to the next card they were touching. This is the painful aspect. My cards are my life, and this hurt...still hurts. I have found a few more that were in the box that I thought escaped damage but didn't, that aren't on that list. I have an Excel file of cards damaged that need to be replaced.

I've also had a few cards stolen. The key one was this one- 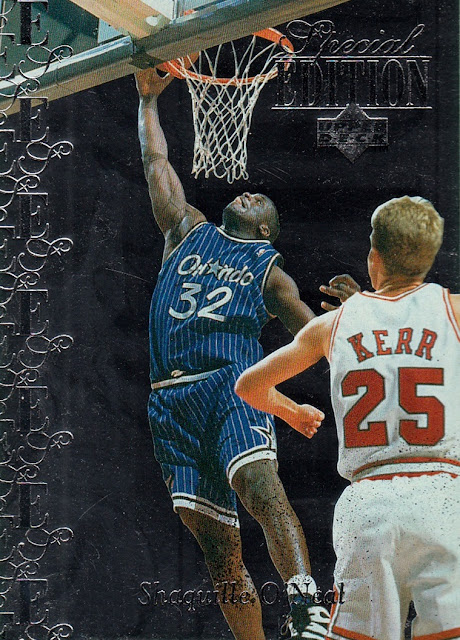 I made a big trade for one of these, and it was stolen...I am 99.9% sure by my school teacher, at that.
Luckily, at a card show several years later I was able to find a replacement. They scan like crap, by the way, as all mirror foils do. There were other cards I've had stolen but I'm sure I've gotten replacements for them now. I don't really remember what they were. This one was the big deal, and the only one I clearly remembered from the group stolen. Ironically the replacement is probably in much better shape than the one that was stolen, but I only got to see it for maybe 5 minutes before it was stolen, so I can't be sure.

As someone who keeps all his cards, this is a topic that hopefully won't ever grow. Especially as I've learned not to keep my waiting-to-be-scanned box directly under my window. I realize in previewing this post that this will only be my fourth blog entry of June...on June 30th. I really need to post more often. It is a little disheartening when you spend a lot of time, care and effort on a post, and get zero response. I do this pretty much totally for my own piece of mind, and I've not been in a very good place lately...I guess it shows with my lack of posts. I did just get a card I've been chasing for nearly 20 years in the mail today (it's still Monday for me) and a 1/1 in the mail as well so I may post another post tomorrow (the 30th) afternoon...depends on if I get them scanned or not.
Posted by Billy Kingsley at 2:34 AM