The New York Knickerbockers, more commonly known as the New York Knicks, are one of the NBA's three remaining original franchises, but the least successful of the three, coming up just short on multiple occasions. 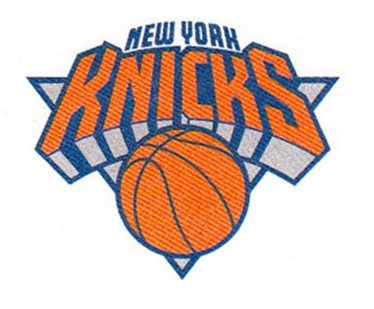 The Knicks are also the only team in the NBA that is more well known by it's abbreviation, rather than it's full name.

During the Knicks' long history, they have been stable in the uniforms worn, wearing essentially only four designs- although there are variations on most of them. The team colors have been orange and blue for the entire history of the franchise.

The earliest Knicks jersey was simply solid white with blue lettering and orange borders. I do not have any cards that show this jersey, but it does appear in the 1948 Bowman set, which you can see here. The original road jersey was solid blue with orange lettering and an orange stripe to match the home whites. To my knowledge this jersey does not appear on any cards at all.

In 1952-53 the Knicks, now part of the NBA after the 1949 merger of the BAA and NBL, kept the same font and color scheme but instead of solid orange borders, they now were blue and orange squares, on both the home and road jerseys. The Knicks have worn this design as throwbacks, beginning in 1996-97 for the NBA's 50th anniversary, and most recently in 2015-16. The main difference is that the original jerseys did not have the player's names on the back, where all Throwback versions did.
These striped uniforms would be worn from 1952-53 through 1960-61.

The Knicks wore a different jersey from 1961-62 through 1967-68, again in blue and orange, which featured a blue and orange stripe under each arm hole and white text with orange outline on the road uniform. It also featured a triangular design on the pants and was the first uniform to have a logo on the pants. (NY lettering). This did not appear on any cards while being worn, and again, the road jersey does not appear on a single card known to me. It did, however, appear in the 1981 TCMA set, which will be seen many more times during the course of Uniform History, as it included color photos of many early players, and thus uniforms, that are rare to see on cards.
In 1968-69, the Knicks were on an upswing. Willis Reed, who had been drafted in 1964, was at the peak of his career, and was joined by Walt Frazier, Dave DeBusschere, Bill Bradley and others and powered their way to two NBA Championships. The footage of Reed limping onto the court during the 1970 finals is one of the most iconic in NBA history, still played often on Knicks broadcasts to this very day- since at least 1995-96 it's been shown at the very least once per season, usually more than once.

The Knicks debuted new jerseys in 1969-69, and the style debuted that season would come to be the iconic Knicks jersey- after a brief hiatus in the early 1980s and again in the 2000s, they are back to wearing the same basic design.

Note that the blue was noticeably darker in those days.
In 1978-79 the Knicks added the NY letting to the leg. See below.

The 1979-80 the Knicks debuted a new jersey design that was then and remains the largest departure from the norm for the Knicks. Featuring a totally different font, darker blue and, most unusually, the team name under the number, these jerseys would be the shortest lived in Knicks history, lasting only three seasons. The design has been worn as a throwback, but with the current, lighter blue that the Knicks use.
I believe that the 1980-81 Topps team poster is the only card ever to show the home white design of this jersey in a non-throwback form.
The Knicks returned to their traditional design in 1983-84, with the modification of having the jersey number be repeated on the right leg of the jersey. The number would remain on the leg until 1986-87.
With the extremely limited number of cards issued during this time, there are none known that show the home white with the number on the leg.
The number was removed from the leg in 1987-88. The jerseys were identical to those worn in 1978-79, with the NY logo on the leg. These were worn through 1990-91. The blue is now the lighter, medium blue that the Knicks have worn ever since.

In 1991-92, the NY lettering was replaced with the Knicks logo, and this Knicks logo would be worn only during 1991-92. Both cards shown are from 1992-93, which is interesting to note that Rolando Blackman joined the team in 1992-93, which means that this photo was taken before the new logo was prepared.

The Knicks debuted a new logo in 1992-93, which is basically the same logo shown at the very top of this post. The words "New York" were added for 1995-96, and in 2012-13 the black drop shadow was replaced with gray. The new logo replaced the old logo in the 1992-93 season, and would remain on the leg until 1996-97. The words New York were NOT added to the jersey, although they were added to the logo.

The Knicks debuted the new, black stripe design as an alternate jersey in 1995-96, and would wear it as an alternate in 1996-97 as well. In 1997-98, the alternate became the new standard road jersey, and a new home design, with a wide blue stripe, would be created.

In 2001-02, the number and logo were eliminated from the stripes on the legs, and the side stripe width was decreased. The Knicks logo was placed into the field on the right leg.


In 2012-13, the Knicks went back to their history, and brought out a jersey very similar to the ones they wore from 1992-93 through 1996-97. The New York writing does not have as much curve to it, and the borders around the arms no longer make a complete circle. The leg patch now does have New York, instead of just the logo.

One-offs and Specials
The Knicks have worn several one-off and special uniforms. The earliest, not counting the alternates that became standards, is a solid green jersey worn solely on St. Patrick's day. The Knicks are one of several teams to have done this- beginning in 2006-07- but they don't do it anymore. I am unsure of when they stopped, and there are no cards known to me to show the green jerseys.

The Knicks debuted an orange alternate in 2013-14, but I do not know if they still wear it. I did not see any games with them wearing it during 2015-16 but that doesn't mean I didn't miss it.
The Knicks have taken part in the NBA's Spanish language initiative on multiple occasions, and have worn the Spanish jersey in normal and sleeved form. It is the only sleeved jersey the Knicks have worn.
I do not have a card showing the normal jersey, but you can see a scan of one here, on the Database.

There are no cards showing the Christmas jersey from the 2014-15 or 2015-16 jersey designs for any team. the 2014-15 Christmas jersey featured the player's first name in a panel on the back, and the team's alternate logo on the front over the number. They were not well received by the media or fan base and none of the 8 teams which used them, as I stated, appear on cards. The Knicks did not take part in the 2015-16 Christmas program.
Posted by Billy Kingsley at 7:10 PM