An interesting set, certainly not one that would be produced today. The set is composed of 48 cards, broken down in several numbering systems- 16 aircraft, 12 ships, 4 each of Iron Cavalry (armor), fortifications, field artillery and 8 Miscellaneous.

Keep in mind that 1939 was the official start of World War II. (Technically, fighting between Japan and China has been going on before that date, but is not generally considered part of WWII, but the Sino-Japanese war). This is a set that included both Allied and Axis equipment....seemingly objectively. The back of the card even asks, in big, bold letters...Can American Maintain Peace? We all know, of course, that peace was not a word much in use in that time period, and we would not be able to stay out of the war.

It just kind of shocks me how...matter-of-factly it handles the text on the back of this card. The only one I have (so far) is of a Nazi plane, and there's a simple statement of facts...no opinion whatsoever. I'm not used to that...growing up in the "Racism & Hatred as a political platform" era, seeing no bias at all on the text of a weapon in the hands of clearly bad people is surprising to me. I would be curious to see how the text on the Japanese subject cards is written.

As a history buff, I have long maintained that the only good and accurate way to write history is to present facts without bias, but the Nazis were so bad that that rule is not expected or even truly acceptable, they were the bad guys and there's no denying it.

Someday I want to complete this set. 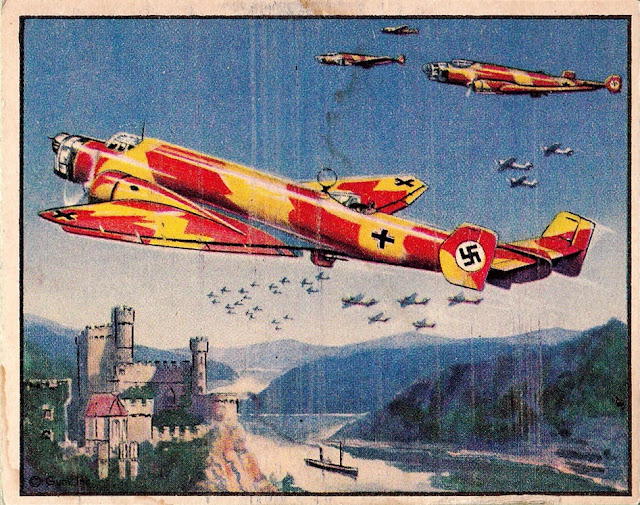 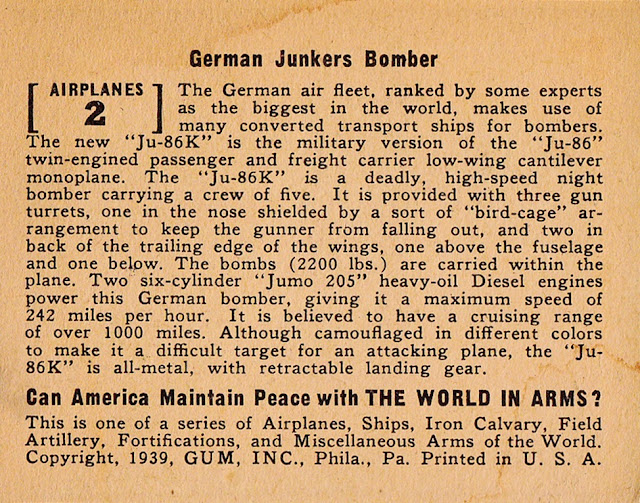 I'm not sure how accurate the artwork is. Red and yellow camouflage  seems like an odd choice- and not one I've ever seen anywhere else, despite the fact that I hang around with military modelers on a regular basis. I should do a little more research on that.


The stance of Gum, Inc. would be noticeably different on the 1942 War Gum set, one of my favorite non-sports sets, coming soon.
Posted by Billy Kingsley at 6:47 PM