The sad state of Olympic cards

I love the Olympics. I look forward to each event every 4 years, (both Summer and Winter) and I will watch Olympics almost exclusively during their time. I will watch just about every sport, but I can't get into soccer.

Already today I've watched: Basketball (both men's and women's), field hockey, archery, water polo, judo, table tennis, beach volleyball, gymnastics, and yes, even a few moments of soccer. I know swimming is still ahead of me on the docket.

As a sports fan and card collector, I'm used to collecting cards documenting the sports I love. True, they fall short of what they should be, but...it's something.

For the Olympics, that is simply not possible.

The Olympics are great because it's all different kinds of sports- not just the 6 that SportsCenter covers. And while I am a supporter of Team USA, there is a lot more to the world of sports than USA.

Especially in the Olympics, which is where players from many various sports come together to represent their country...there are more than 200 countries competing in the Rio Olympics. 200!

There will be NO cards issued to commemorate the events. The winners will have nothing produced to celebrate their wins. If you want to know who won an event in a past Olympics...you're out of luck, because you can't read the back of a non-existent card to find out. 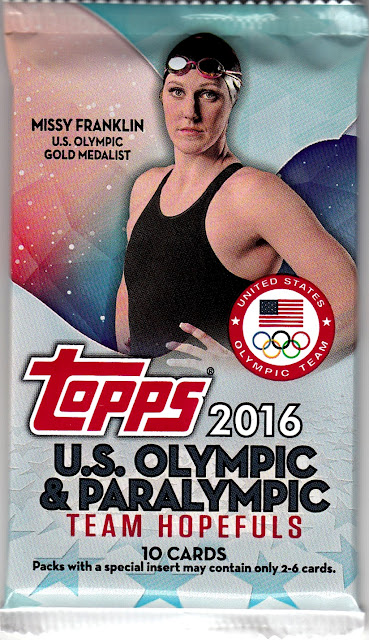 Team Hopefuls. Not even the actual team members! And even if they were the team members... the set is 75 cards. Seventy. Five. The US Olympic team is 554 people! I don't even KNOW how many people make up the Paralympic team, because they don't get any coverage at all other than the cards.  It's probably more than are included in this set.

That's....disgraceful. But wait, it gets worse. Of the 75 cards in the set, at least 10 are not even current athletes, most of the cards higher than #61 are people long retired. They SHOULD be on cards...but they should NOT be part of the set based (loosely) around the current Olympics. An insert, sure, but base cards, taking away spots from actually competing athletes? No thank you!

And the people from the other countries? Forget it. They could be the greatest of all time in their sport, yet they get nothing. Not a single card, ever. If it wasn't for Sports Illustrated for Kids giving a card to Usain Bolt, there would not have been a single card for a non-American athlete in the 24 years I've been a die-hard Olympic fan.

This is not right at all.

There should be an Olympic set that covers each event, with the medalists AT LEAST getting cards, even if the non-winners don't get covered. It'd be better than nothing, which is what we currently get.
And the athletes from other countries besides the USA should get cards. I don't care if they are from countries our government says we should hate like North Korea or Iran. If they compete for a medal, they should have a card. Period!

But we get nothing.

And there's not a darn thing I can do about it... Except make this post, and hope somebody who can make it right sees it.

I know the chances of that are about as likely as me actually competing in the Olympics. Yeah, that's 0%.

But I can't be silent.
Posted by Billy Kingsley at 8:25 PM

Email ThisBlogThis!Share to TwitterShare to FacebookShare to Pinterest
Labels: Olympics