Sets in my Collection #3: 1911 Heroes of History/Men of History

The third oldest set in my collection was the one that was my breakthrough into the world of Tobacco cards. For years I thought I would never get back into the early days of cards, but I was finally able to break into that field a couple of years ago, thanks to Ebay

History is a passion of mine and there are very few sets that include ancient subjects- my favorite time in history is the Roman Empire. This set includes three Romans in the set, but I have not been able to track down the Nero card, and I forget which other Emperor is included, possibly Augustus.
Regardless of which it was, they are high on my wantlist.

The first 50 cards are titled Heroes of History, the second 50 Men of History, from what I was able to determine on the internet. 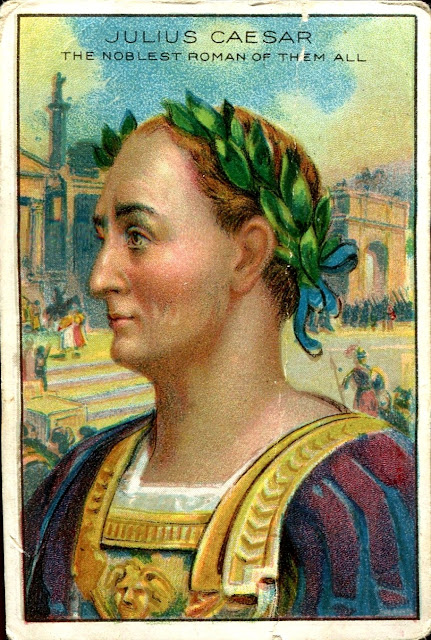 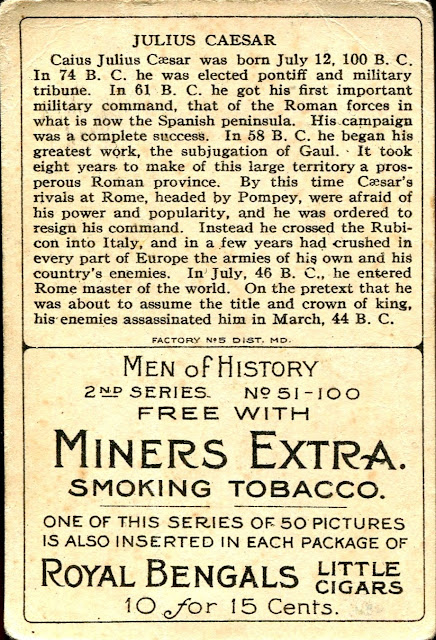 
Note that the car references cards #51-100 yet the cards are not actually numbered on card. There was likely an album issued that had the numbers and spots designated for each card, however the peripherals for early cards are extremely rare and the highest number of surviving copies for any set I know of is 4. Four...that's not a typo. (With the caveat that there is more I don't know than I do)

Someday I'd like to complete this whole set- it's all history related.

By the way, I'm not sure how accurate the drawing is. Caesar was balding and actually petitioned the Roman Senate to wear his laurel wreath all the time to try and hide it. (they granted that request)
Posted by Billy Kingsley at 10:20 PM