Working on scanning, as always...came across one I got a couple years ago that when I got it, was just another card...but now, it's different. 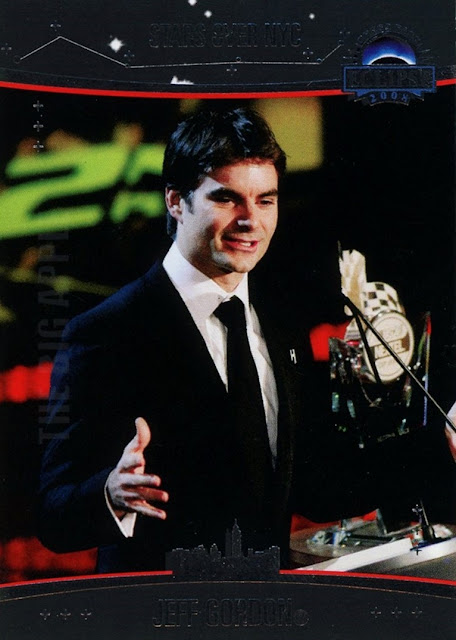 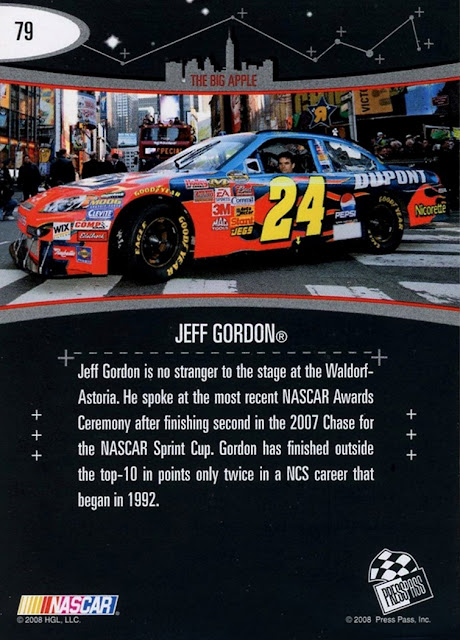 I have a lot of Jeff Gordon cards, more than any other person in fact. But this one stands out...because now I've been to Times Square! When I got this card, I didn't think that I'd ever get there. Turns out it's less than an hour and a half from home.

Honestly, if we had known how easy it was to get to...I would have gone down for the NASCAR celebrations that were once held there. The annual awards banquet was held in Manhattan from the early 80s until about a decade ago, when they stopped because too many NYCers complained about the traffic delays. They moved it to Vegas, and now this year it'll be in Nashville for some reason. (A city NASCAR has pulled out of twice). It should really be in Charlotte, but no, NASCAR won't put it there for reasons known only to NASCAR. For selfish purposes I wish they were still in NYC.

Something a lot of people probably don't know is that New York State has the second highest number of tracks raced at in NASCAR history, behind only North Carolina. They only race once a year here now, in Watkins Glen, but in the early days NASCAR was much more national than it has been at any time since.

I posted about my trip to Times Square right after it happened, back in January 2019. I also visited Madison Square Garden that day, a fun trip...I don't really need to repost all the pictures because they are already posted and labeled there, so just hit the link if you want to see them.

I know there are other cards in this subset...I know I don't have them all but I am looking forward to the next time one randomly comes out of a box I'm scanning.

Posted by Billy Kingsley at 4:30 PM