Tracking my NHL collection after the 2019-20 season

This has been a crazy year. I think we all know that. Who could have predicted that my NHL end-of-season wrapup would be written on October 5th, instead of June somethingth? Yet, here we are.

This is something else unusual, in that we have no real idea when the NHL will play again. Normally the new season starts this very week, and I would be anxiously awaiting it after several months without hockey. This year, the break came during the season, for 4 months, everybody played in a bubble and the season took 51 weeks to complete. And no one knows when hockey will be played again.  If any of our writing survives into the distant future, people who didn't live through 2020 will likely look at the records and think "that can't be right"...but it is.

I normally write up the end of the season review the day after the season ends, but I have been so busy with my scale modeling that I didn't have time to do that...and I'm depressed about the Rangers cutting my all-time favorite player. Why do they always make the wrong choice? I digress. Now, finally, it's too cold to work on models, so I finally have time to write this post, and do the work required for it. Not that taking screencaps is really work.

As usual, all information is provided by the Stats page on the Trading Card Database. One thing that's different now is that I am no longer tracking the 1990-91 through 1992-93 Upper Deck sets on the Database. They put the parallel into the base set checklist, and basically make it useless, so I now only track them on paper. So, the numbers will be slightly skewed going forward, but they were never truly accurate to begin with...what with them tagging team, League Leader and multi-player cards to each person that appears, not truly cards of that person or team at all. So this is just a basic concept until I finish scanning everything myself.

Using my posts from previous years, I'll look and see how the top 10 in the three main categories have changed...

I begin with the players: 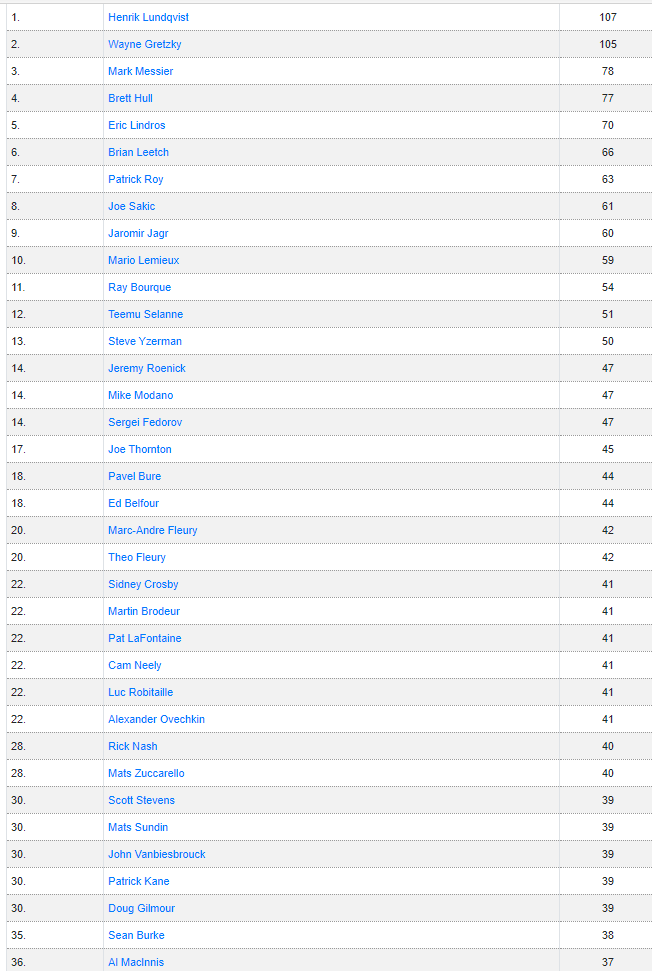 Finally, the King holds court, taking the top spot from the Great One, and also being the first player to clear 100 cards! And the only one- actually speaking Gretzky ends the 2019-20 season at either 96 or 98 cards in my collection, I forget. It's the first time since I began tracking the stats at season end that there is a change in the lead. I don't know if he can hold it forever, as players in the 1990s got a LOT more cards than players today, since there were many card companies instead of one. As it turns out, there is a lot of change in the Top 10 this year, largely due to that huge purchase I made of early 1990s cards at the one and only card show I went to in 2020. Mark Messier and Brett Hull in 3rd and 4th place are the only two spots in the top 10 that did not change from last year. Eric Lindros jumps up to 5th, after not even cracking the top 25 last year, all due to that card show that yielded at least 40 new cards of him. It's the largest jump in the three-year history of the project...and may hold the record going forward as well! Brian Leetch drops one spot to 6th, and Patrick Roy jumps from 10th to 7th. Joe Sakic drops from 7th to 8th, and Jaromir Jagr drops from 6th to 9th...I'll have to change that. Mario Lemieux holds down the 10th spot. Dropping out of the Top 10 is Teemu Selanne, who falls to 12th. Interesting to note that the two Fleurys, who are not related, are tied. Mats Zuccarello, my favorite skater, makes the screenshot for the first time. Totally missing is Vincent Lecavalier, who falls all the way to 41st, in a tie with Paul Coffey, P.K. Subban and Pierre Turgeon with 35 cards. Lecavalier held the #1 spot at the time I began collecting the sport, since he was (and still is) my friend's favorite player, the friend who sent me 2000+ cards back in 2015, including his duplicates, which put the Lightning and Lecavalier at the #1 spots. 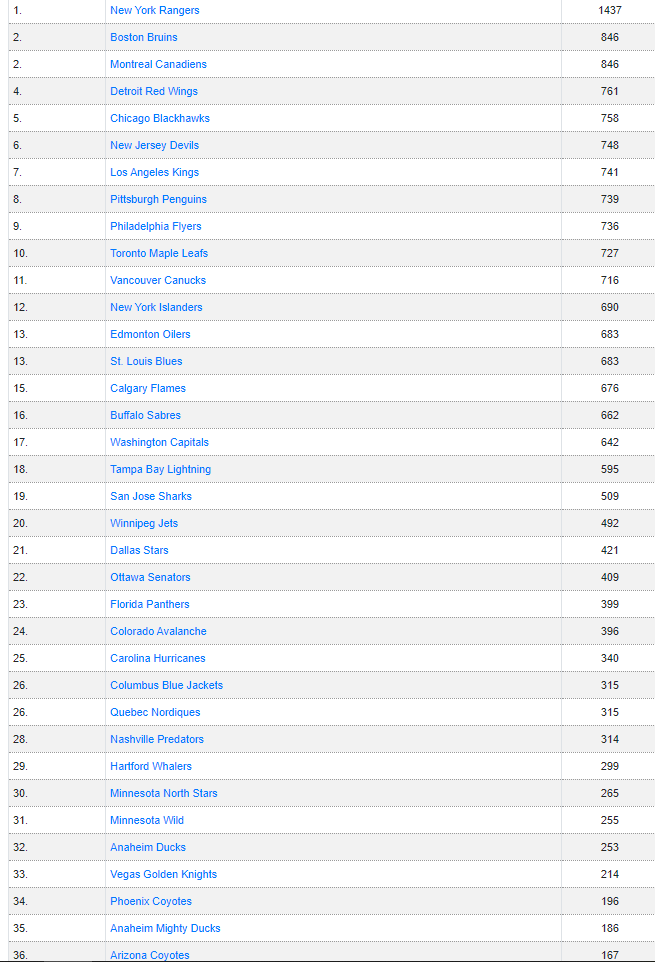 The teams stay somewhat more stable down the middle, but there is massive movement in the top 10! The Rangers jump from 871 to 1437, due in large part to back in November when I got most of the 70s and 80s Topps Rangers cards. The lead the Rangers have over second place moves from 210 to 591, meaning that the gap between teams, if it was cards, would rank 19th among all teams...wow. I don't forsee the lead changing hands ever, so watching the gap will be fun. Second place changes again. I've done this three years, after my three full seasons watching the sport, and it's been a different team each time. First the Devils, then the Canadiens, now the Bruins take the second spot! But wait, looking closer, they are TIED! But not really. Huh? Part of that purchase I made in November included two Bruins cards that were in such poor condition that I didn't list them as part of my collection. Even though they are in my possession. So the Bruins actually do hold 2nd by themselves. The Red Wings jump from 7th to 4th, a big jump. The Blackhawks jump from 10th to 5th, making the entire top 5 composed solely of Original 6 teams, for the first time ever. That's interesting, because I don't really have access to a lot of cards from the Original 6 era- however the November purchase included about 3/4ths of the Parkhurst Missing Link cards, which are all Original 6. That must be what did it. The Devils, which had been 2nd just two years ago, drop to 6th. The Kings, which started in 6th, moved to 5th, and now dropping to 7th. The Penguins drop from 6th to 8th, and the Flyers make a huge jump- from 14th to 9th. The Maple Leafs, the last Original 6 team, are in 10th, 22 cards away from putting all the Original 6 in the Top 6. The Canucks are the team that the Flyers knocked out of the Top 10. Looking deeper, I find it interesting that the Sharks and Jets have held 19th and 20th in all three years. (The Database combines both Jets franchises, I do not, another reason I don't consider these stats accurate). Some other teams have held steady over the years as well, although changing position, they have not changed more than one spot. The Sabres have either been 16th or 17th, the Capitols either 18th or 19th, the Hurricanes either 24th or 25th, and the Stars and Senators have swapped 21st and 22nd between them. The Panthers started 25th, moved to 24th and now are 23rd...I will be curious to see how they rank next year. 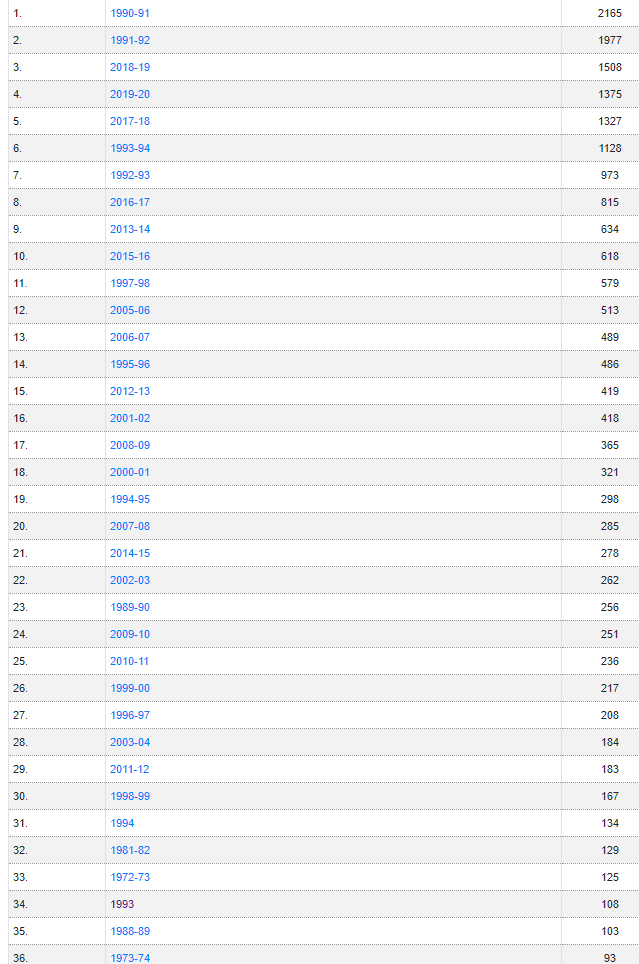 The seasons are the last of the "big three" stats, although the Database provides 5 different stats. It's fun to me to see how the current season places in with the cards added only during that season. As it turns out the 2019-20 season is the largest total of cards added during that season, coming in at exactly 1375, good enough for 4th place all-time. That is due to the fact that I got a hobby box of both UD series, O-Pee-Chee and Topps Stickers, which all adds up quite a bit. The one I wanted to key in on was 1993-94, which is the year most of the card show 90s purchase contained. It was enough to move 1993-94 from 10th to 6th, exactly 700 new cards since last year. 1997-98 is the year that drops out of the Top 10, falling from 7th to 11th. I added less than 100 new cards to that season. 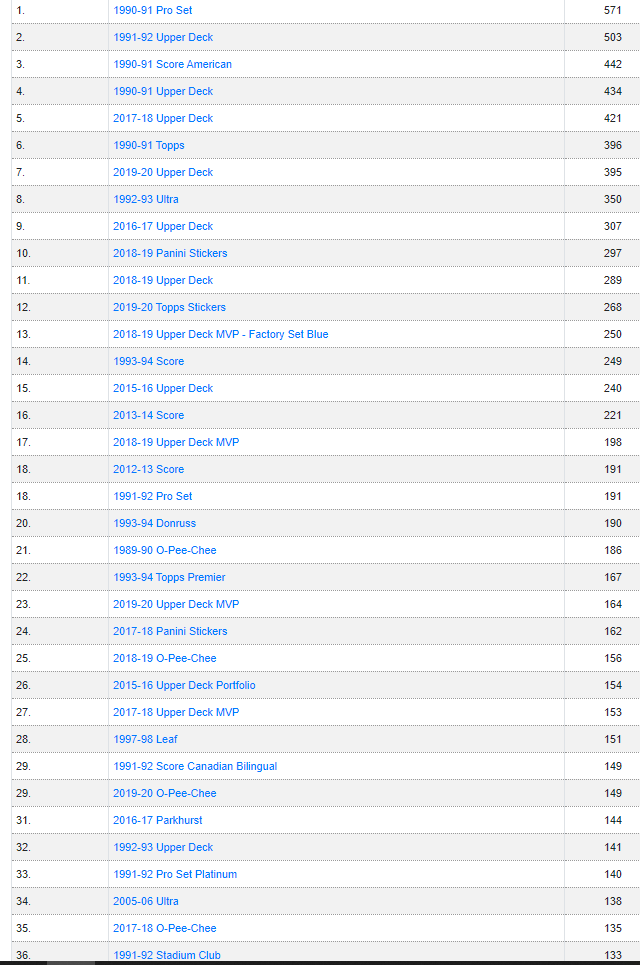 The sets can really change a lot from year to year...even a blaster is enough to move a set into the Top 25, and a hobby box of the right set can just about put a set into the top 10- note that the 2019-20 Topps Stickers jump right to 12th on the strength of one box! 1990-91 Pro Set has held the top spot since I began tracking this info, and it's one of my favorite sets, so you won't see me complaining about that. 1990-91 Score American, thanks to the Factory Set I got as a gift this season, jumps from 25th all the way to 3rd, it can't get any higher since I have completed it! 2019-20 Upper Deck is the only set from this year to break into the Top 10, and it knocks out last year's set, which I didn't do a hobby box of either series so I'm surprised it's so high. Last year's MVP factory set, which is complete, also falls out of the Top 10. 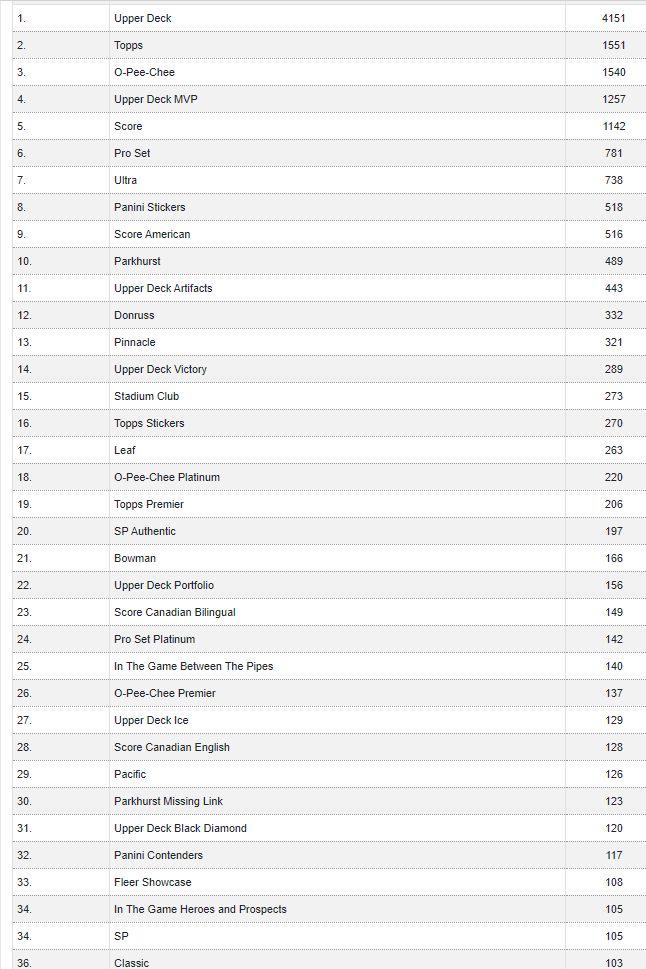 Looking at the brands, Upper Deck has such a huge lead that I doubt it can ever be caught...that's what happens when you produce a 500 or more card set every year for 30 years. The lead UD has over Topps is exactly 2600 cards...that would be 2nd itself if it were a thing! Really puts it in perspective to me. Topps moves up to 2nd due to getting the 1990-91 Factory set and the 70s and 80s Rangers (and others). O-Pee-Chee drops to 3rd, but I suspect it will retake 2nd because O-P-C is still issued while Topps has not been since 2003-04. MVP drops to 4th, while Score moves to 5th, from 7th. Pro Set holds 6th, which is pretty amazing because they only issued three sets! And one of them has only 11 cards in my collection! Ultra drops to 7th, while Panini Stickers hold steady at 8th. The Database counts Score American differently from Score and that alone ranks 9th now, again on the strength of a factory set. It knocks Artifacts out of the top 10. The fact that Artifacts ranked in the top 10 really tells you how much being available at retail in blasters really shapes my modern collection. Parkhurst holds on to 10th.

My oldest and lowest SN card are the same as they were last year, no change there. Since my lowest SN is 1/1 I doubt that will change, but my oldest might someday.

and in case you are wondering, I actually transcribed all this info over to an Excel chart to make it easier to reference from year to year, LOL.