In fact, it was one of only two Topps flagships not in my collection yet in any way, with 1958-59 being the only other one, although 1961-62 has not actually gotten to me yet, it's in my COMC file for over a year now, awaiting shipping.

I decided it was time to change that, so I went to ebay and as usual I had it sorted "Lowest price+shipping" and lo and behold, the very top card listed was a Ranger! There wasn't any serious flaws with it, so I took it as a sign...and took it home. 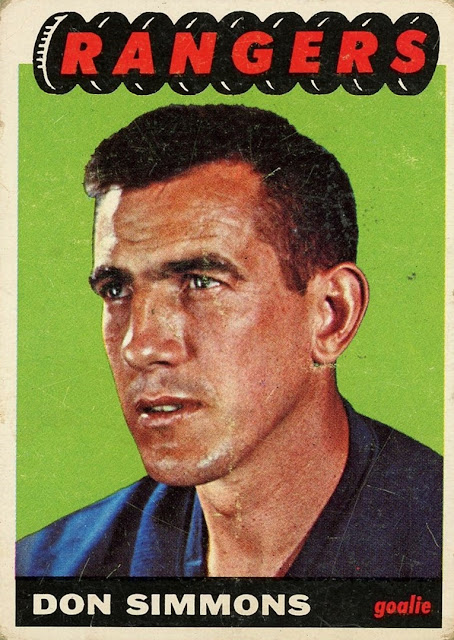 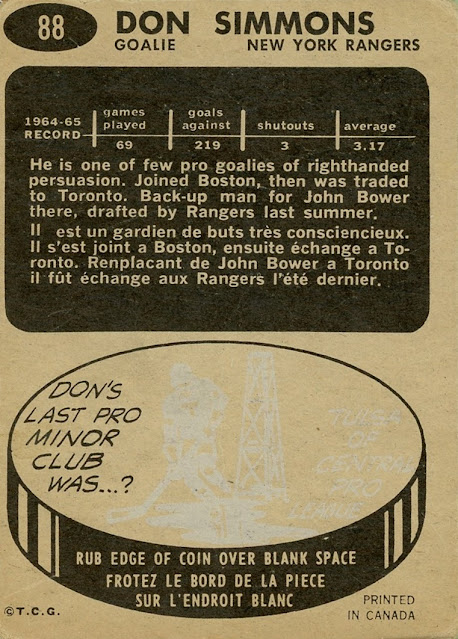 Interestingly enough, I scanned a card from 2001-02 Topps Heritage in the same scan I did for this Don Simmons card, which uses the 58-59 design, so even though I don't have any, I do have the design of 58-59 right in front of my face!

It turned out to be my first card of Don Simmons too, he doesn't have many as many 60s players don't.

In this time period, O-Pee-Chee actually produced the cards for Topps. This is only my 17th card issued during the Original 6 era, not counting the one or ones waiting for me in Washington. (I don't remember if it's just that one or more than one, like I said, it's been more than a year since I actually bought it.). I'm actually surprised it's that many,

Posted by Billy Kingsley at 4:18 PM