You may remember a while back I decided to rescan my entire NASCAR collection, since the original scans I made were subpar, and not really usable. I didn't have the right tools or the knowledge I have now when I did them, that I have now.

Well, I hadn't really worked much on them and I needed to change that, so I decided when this season started I would work on NASCAR cards exclusively when I was watching the races on the weekend. Give or take a month into the season, and I'm making some real progress: 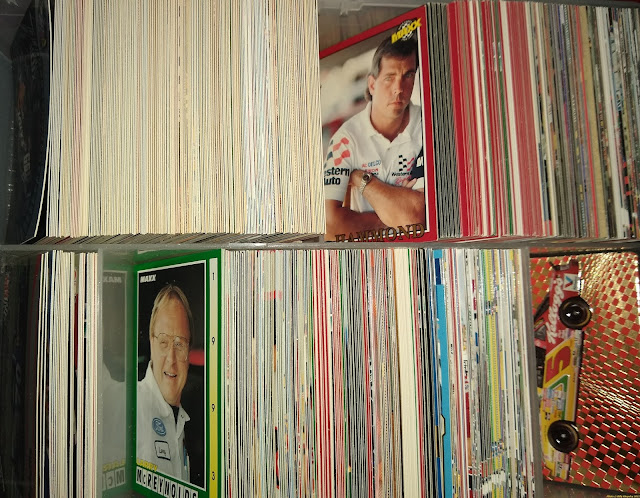 When I started, this entire case was full. It's a Jammers 1100 card plastic box, which is what I have my "waiting to be rescanned" NASCAR collection in, or I should say much of it...there's also two 5000 count boxes. While it may not look like it's a whole lot of progress, trust me, it's about 400 to 500 cards I've done since February, because I haven't just been pulling from this box.

When I started this in February, I didn't have a single card scanned for 1992 Maxx or more importantly, 1991 Maxx, one of my favorite sets ever. 1992 Maxx, with the red border, was the first NASCAR set I ever had completed, at 300 cards, when I got a factory set in mid-1993. No 1991 Maxx appear in this photo, I already pulled out the ones from this box and scanned them, I think. Might be a few stragglers. but I don't see any of the telltale black borders showing.

I still have a long way to go, this isn't a project that will be completed in 2021, but I wanted to post about it now.

Posted by Billy Kingsley at 1:18 PM

Email ThisBlogThis!Share to TwitterShare to FacebookShare to Pinterest
Labels: NASCAR