X is such a rare letter for people's names. There has never been a player in the history of either the NBA, NHL or NASCAR who's last name started with X. In fact, my records show that I have 15,283 different people in my collection...but only 3 of those people start with the letter X.

So, when I was digging around on the Trading Card Database and discovered there is a young hockey player in the OHL who is named Arber Xhekaj, the very first thing I did was head to Ebay to see if I could nab one of his cards for my collection...and I did! Not only did I get his card, I got the entire 2019-20 Kitchener Rangers team set. I figured why not, right? It was not very expensive and every single person in the set was a new name not yet present in my collection. 22 new people is always a good thing.

The part that is mysterious...I have no idea how his name is pronounced! I'm hoping Douglas from Sportscards from the Dollar Store sees this and can shed some insight because the Kitchener Rangers are his team.

I really hope he makes it to the NHL some day. I don't know if he plans to pursue hockey as a career, or if he has the ability to climb the ranks. But I hope so...he could become my all-time "letter leader" for X with just one more card. (he does have other Junior league cards so he very well may even if he never gets to the NHL)

Letter Leaders is a concept that once mattered a great deal to me, but has been lost. When my original Excel chart corrupted circa 2005 I lost that, and for most letters, I have no idea who leads it with the most cards. I know I could use the Database's statistics, but they include a lot of cards that don't count to me...so it would not be near accurate. Back then I only had that info for the NBA, but now I could keep it in three sports, plus non-sports, and overall. For instance I know that Michael Jordan is the Letter Leader for J, both for basketball and overall. Henrik Lundqvist is the L Letter Leader for hockey, but not overall, I suspect that's Bobby Labonte...but like so many things, I won't know until I finish scanning everything. 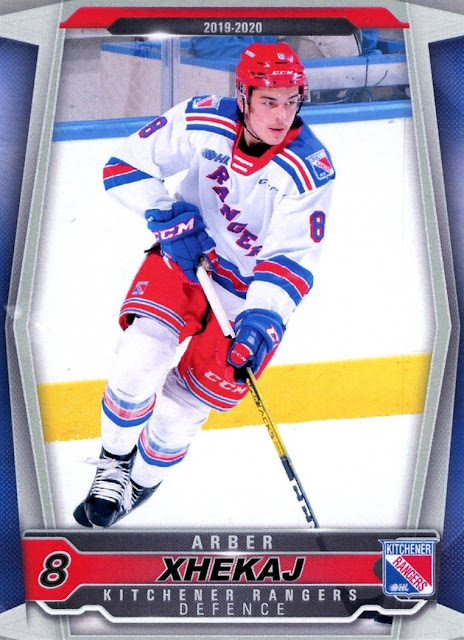 Although the Kitchener Rangers very clearly take their design from the New York Rangers, I'm not sure if there is any actual connection between them.