Seriously, that's what Seattle Kraken fans are already calling themselves! The arena, formerly the Key Arena, home of the SuperSonics and Storm, has already been dubbed the Krak House. (not officially, it has some stupid name I can't remember) Not sure they thought the team name all the way through there....I was rooting for Sockeye! Mostly because I was imagining a giant fish mascot. (OK, so the Kraken's likely squid-like creature will probably be pretty cool, too).

All that aside, the Seattle Kraken did something today that's never happened before in my entire 33 year history of collecting sports cards. They got a card into my collection before the team actually existed! While it's not the first time a team has gotten cards before it actually played, even in the sports I collect, it's the first time I've had it happen. Both the Toronto Raptors and Vancouver Grizzlies got cards before they played, but I didn't take up the NBA until February 1996, 4 months after their first games. Even though I started collecting hockey with the Golden Knights' introduction, they didn't get cards before they played, I got my first in December of 2017.

I had mentioned to my mom that I wanted the Seattle Kraken card from the 2019-20 Upper Deck Game Dated Moments set, but I didn't want to pay the price asked for it on ebay. She went and got it for me! 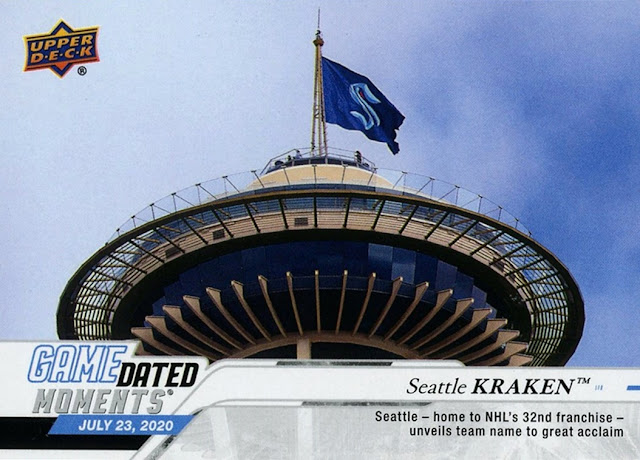 Here's the back, just because: 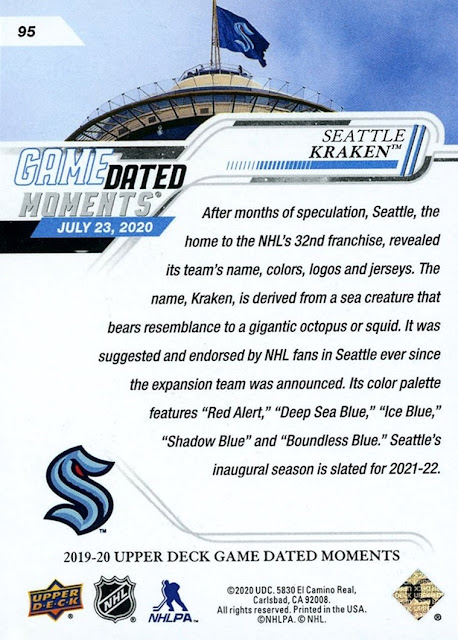 I can't wait until they come into the league. It's a tough time for them, for sure, but there's nothing as exciting as an expansion team. Frankly, I hope we see some more over the coming years.
Only a few months now until we find out who will be the Inaugural Kraken.
On a different topic, I had to go to the doctor today, which is one of the worst possible things I can ever imagine having to do. It was made a lot better by the fact that I saw a 60s El Camino on the way. First time I've seen a 60s El Camino, and only the 2nd El Camino, I've seen since the Pandemic started. Also first 40s car I've seen since 2019...so it turned out to be a very good day.

Posted by Billy Kingsley at 1:32 PM