In Memorial of Bill Russell

Yesterday, Bill Russell passed away at age 88. Bill Russell's accomplishments in life and on the basketball court are numerous and legendary. There's nothing I can say that hasn't been well covered elsewhere, but I have long held that he was the greatest of all time.

Since this is a card blog, I thought I would pay tribute to Mr. Russell by sharing 11 cards of his, to match his career number of championships, which is the all time record in NBA history. 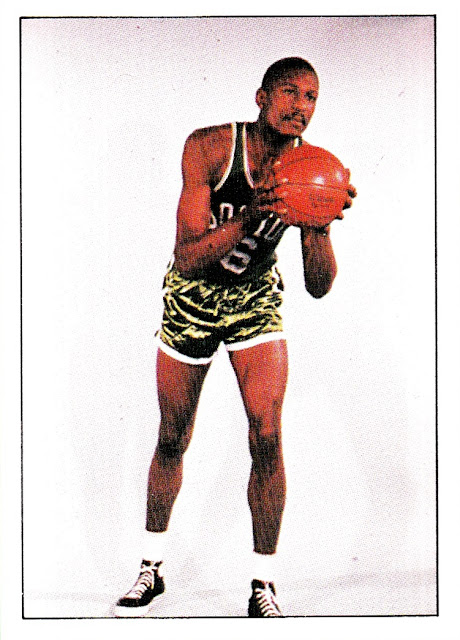 Probably my favorite card of him, being guarded by the other greatest of all time, Wilt Chamberlain. This card is available in 6 versions, and I now have most of them. 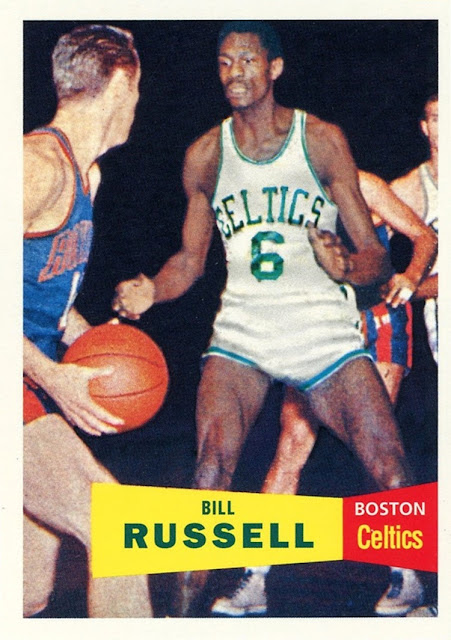 From the Topps Stars set in 1996-97, they reproduced the first Topps or Star cards for the NBA's 50 Greatest Players, and this is that card. 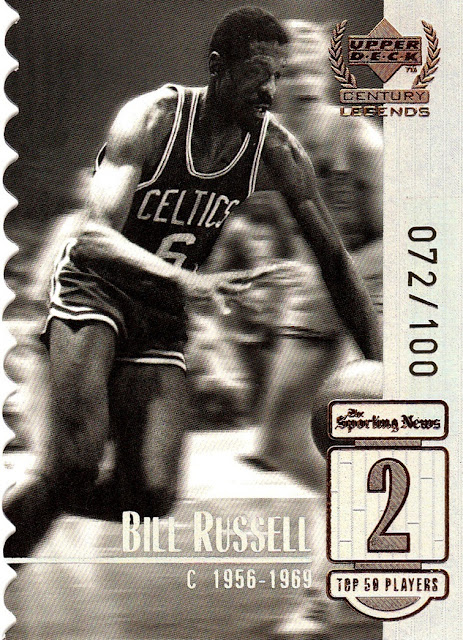 My only numbered card of him, which I pulled from a pack myself. 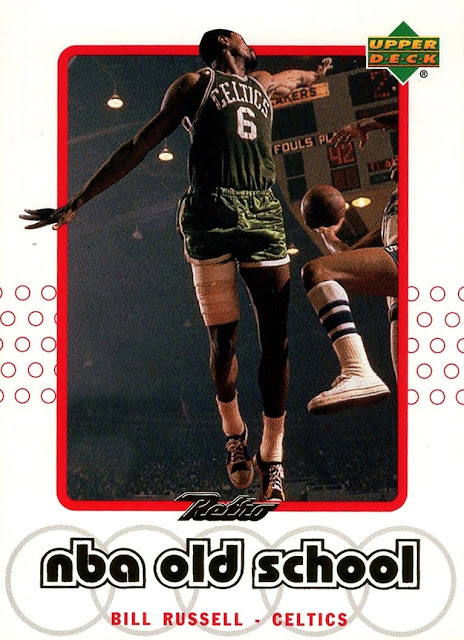 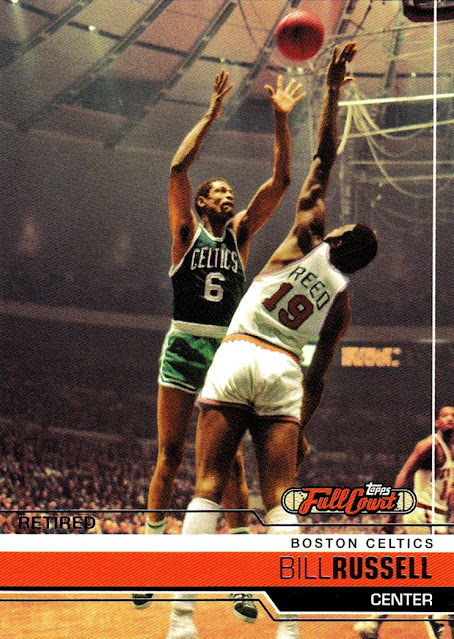 An awesome photo from 2006-07 Topps Full Court, this was taken during his final season, the first year in the current Madison Square Garden. 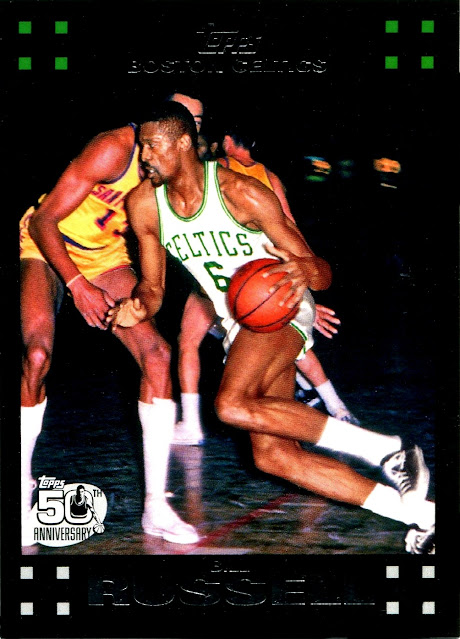 To celebrate the 50th Anniversary of Topps basketball cards in 2007-08, some legendary retired players were placed in the base set. He is so important to the sport that he even got his card to be #6. 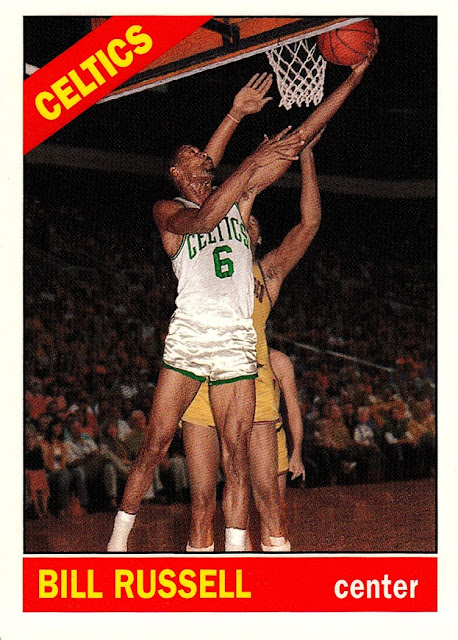 Also in the 2007-08 Topps set they did an insert called "Bill Russell: The Missing Years" producing cards for him in the baseball designs for the years Topps didn't produce an NBA set. I always wished they would do a full Archives release for the NBA filling in their missing years, maybe they will do that when they get the sport back in a couple of years. 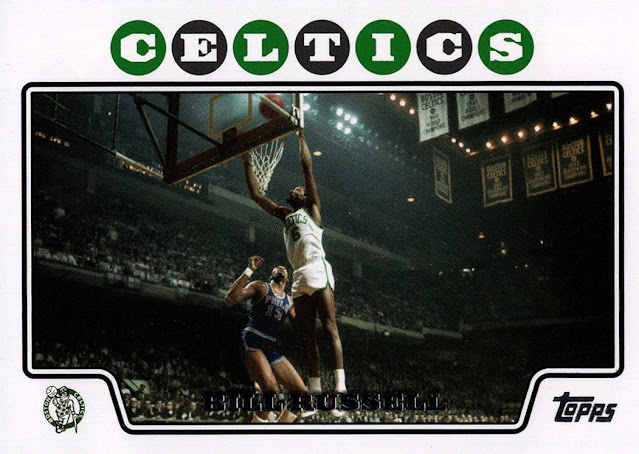 He also got into the 2008-09 Topps set with another great photo of him being guarded by Wilt Chamberlain. The two greatest of all time. 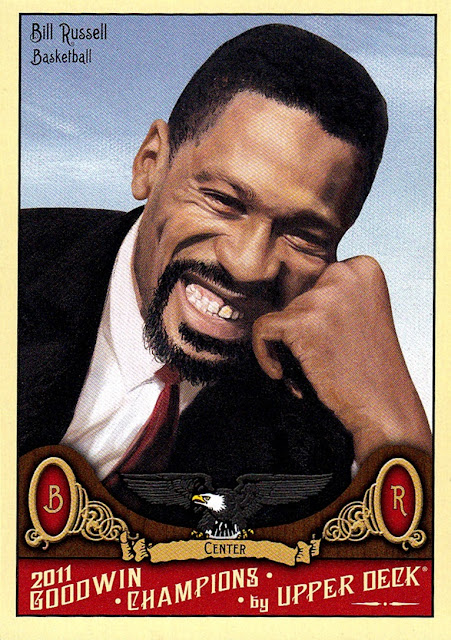 From Goodwin Champions, just a neat card showing the legendary smile that was a famous sight in it's own right.
Unfortunately I don't have a single card showing the very famous image of him with one Championship ring on each finger and the 11th on a necklace, it's probably the most iconic basketball related photo that wasn't taken on a court ever.
As noted Bill Russell was 88 years old.

Posted by Billy Kingsley at 6:51 AM