It was 10 years ago today that I began my project of scanning every trading card in my collection.

My hobby was VERY different in April 2009. I was, at that time, collecting only NASCAR. I had drifted away from non-sports a decade earlier, and I had left the NBA at the end of 2006, which, I thought at that time, was permanent. I now regret that immensely.

My hobby was also pretty solitary. I had not yet discovered the Trading Card Database, though it did exist then. I was a member of Trader Retreat but my activity was way down. (a forum I miss, had good times on there). I had not yet found NUTS, that would be a few months later. (sometime in August 2009)

I had zero idea what a blog was, even less so that there was already a vibrant card blogosphere. I would not discover that until I found the Trading Card Database.

Things were going to change drastically for me soon...I got back into Non-Sports in a big way in September 2010, I found the Database in August of 2011 but found I could track my collection there in October 2012 (I used it for checklists only before then) Entering my collection on there got me fully back into the NBA, after I had begun watching regularly again in 2011, and eventually, in 2014, the Database spurred on the creation of Cardboard History, and then in 2016, got me into hockey, which has since taken over my life.

But one thing began that day, ten years ago, that would become the thing I spent most of my life on for the next 10 years, and counting. Scanning my cards! In 2009, I had sorted out my NASCAR card collection from set to by person, and entered what I had of each person into an Excel chart, which I have discussed many times in the past. Well, my scanner, ever present on my table next to my computer, was of course right there so I thought to myself, "I wonder how scanning cards would work?" It worked well, and this was the first card I ever scanned: 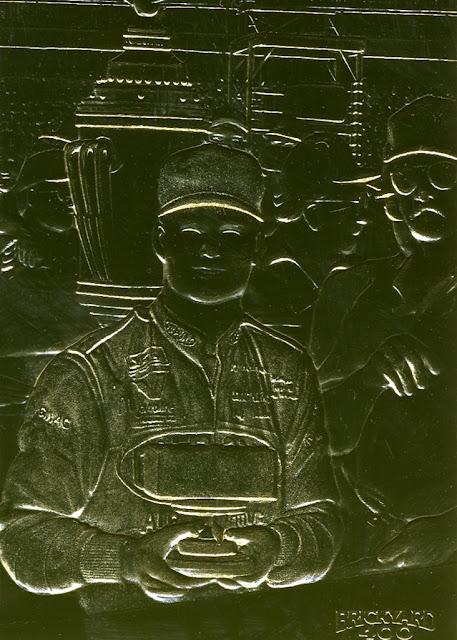 This is the factory set special insert in the 1995 Hi-Tech 1994 Brickyard 400 set, which is embossed gold foil on both sides. Since it scanned pretty well, I decided that I would do everything else! The only way I know now what day that was, is because I instantly created an album for my card collection- at that time, one album for everything- and uploaded it on my website. Luckily, my website, which I've maintained since 2004, automatically provides the upload date of each image (and for photos, the date taken as well, if you have the camera settings correct)  At that time, I was doing only card fronts, and I did not always do a very good job, a combination of it being "close enough" to the fact that I had not yet discovered PhotoScape, which means I couldn't properly fix each scan. Since I was doing the fronts only, and since I was not putting much effort into them, I got the fronts done by early 2010, but I did such a poor job that I've been debating just starting over from scratch with them, holding off mostly because I did them on my original scanner, which was the highest quality. Since I got a new scanner, perhaps of even higher quality, in February, I may end up rescanning them instead of trying to fix my crappy early scans. I am going to work on what does not have any scans first.

And that's what the contest is about. I'm well past halfway on the scanning...I would say at least 3/4ths, maybe further, along. Keeping in mind that I originally estimated that I would finish scanning everything in 2016, and that obviously didn't happen, my current estimation is that I will finish in 2021.

Here's the contest: Guess what day I will finish scanning everything, and be "caught up" for the first time ever. Guess a specific day, and just for fun (not part of the contest, will not increase your chances of winning) guess what topic the card that ends up last is. (basically, which sport, or do you think it will be non-sport, or multi-sport or...? I have a little bit of everything left needing scans, from vintage to modern). The Caught Up Date that determines the contest winner PROBABLY doesn't reflect the NASCAR cards that I did the fronts poorly on. If I do everything else, and finish my "To-be-Scanned" boxes, that will count as the end of the project. If I get on a NASCAR and Non-Sports kick (they need to have the backs done as well) and do them BEFORE I finish my To-be-scanned boxes, then it WILL impact when I finish because the time spent on them will take away time from working on the To-Be-Sorted boxes that the contest is based on. While I'm always working on "something" with cards, I have the attention span of a squirrel so who knows what I will work on when? Even I don't know.

Whoever comes the closest, by number of days away (either direction) will win...something. I don't know what yet. I'll tailor it to whoever wins. You can feel free to promote it if you want to, but it's not going to help your chances of winning, it's one entry per person, whoever gets closest wins, end of story. (I maintain the right to disqualify anyone for any reason, but I don't forsee having to do that)

Now, like some of my other contests, this is a long-running contest. I guarantee you this won't come to fruition in 2019. I can almost guarantee it won't be 2020 either, but I can't guarantee it fully, so if you want to risk it, go ahead. I mean, if I really get going, and my health doesn't act up, I can scan 300 cards in a day. It's rare, but not unheard of.

Any cards that arrive to me- either by trade, gift or I go out and purchase them, are going to be mixed into the stash so even I cannot predict what/when it will truly be yet...and since I predicted 2016 originally, my predictions are maybe not the most reliable anyway, lol.
Posted by Billy Kingsley at 12:00 PM