Reexaminating the 1989-90 Hoops set on it's 30th Anniversary

The 1989-90 Hoops set turns thirty this year! While that may not seem like a big deal, it was. This set was truly revolutionary and has more than a few firsts to it's name. 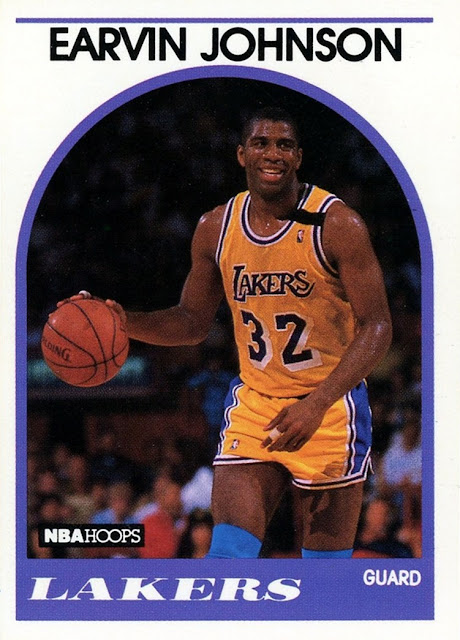 Before this set was released, ALL NBA sets were issued in one single series, with the majority of them being 132 cards, although not all. If a player was traded (free agency was not common at that time, although it did exist) you had to wait until the next season to get a card of him- IF he was one of the 131 chosen to appear in each set. (with the 132nd card being a checklist) With this set, which ran 353 cards, almost every player in the league was able to get on a card, for the first time ever. 381 players suited up in an NBA game in 1989-90, so it wasn't all-inclusive, but it was better than it had ever been before. The previous largest set was 1975-76 Topps, which was 330 cards. However, that set covered two leagues- the NBA and the ABA, which was in it's final season. Most of the missing players are rookies, who for some reason were not given cards in series 2, except David Robinson who was in a unique situation. 81 players played their first game in 1989-90. More than 20 of them never got an NBA card. I do not know if it was a contractual reason, or just a lack of usable photos- most of the traded players are in posed shots like the one below, although the expansion players- the Timberwolves and Magic both debuted in 1989-90- have action photos. Either way, it's a missed opportunity and a lot of players who never got a card probably would have if rookies were included.

With the second set, you had players getting an updated base card in the same set for the first time ever. 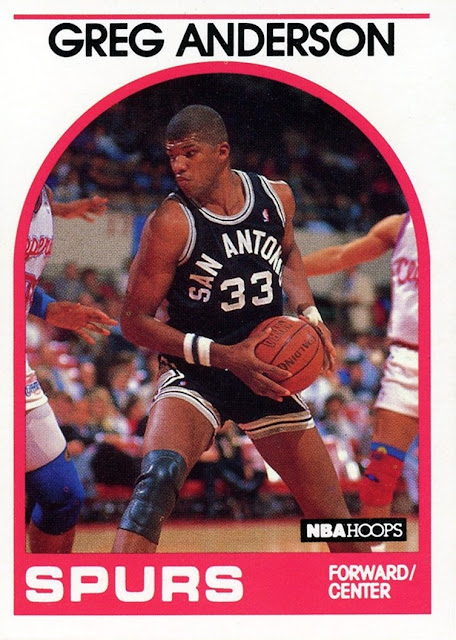 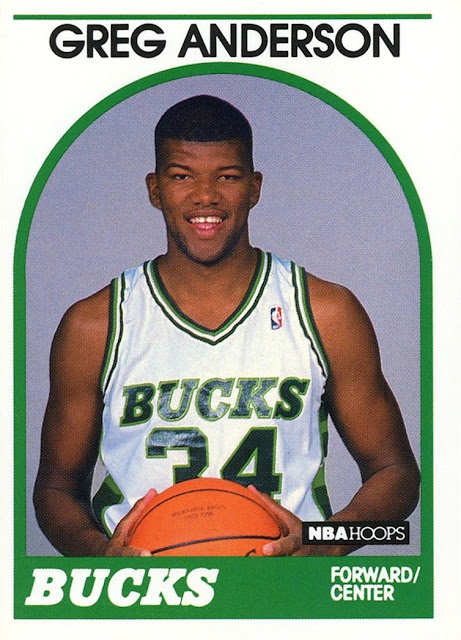 Cadillac Anderson got card #7 with the Spurs, and card #342 after his trade to the Bucks.

The card backs were revolutionary in their own right. 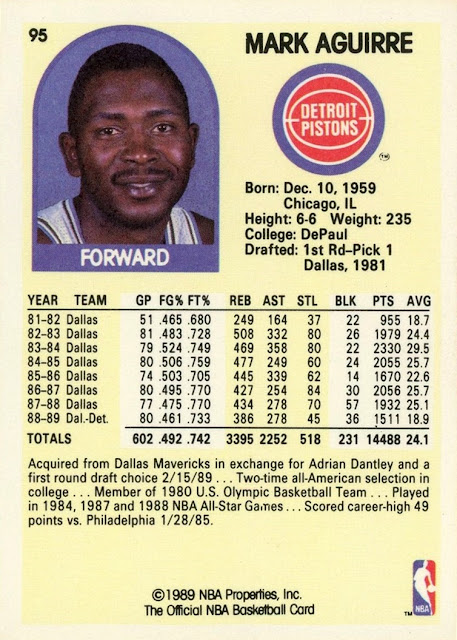 Design wise, I've never been a big fan of the light yellow on white theme they chose, despite yellow being my second favorite color- they just tend to blur together, especially on a card that isn't as darkly printed. Every player got full season stats and a bio, but the big deal was the photo of the player and the team logo. Team logos had appeared on card backs before, but never in full color. A photo of the player on the card back was a totally new concept. It has become the norm, now, But in 1989? That was unheard of!

This was the first set to ever includes coaches in the regular set. Star had issued a small coach set in the 1984-85 season, but it did not include every team and coach, and it wasn't numbered with or issued as part of the base set. With this set, not only did each coach get a card, they were inserted into the packs just like any other card, and every team's coach was represented...there were even coach updates in the second series! Coaches would be included in Hoops from this set until 1996-97, and one more time in 2012-13. They are a glaring omission from the NBA card landscape currently. 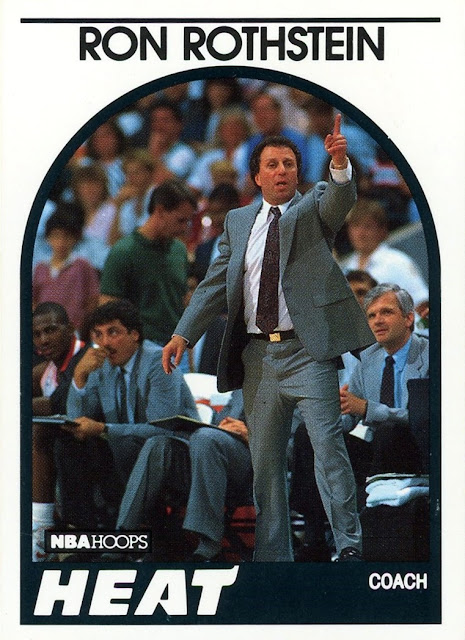 This set was the first to ever have promo cards, at least for the NBA. There were two. The 100 card Hoops 100 Superstars set was a boxed set available through catalogs- I've heard the Sears catalog but I do not have confirmation on that. The cards use the same basic design, but the border on the front is bright yellow instead of white, and the backs tend to be lighter printed. The card numbers change but the backs are otherwise the same as the base cards. Fun fact: The first time I saw one of these cards, I had been collecting the NBA for only a few weeks at that point. I thought at first somebody had taken a highlighter to the border of the Scottie Pippen card I had, until I got his regular base card and discovered it was a different number!
The second promo they issued is a significantly rare set...so rare that it took me more than 20 years to hunt down even a single example. The Hoops Announcers set was only available from the announcers themselves. When people talk about rare 80s cards, they usually bring up the Star Jordans, or the Fleer 3rd year Jordan that most people incorrectly call his rookie card. But those aren't rare. They are just expensive. The Hoops Announcers cards are truly rare. They did them in the same format in the 1990-91 season, and they are just as tough. I've never been able to get one, nor have I ever even seen one in person. 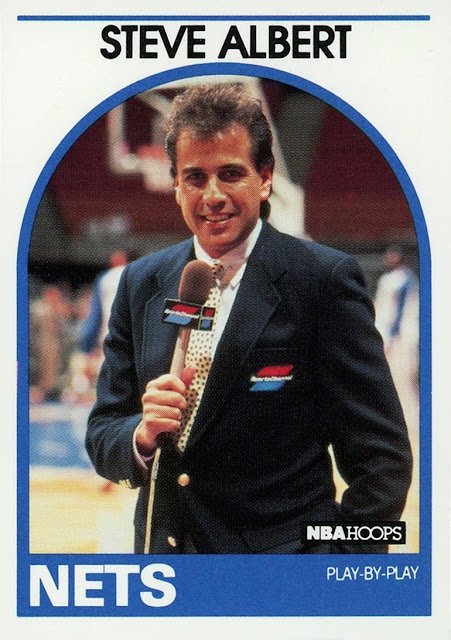 The backs of the announcers cards are not using the same design. It's just blue text on a white field.

Planned variations are the bane of modern collecting...even worse than exclusive licenses. The very first one, ever, comes from this set. Card #353, the Detroit Pistons Champions card, is the final card in the set. It appears in two versions, the Pistons Logo on a silver backdrop with 1989 World Champions text, and a version showing the players holding the trophy. The player version is actually the rarer of the two.
If my memory is correct, the photo version was short printed in Series 1, while the logo version was double printed in series 2. I know that I got the logo version shortly after I began collecting the NBA, but I didn't get the photo version until much later. I consider them both necessary to have a complete set. 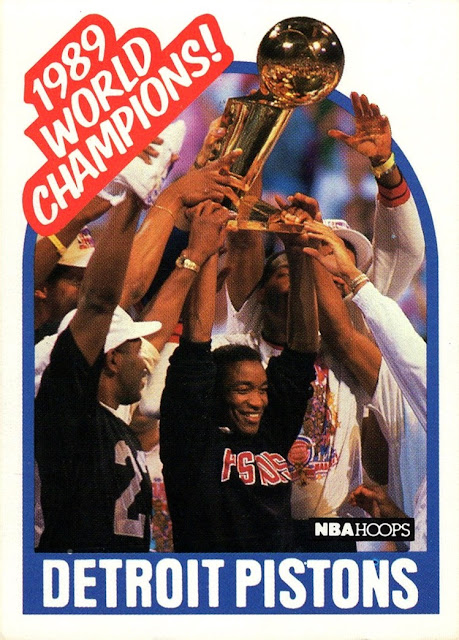 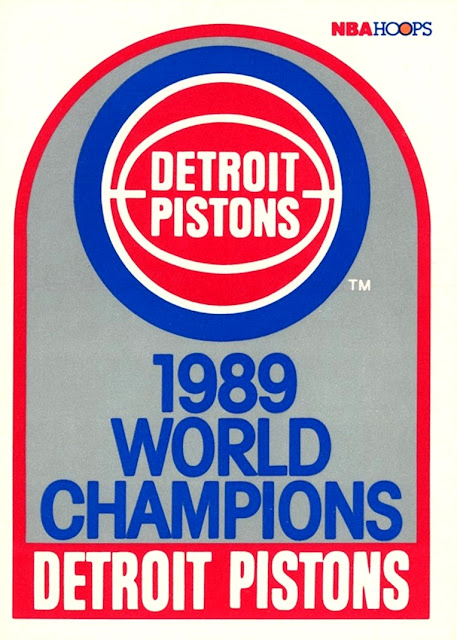 This is the first set to ever issue a correction for an error card. That generally only works if there are more than one series, and it happened here. There are six cards that exist in both Error and Corrected versions, most of them are minute and barely noticeable. I didn't know they existed until I was entering my collection on the Database, and then, after I knew what to look for, I discovered I had at least one of them residing in my duplicates box!
I don't have any of them fully scanned, but here's an error. Can you spot it? 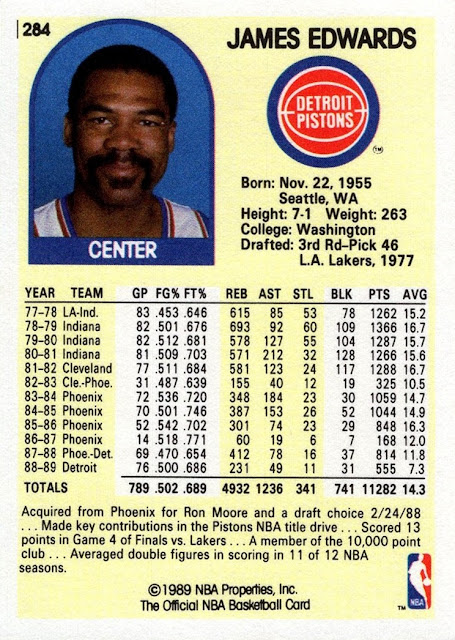 It's that little black like to the left of the card number. They issued a corrected version in series 2 that removed the line. That's it. There's one error with the wrong signed on date in the caption, another where the coach's birthday is wrong and one where they forgot to include the NBA logo! You can see a detailed description of all the errors, and see scans of them, here: Errors and Corrections

The Hoops brand has been around for 30 years now...how can that be, especially in these days of exclusive licenses? The brand is actually owned by the NBA. This first set was actually produced by the NBA. Later sets would be under the Skybox family, which was absorbed by Fleer. Upper Deck produced the brand after they bought the remains of Fleer, and then, after 5 years with no Hoops sets, it returned under the Panini aegis and has been the flagship of the sport since 2011-12. (I actually have a theory that Pro Set may have actually printed the 1990-91 set, due to the cards' texture and very slight oversized nature. But, that's just a theory I have, with no real proof.)

This is a very common set, that most people probably overlook at this point in time. Despite the fact that it's a common set, it's not that easy to complete. Some of the cards are short printed, and can be a challenge to find. The David Robinson cards (he has two, one from each series) are some of the most popular cards in their entire Hoops brand history. If you choose to buy the set, you can probably get the whole thing for the cost of a blaster and a half, or less. I preferred to do it the hard way, although to me, much more fun way. I built the entire set via repacks and trading, and a couple of sealed packs, which you could still find easily in 1996 when I began collecting the NBA. You can probably still find them with a little looking, although, as I have completed the set, I don't need to look anymore. However, it did take me almost 20 years to complete, and there are several cards I need to upgrade as well.

There is a printed paper checklist that you could get by writing to an address on the packs. This is very, very rare. Most people, myself included, have never seen one.

The 1989-90 Hoops set is also the first NBA set I've ever seen an advertisement for. However, I know there were magazines for the hobby that predate Beckett, I don't have any and don't know if they included ads. I have seen an older ad, for the 1988 Maxx NASCAR set, so I know it's not the first ever in the hobby. 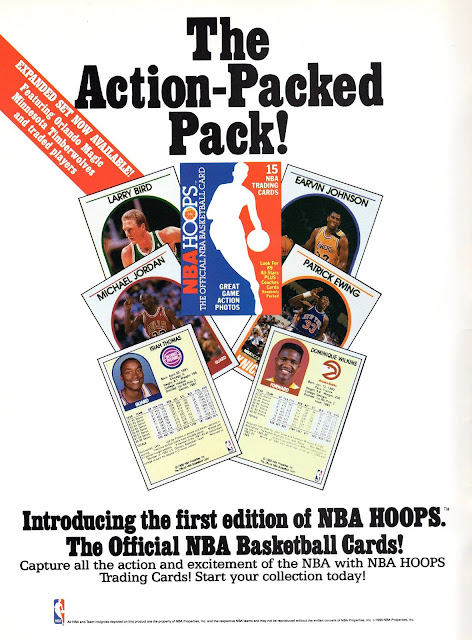 30 years on, and the Hoops brand is nearly ubiquitous for the NBA. There have been more cards issued under the Hoops name than any other in the entire history of the sport.  There seems to be no signs of that slowing down, as Panini still continues to produce a Hoops set every year. I hope that somebody always will.
Posted by Billy Kingsley at 4:50 PM