A couple odds and ends

I'm not working on cards at the moment. After doing so every day for years, I got burned out in 2019, as I've discussed a lot. Well, I was starting to feel the same burnout setting in (probably made worse by everything going on) and I mentioned to my brother that I wanted to work on my comics, but couldn't get to them myself. The very next night he fixed it so I could get to them, and I've been working on my comic project since. This is a two-stage project, the goal is to scan the covers of every comic in my collection, which you can my see progress here, and also to read my entire collection. I have more than 500 comics I've never read, many of them given to me. I have been in the hobby since he read me my first comic at 5 days old, but I have not seen my collection since 2002. I was in the middle of sorting my collection when my dad went into the hospital...not knowing at the time that he wouldn't be coming home...so they got put away, and have been untouched since then.

I've been wanting to do the scanning and reading project since at least 2015, and I'm now doing it, although I have not gotten to the books I have not read yet- they are deeper in. Most of what I've been scanning now are the Star Wars comics. But eventually I will get them all...and read them all as well! 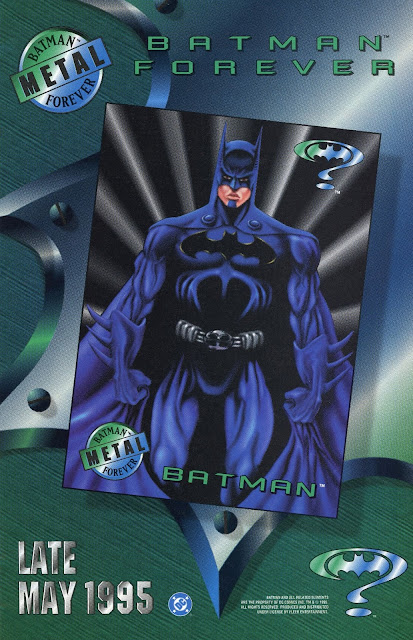 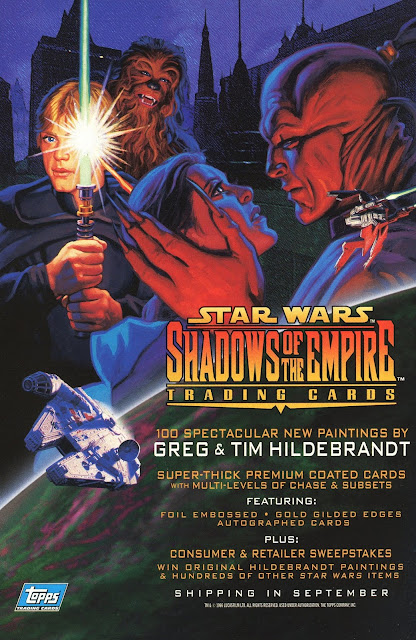 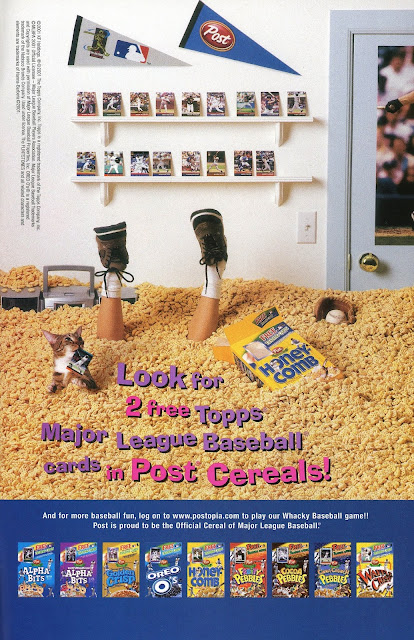 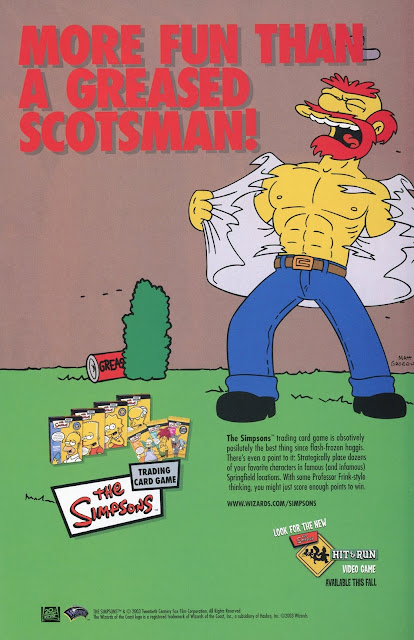 A Simpsons gaming set that wasn't even listed on the Database... 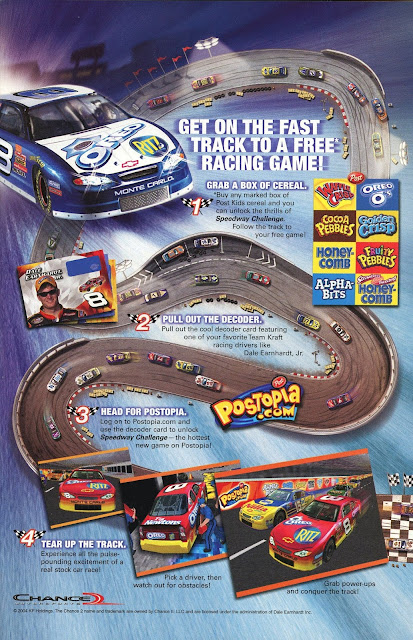 I've been posting the ads to the Trading Card Database's Ads section, except the Batman Forever Metal which somebody else had posted previously. They will appear in their respective topics' ad section on the Cardboard History later today or tomorrow.

I actually have a little-used comic blog which is probably going to get more attention for a while. If you like comics, you can click here and follow along: My Comic Book History

It's interesting, to me, that for the cards, it takes the most time to edit them, but for scanning comics, it's actually the scanning process itself that takes longest.

Granted, I'm still in the letter C as I type this, but each letter has hundreds of people. B had 377 people to upload. B is surprisingly the largest letter, but maybe it shouldn't be too much a surprise since it was the first letter to hit 1000 people scanned overall.

I realized that I never wrote a post for the last adventure my brother and I took before everything shut down. I will try and get to that at some point soon. It was 1 month ago today, March 1st.

I worked on models for the first time in 2020, and it was disastrous. I painted 3 bodies, two of which are unbuildable, and even more concerning is the smell of the paint gave me a bad headache, which is unusual, and I even had both windows open. That's something I need to keep an eye on. It was a pretty disheartening day overall and I went back to comics before the sun went down.

I feel kind of trapped by this whole coronavirus thing. I'm used to living like this, but it's taking a toll on me mentally anyway. I think it's because, even though yeah I can't really do a whole lot of stuff, I at least had things to look forward to before. Now I don't. Car shows as late as September are already cancelled. I don't know how long this is going to last, but I hope it's not too long. Famous people are starting to die from it, maybe that will make people take it more seriously. And yes, I know that it seems trivial to complain about car shows being cancelled when people are dying, but for me, it's the main reason for living. Ironically, I've noticed that I'm losing weight due to this. I have basically stopped eating fried foods, which was, honestly, my favorites. And I've noticed that I have to pull my pants up more often.

It's funny...not "hah hah" funny, but "peculiar" funny...none of the stuff I'm doing has a time stamp on it...nothing needs to be done at any specific time...yet I still feel like I'm trailing so far behind, like I'll never catch up. For instance, I have magazines in my "waiting to be read" stack still in their factory seal from 2017. I know I've got a box in my storage unit labeled "To be Read 2007" waiting for me. 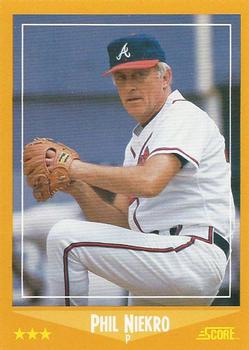 This card was recently brought to my attention. Pretty cool that somebody who looks like he could be a grandfather could still be playing. That makes me wonder, was he the oldest player in baseball?Vince Carter, he's the oldest player in the NBA, and he set the record this season for longest career in history...22 years. What gets me is that I remember when he was drafted...

Either'd have a long way to go before he catches the longest sports career ever though, and that belongs to Hershel McGriff, who competed from 1950 to 2018! Although he did retire a couple times, he found it boring and came out of retirement at age 81. His last race was at 90 years old. 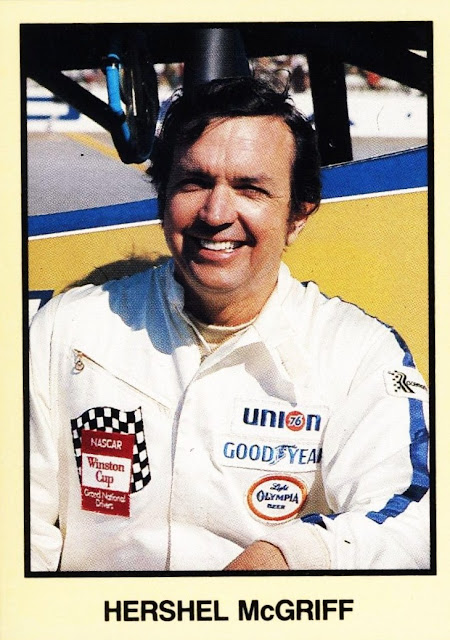 This photo of him dates to 1974, although the card is from 1991. He actually drove from his home in Oregon all the way to Darlington, South Carolina, in 1950, ran the race, then drove the race car back home! Things were very different in those days.

Panini actually got Hershel to sign cards for them in 2018. I really want to find one of them. He is one of only two drivers who were in the first Southern 500 (the first 500 mile race in NASCAR history) to have a certified autograph issue, the other being Cotton Owens. (Technically, Lee Petty has one as well, but it's a cut auto SN to 5 copies and also features Richard. I'll likely never even see one, and he didn't sign an actual card. But it is out there.). I believe Hershel may be the last driver living from that legendary race, but some of the drivers are not well known and their whereabouts and status are unknown.

I appreciate the fact that you all respected my wishes and have not sent me cards during this time. With my health problems I don't want to, no, I can't take any risks. Having two of the major risk factors for this virus makes me skittish. And even though you may have taken precautions, who knows who's been caughing on the mail along the way? I never though I'd ever post a thank you for NOT sending me cards, but this is a crazy time we're living in.