Perhaps the most steady franchise in sports history, the Boston Celtics have worn essentially the same design for more than 80 years! 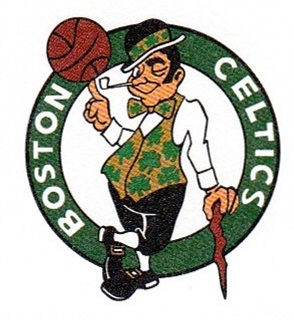 History: The current Celtics franchise was founded in 1946, and is one of three remaining teams that were part of the first season of what would become the NBA, along with the New York Knicks and Golden State Warriors, then located in Philadelphia. The uniforms the Celtics wear, however, are much older. The early days of basketball saw many professional leagues come and go, and also a profusion of barnstorming teams, that would travel the country playing whoever they could find to play them. (The spirit of barnstorming lives on with the Harlem Globetrotters). The first Boston Celtics, also known as the Original Celtics, were one of those barnstorming teams, first founded in 1918. Their history is quite convoluted, and I can't determine when the team folded, but it was before World War II. They wore the exact same uniforms the current Celtics did when they began. The first professional basketball card is of one of the Original Celtics, Joe Lapchik, in a multi-sport release called Sport Kings in 1933. I don't have it, so I can't show it.

The Celtics home whites have remained virtually unchanged in their entire NBA history. The construction of the jersey has changed over time, notably the width of the bands that go over the shoulder. The NBA logo has been added, then moved several times. There are far more ventilation holes than there were "back in the day", etc...but design wise...practically unchanged. The largest change, which doesn't even show on cards, is that from 2005-06 through 2013-14 there was a small shamrock over the player's name.

Actually, the largest change the home whites have ever had was having the player's last name added over the number, which occurred for both home and road jerseys for the 1972-73 season. But that's not a design change so much as a concept change.

So with all that said, you can see that the home whites are basically the same in 1957-58..
as they are in 2015-16!
The only real change is that the Celtics word has been slightly compressed, so it does not go from armhole to armhole.

The road greens have changed only slightly in the Celtics' long history.
Originally, they read Boston across the front in a wide arc.
The last year they said Boston was 1971-72, it was also the last year they did not carry the player's name on the back.  I'm not sure if this is an actual image or a composite- I have a suspicion they may have digitally created the background of this image. I don't have any cards issued in that time period to show the road green so I had to use this later one.

The wide Boston jerseys have been work as throwbacks several times, beginning with the 1996-97 50th Anniversary celebration.

The road greens then were modified in 1972-73 to say Celtics, and would be basically unchanged until 2013-14. Minor adjustments only- a shamrock was added to the "belt buckle" in 1999-00, and a shamrock was added over the player's name in 2005-06.
The road green was changed back to Boston for the 2014-15 season. It also saw the shamrock over the name removed as the NBA mandated that area as the location of the NBA logoman. This card shows the shamrock "belt buckle" well.

The Celtics have several alternate uniforms. The first and most used has black lettering and black stripes down the side. These were used so much when I was getting back into the NBA I actually though they were the new normal for a brief time. These debuted in 2005-06 and are still in use.
Another alternate has gold lettering. I really like these. They debuted in 2006-07.
They also have had sleeved alternates. The first, which I don't believe they wear anymore, were a combination of the first two alternates. This is the only card I know of to show these alternates.
Debuting in 2014-15, the sleeved jerseys are gray with white lettering. This marks the first time in the Celtics' long history that they wore any colors other than green and white.
The Celtics also have several jerseys that have not appeared on cards. The Celtics were the Nets' opponent in the 2012 Christmas Day game, which saw the Celtics wearing solid green jerseys with green lettering.  They also wore a special jersey for the opening game of the 2008-09 season, which was like the normal home whites, but had gold borders on the letters and numbers. Neither of those jerseys appear on cards to my knowledge.

Posted by Billy Kingsley at 5:31 PM