Buying "Christmas Cards" for others leads to presents...for me!

Earlier today I hit my favorite local shop in a mad-dash scramble to get my Blogger Secret Santa out in the mail. I cut it close this year, which was not something I wanted to do but had some unexpected medical expenses pop up...not something you ever want to have to deal with, and fixing it is going to be hanging over my head for a few months. I am not going to say who I got or what I got them, but I will say I was successful in more ways than one. But, since I plan to surprise the people I found stuff for, I'm not going to talk about that, either.

What I am going to talk about, however, is the great stuff I found for myself, but first, some USPS delivered surprises. 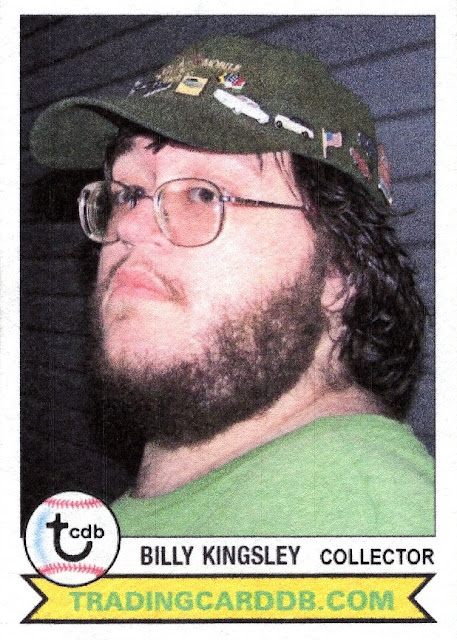 Hey look, it's me! Trading Card Database member C2 Cigars- who I met in September, the only member of my favorite website I've met in person- made up a set of cards for some of the regular contributors to the Database. This is actually my second card- I made up my own, which Gavin printed for me a few years ago. This is the only one where I took the photograph though. Even better, one of the members ever gave me a PID on there (Personal ID) which every athlete and non-sports person to have a card gets. How cool is that? Now I'm debating listing the card I had Gavin make up for me. Sure, it's a production run of 2, and I have both, but is it any different than a 1/1 that I pull from a pack? Hey, I licensed it, too! :) (Perhaps, if the proper paypalling was done, Gavin could be persuaded to print more of my card?)

Anyway, that was cool. Not totally a surprise because I knew it was coming, but I also got one of Capt.Kirk and C2 himself, plus the checklist.

I got a HUGE, heavy box from Database member bevans. I've traded with Brad a few times but I wasn't expecting anything this huge. It turned out to be some cards, which I have not even opened yet, but books...lots of books, about hockey! I didn't know the NHL published their own magazine. I do now! I'm going to read them all from cover to cover, but I may not get to them until next year. I'm currently reading the Anglo-Saxon Chronicles I got from the library, and since I have to give that back, I think I will finish that first. Also included is a copy of the OPC card stories book, which I've heard good things about, but hadn't actually seen before. I expect I will learn a lot from all these books.

Now, I sort of expected to buy some basketball cards for myself today, and I did. 27 of the Panini Player of the Day set, including some of the big names (Kevin Durant, Giannis Antetokounmpo, Kyrie Irving, etc) I also picked up an oddball perforated Michael Jordan card from 1991-92 Hoops. I have not IDed it yet, but it may be from the page issued at a Bulls game that year. I wasn't expecting to get any vintage hockey, but I did...I knew it would be there, it always is, but I said to myself "save the money, you have medical bills looming" and of course, I have no real willpower when it comes to not buying cards, and came home with this: 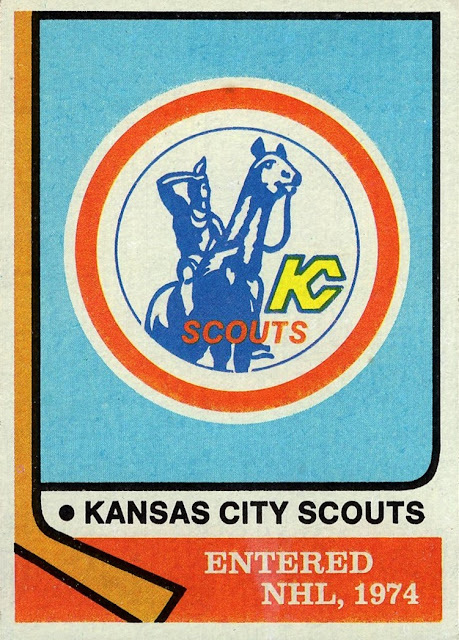 3 cards from 1974-75 Topps, including my first Kansas City Scouts card! The team failed miserably in Kansas, moved to Colorado, failed miserably there too, then moved to New Jersey, became the Devils, and are still there thriving. I had seen this card on The Shlabotnik Report blog and wanted a copy, and now I have one! I LOVE team logo cards. When it's my first card of a defunct team that is mostly forgotten? Even better! 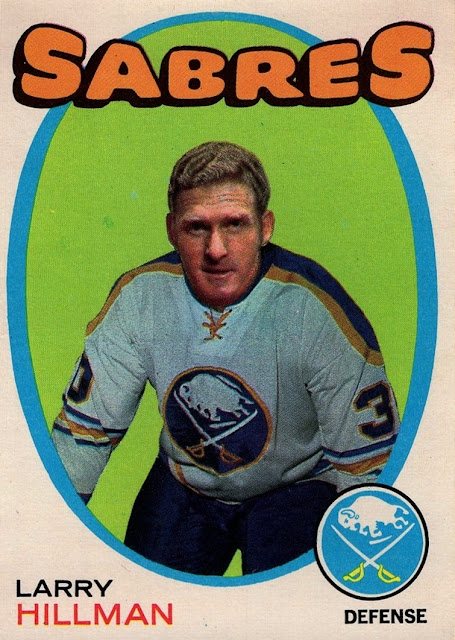 3 cards from 1971-72 O-Pee-Chee! I previously had one from the set. Two of the people, Hillman and Darryl Edestrand, are new to my collection. 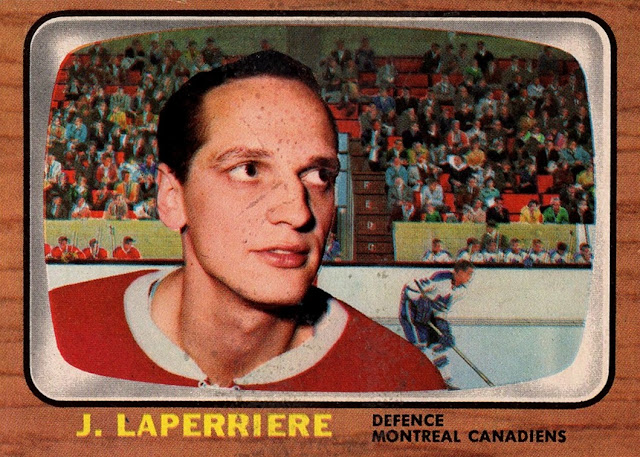 My first two cards from 1966-67 Topps! Both have issues- this card has some rather poorly placed wax damage on the front, and the other card, not pictured, (#38 Tom Williams) has some water damage. But, all 8 cards from the 60s and 70s combined cost me only $10! The 71-72 OPCs are pretty much perfect, too. The Jacques Laperriere shown was marked $5 in and of itself, so I am very happy.

It wasn't just vintage hockey, though... 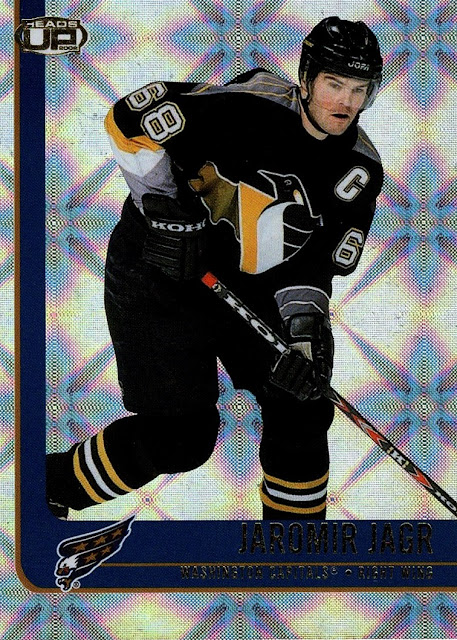 A huge stack of 2001-02 Heads Up, one of Pacific's brighter sets, the entire card is printed on holofoil starbursts. It looks really cool in hand. I added more than 25 of them to my collection!

I also added a complete set of 1989-90 Marine Midland New York Rangers cards, which, even though they are not all in great shape, become my first completed regional promo for the sport! I know there are new people to my collection in the cards, but not a single one was posted to the Trading Card Database, so getting them posted took precedence over figuring out how many are new to me. 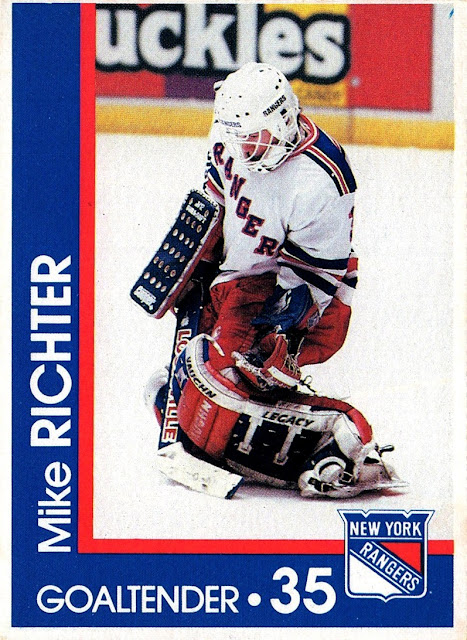 Not a new person. I used to love Chuckles candies when I was a kid...when these cards were new. Now, I wouldn't be able to eat them anymore even if they still made them. Not if I didn't want to...you know, die. 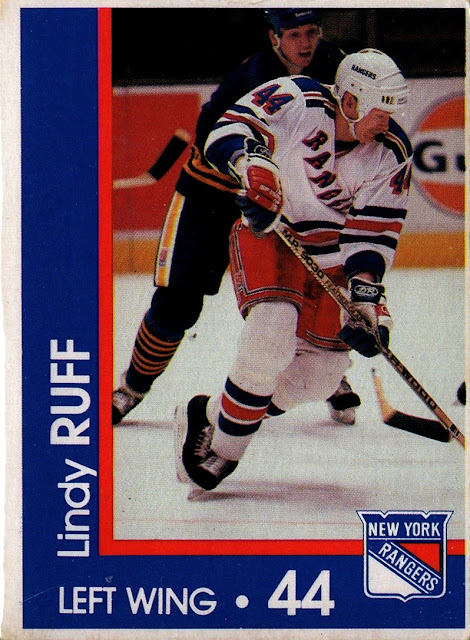 Lindy Ruff is definitely new to my collection. He's currently the top assistant coach for the team. 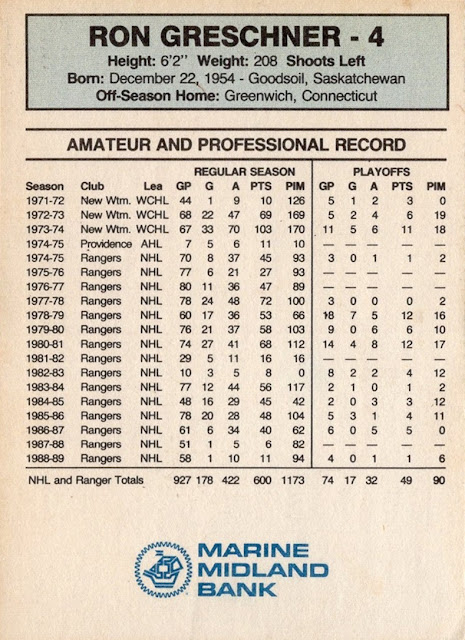 Card back gives full career stats. Each card is slightly oversized- big enough they will not fit in a standard penny sleeve, but they WILL fit in an oversize sleeve made for thick cards. Glad I had some on hand because some of the cards have something sticky on them- don't know what, but it looks like they were stuck to something like a book at one point. I don't normally store any of my cards in plastic but in this case I will make an exception.

I'm pretty sure back in the day, during the time these cards were issued, we had an account with the now long-gone Marine Midland bank. Don't recall ever being offered cards! They did sets for the Rangers, Knicks and Islanders...don't know if they did any others in other sports, but I would not be surprised.

Less than an hour now until the 100th classic outdoor game between the Senators and Canadiens. The Outdoor games are fun so I am looking forward to that...expected to be 3 degrees F out at the start of the game.

Posted by Billy Kingsley at 6:25 PM