I've had these cards for at least 15 years yet just noticed this.

February has been a very busy month of scanning for me. Not like I can do much of anything else- it's either closed or has been too wet. I ended up doing more than 2200 cards during the month, including finishing off the stack of 1993-94 Hoops I hadn't done before.

Among those were the Dennis Rodman cards from series 1 and 2, and when I scanned them on the 26th, I noticed that he was playing the Knicks in Madison Square Garden on both cards.

I wonder if that was a conscious decision, or just the best photos they had available? I guess I will never know, and in the grand scheme of things, it doesn't matter, but I found it interesting enough to get a post out of it. I do notice there are a high number of cards with photos taken in MSG.

The Pistons photo was taken during 1992-93, he was traded during the offseason to the Spurs, so that puts the photo taken squarely in the 1993-94 season, as most if not all of the Series 2 photos were. 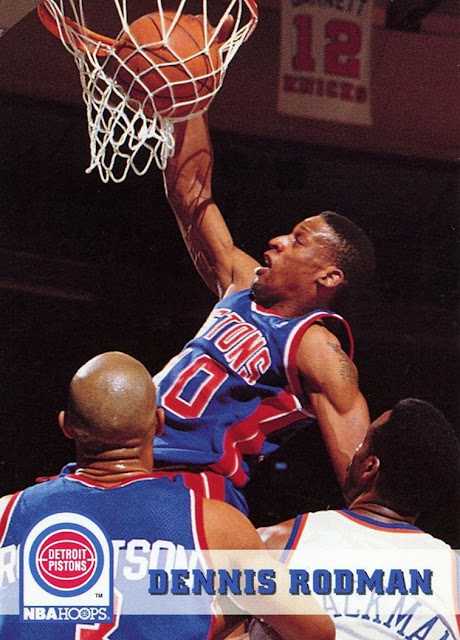 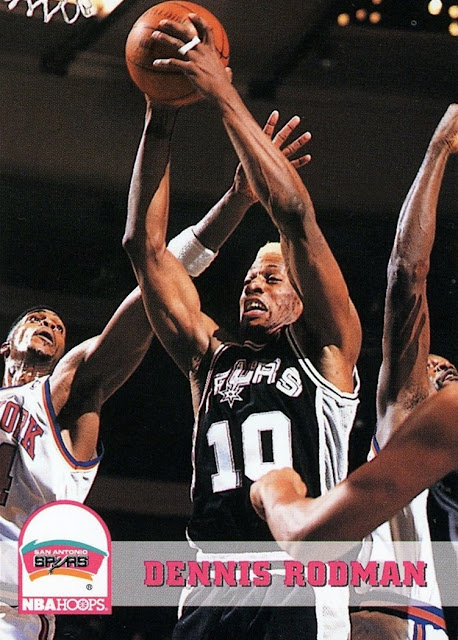 It would have been even cooler if Rolando Blackman had made it onto the Spurs card, too, but no such luck- Charles Smith on the left and Patrick Ewing on the right appear on the second card.

Dennis started coloring his hair partially in protest of being traded against his will, and that would go on to be what he was most known for.

Using the game logs on Basketball-Reference.info, I was able to discover that the Spurs photo was taken on January 19th, 1994, the only time the Spurs visited MSG that season. Dennis only scored 4 points, but grabbed 20 rebounds, his specialty. The Knicks prevailed 120-108. This is provided the Spurs didn't play the Knicks in the pre-season, those records are not kept. The Pistons and the Knicks play multiple times so there's no way to determine if it was the game played on December 12th, 1992 or April 17th, 1993, the two games the Pistons played in MSG that season. Dennis and Rolando played in both. You can really find a lot of useful information in the game logs. Wait, scratch that. I checked Alvin Robertson, and he only played in the April 1993 game, he was not in the December game. So, both of these have now been positively dated. I didn't expect to research that when I started writing this post, but that is cool.

Posted by Billy Kingsley at 1:41 PM