I wanted to do something special to mark my 25th Anniversary, but what? Then it hit me, how about highlighting some special paint schemes? Special Anniversary = Special Paint Schemes, It made sense! I originally conceived the idea as a weekly series, but soon realized that wouldn't work- since Press Pass never bothered to produce cards showing the cars, I would run out of cards to post before I reached the end of 2017, let alone get me through 2018. Then I thought about it some more, and realized, since it's a 25th Anniversary special series, I could do 25 posts- one per month in every month of 2017 and 2018, and a bonus post to be published on the actual 25th anniversary day. Now that...that was doable.

I knew to begin the series I would use Dale Earnhardt's 1995 Silver Select car, or at least that's what Action called it. Most sources, including NASCAR itself, call this the very first special paint scheme. But, it's not. Not by a longshot. It's not even the first Dale Earnhardt himself ran.

The first special paint scheme in NASCAR history was run in 1968, by David Pearson. The Holman-Moody Fords he usually drove were blue with a gold roof, but for at least 5 races in 1968, he drove a gold car with a blue roof, to celebrate Ford Motor Company's 65th anniversary. There are no cards of this car or most of the cars that predate the silver car shown in this post.

Dale himself drove the second and third special paint schemes in NASCAR history. He ran a reverse paint scheme at the 1985 Daytona 500, and in the 1986 Daytona 500, he ran with "Red Headed Stranger" on the hood and Farm Aid on the tail panel.

The fourth special paint scheme was run by Dale Jarrett in 1989, to promote the Ghostbusters II movie.  This car DOES appear on a card, in the 1991 K&M Sports Legends Dale Jarrett set, but I don't have it.

The fifth special paint scheme was driven by Morgan Shepherd in 1993, when an alternate, eagle design was used on the hood of his car at least at the first Darlington race, possibly others. I would not have remembered it's existence if it was not shown in the NASCAR Yearbook, which leads me to another point- there may be others I don't know of or don't remember.

The sixth, seventh and 8th special paint schemes were all run by Kyle Petty, one in 1993 and two in 1994. In 1993 he ran a tribute to his father, Richard Petty on the trunk lid at the Daytona 500 only (where he won the pole- this was the first race I ever saw). During 1994 he ran a Teenage Mutant Ninja Turtles hood and at the final race of the year, the sponsor, Mello Yello, had a tribute to Kyle himself on the sides of the car, thanking him for being their driver since 1991.

While the silver car may not be the first, it certainly is the one that made it popular. Earnhardt would drive a special paint scheme at The Winston (The All-Star race) every year for the rest of his career, and more than likely his Winston specials may appear in this program again.

The Silver car was run to celebrate Winston's 25th anniversary being the title sponsor of the sport, but unfortunately for Earnhardt, his night ended 10 laps short of the end, when he was taken out in a multi-car accident, finishing 14th in the 20 car field. I never saw the race, as it was on a TV channel we didn't get, but I believe he was battling for the lead at the time.
The accident is actually shown on 1996 Ultra #200, but I don't have that card.

The final card in the list is the card shown, as it's the only one in my collection. This somewhat mysterious series has no year or maker's info anywhere on the cards. It was sold through QVC's "For Race Fans Only" show in 2002, which is where I got it, as a factory set. The entire series is painted by artist Bill Purdom. 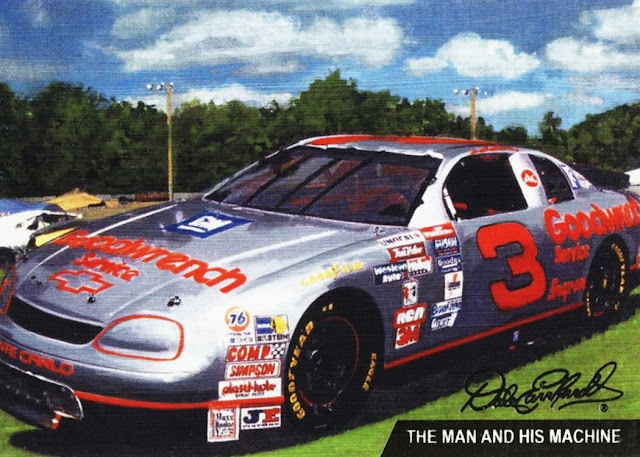 Here's a diecast replica, which shows the unique contingency placement of the We Care logo, normally found on the side of the car at the rear bumper. The car raced with it in the position shown on this die cast, which, as near as I can tell, was the only car to ever race with it in that location.

Here is a 1/24 scale plastic model I build of the car in 2004. Please keep in mind I had absolutely no idea what I was doing so it's not very accurate, it was the first NASCAR model I built when I finally felt confident enough in my skills to begin building them. I was unaware of the proper contingency placement at the time of building, and someday I plan to do another which in theory would be better as I have somewhat better skills now, and more knowledge of how to do it more accurately, plus access to more accurate decals. Finally, here's a photo of the real car on track. I do not know the source of the photo or the photographer. I found it on a NASCAR message board in 2008. Based on this being taken in the sunlight, it must have been taken during practice. 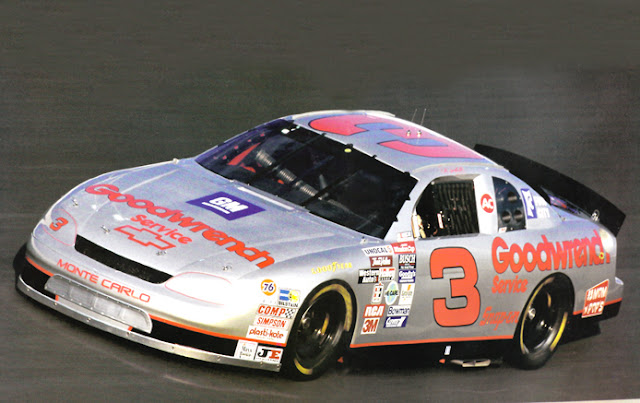 Future posts in this series won't be so long, but being the first one, I had to give a little history of the special paint scheme before I really got into it.

Thanks for reading, and expect February's post to go live during the Daytona 500.
Posted by Billy Kingsley at 5:08 PM