Closer on non-sports than I realized

Yesterday my brother helped me get my case of non-sports cards needing attention out. I was specifically looking for one card, but getting them out actually makes me realize that I'm closer than I thought. As you probably recall, from my mentioning it so much, I scanned my collection of non-sports cards back in 2010 but did a poor job, largely due to having a crappy scanner at the time which couldn't reproduce colors correctly.

Well, after doing one of the cases of NASCAR cards, which I was able to get at myself, I saw one of the non-sports cases and asked my brother to help me get it out as soon as opportunity arose. What I didn't expect to find was that it was the ONLY non-sports case. I knew there were other cases with it, but they turned out to be NBA...and already scanned.

While I was doing that case of NASCAR cards, I decided, again with my brother's input, that I would rescan instead of attempt to modify the original scans if I could. Specifically, I mentioned that I wanted to save my scanning history and use my original scans- which requires modifying or outright deleting my original scans- and he pointed out, they aren't really the original scans since they've been so heavily modified, or deleted. He was right. Besides that, I was finding more and more that were just too bad to use, either parts cut off or mostly just the colors being too "off" like that NASCAR hauler in the previous post. Combine that with the fact that it wasn't a fun process, the fact that my new scanner (which he got for me a year ago this coming week, in my post about it I mentioned it arrived 2/17/19) makes significantly better scans, including being able to pick up foil lettering more often than not in accurate colors, instead of just all black...it all came together, and the decision was made to rescan. It's going much better now, more fun and much faster. In fact, I did about half the NASCAR container in 2 days, when I had been working on it for a week and half in editing the original scans.

Back to the non-sports case, I thought that I had more needing to be addressed, either rescanned or fixed, now surely rescanned. But, I'm closer than I thought...the card I specifically went looking for, well, it turns out I did it back in 2016 or so. The front scan went missing when my old remote hard drive died, and that's why I thought it had never been scanned. But it turns out that the back scan survived, go figure. 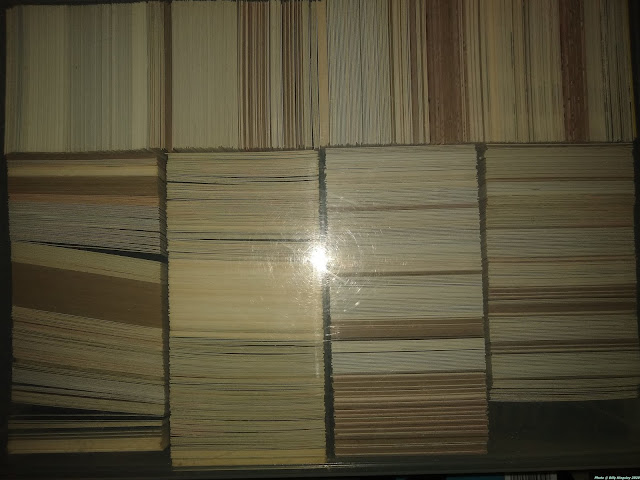 This is mostly what I have waiting for me. I have a little bit more as well that didn't fit into this case, but not a whole lot. There's still about 2000 cards here, I believe, and I can't say I'm going to stop everything and work on them exclusively...although I did yesterday when we got it out. It was full then and I didn't think to take a photo. The left two vertical columns are a mix of Marvel comics and DC Movie & TV cards. That big group of brown cardstock cards in the left column is 1989 Batman movie cards for example. The right two vertical columns and the right side of the horizontal column are history, with three sets making up the majority- Topps Desert Storm, Pro Set Desert Storm, and 2004 UD History of the United States, all of which I've got complete. The left side of the horizontal column is TV and Movie cards, and some car cards. The cards that didn't get into this case are car cards and the GI set from 1991, and while there's about 500 cards not shown, I can do them quickly...the GI Joe set, despite being 200 cards, I could do that in an entire day if I chose to.

I am going to work on these for a bit now, but I don't think I am going to do them all now, either. I don't want to get burned out which I have a habit of doing when I do a lot of the same set in a row, but I can certainly mix them in. As an added bonus for the non-sports cards, I can truly mix them in, since I never typed them into my Excel chart, unlike NASCAR, which was typed before it was scanned. Granted, my Excel charts are on the back-burner for now since the Cardboard History Gallery has essentially made them obsolete, but I know when I finish scanning everything I'll need something to fill the time scanning currently takes so I know I will get back to them eventually. I have to keep the NASCAR cards I fix/rescan separate so I don't end up counting and listing them again.

For now, though, like I said, I will be spending some time working on these. I have not seen them in quite a while, and some of these sets are favorites of mine, so I will enjoy looking through them again, as I scan them, and integrate them fully into the Cardboard History Gallery.
Posted by Billy Kingsley at 3:19 PM