My 5000th Serially Numbered Card - and two other milestones hit as well!

That New Windsor card show turned out to be even more monumental than I thought! As I mentioned at the tail end of my card show report in the last post, I hit 5000 Serially Numbered cards at the show, which is a major deal to me...but I hit two other milestones that day as well, but didn't realize it at the time. 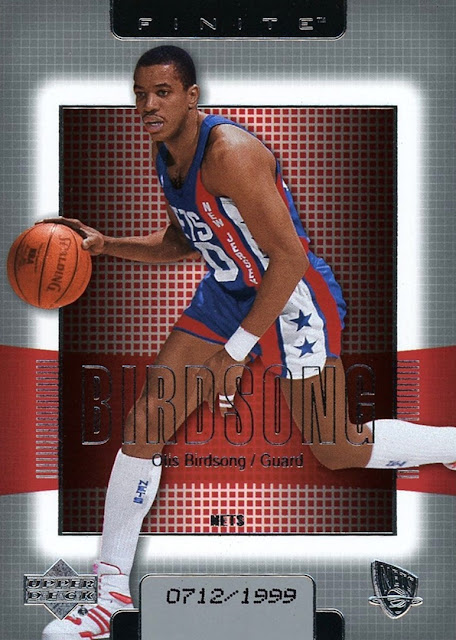 The big one, though, is 5000 Serially numbered cards! My addiction to them is well documented. I don't know why, but I love them. For example, whenever I get some money on COMC, I usually sort by SN - Lowest First and then pick off as many as I can before I run out of money.

This has been a long time coming. I got my first serial numbered cards in 1996. I do not know what my first SN card was, because it's before I began keeping records. I do know, for sure, it's from the 1996 Crown Jewels Elite NASCAR set, the first set to have the parallels serially numbered...at least, the first one I had access to. The same set the previous year also SNd the parallels, but I didn't open any of it in 1995. I still haven't opened any packs of 1995 Crown Jewels, in fact.

You can look through almost all of the SN cards in my collection on my Cardboard History Gallery. I say Almost because there are some I know I have but are not scanned yet. In fact, I'm not even sure this truly is #5000, because I went by what I had scans of (4993 cards) and what I remembered having but is not in the album (4 cards) but there may be more awaiting scans. I don't really know. This one, however, will always be considered the 5000th because I believe it is at the time I got it.

The fact that it's a Nets card, my favorite NBA team, was both totally unplanned AND the reason it's #5000. When I was going through the box of cards Dan brought for me to look at, there was a small stack of this set. I have too many to remember which I have, but I KNEW I needed this one. It's the only one out of the stack I got, and it turned out to be #5000. (#5002 was also a Nets card, and also came from Dan, but was from the Crystal parallel of 2003-04 Fleer Tradition. I have not scanned it yet)

The other milestone actually was a surprise to me. I knew (thought!) I was fairly close to one, and about 400 cards away on the other sport, but I totally messed it up in my head. I thought I was about 400 away from the next NHL milestone, and about 50 away from the next NBA milestone. Uh, no, wrong! I was actually about 40 away from the next NHL milestone, and I'm 400 PAST the last NBA milestone! Yeah, I totally got that wrong. Wrong direction even. Of course, by now, you've figured out that I hit the next NHL Milestone, and it is card #18,000 in my NHL collection. It's expanding rapidly, and I have my fellow collectors to thank for well over half of them, because guess what...this one ALSO came from Dan! And it's funny, because it's from 1974-75 Topps, which is one of the rarer 70s sets in my collection. It had been the 2nd-least present in my collection, in fact, ahead of only 1970-71. I added 36 of them at the show, bringing me to 34 total, which now moves it past 1977-78 and 1979-80, and even 1976-77 which I feel like I have a lot of! It also moves it into a tie with 1978-79, which happened because I added to that set at this card show as well. I have been inspired by this part of the post and will have a full post on this topic at the conclusion of the 2019-20 NHL regular season. 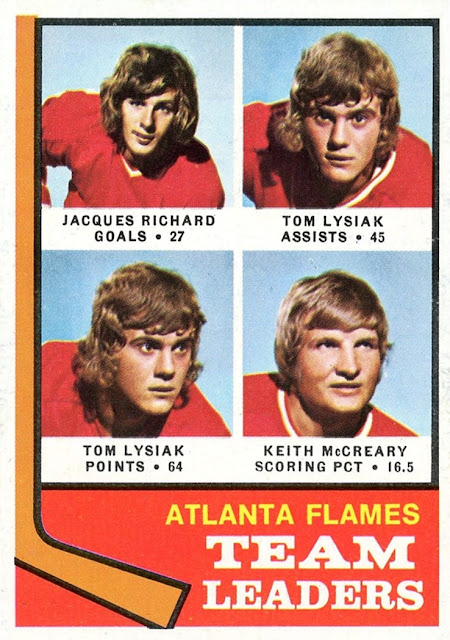 Even more interesting, is that 1974-75 Topps now has two Milestone cards in my collection! One of Shoebox Legends' giftings to me put me over the 16000 NHL marker and it was not only a card from this set, it was ALSO an Atlanta Flames card! In fact, it was Keith McCreary's card! What are the odds of that happening? Considering there are more than 1,469,000 hockey cards to choose from, I'm guessing that's infinitesimal.

But wait, there's more! I also hit 2000 cards added to my collection this year, which feels like a lot...because it is. I'm not sure if it's truly more than usual, but a quick check of my Excel chart shows me it's earlier than normal - I hit 2000 on March 16th last year, May 24th in 2018, March 9th in 2017, April 19th in 2016, January 31st in 2015, June 15th in 2014, and that's the year I began keeping track of the exact order so I can't check any farther back than that. I know there are some years I didn't hut the 2000 card barrier at all. So it is faster than most- 2015 being the outlier, as a friend sent me more than 4000 cards that day, and it's my record for most cards in a day ever. (I'm STILL processing them! Most remain unscanned). It's funny, also, that I have kept that Excel chart showing the exact order I got everything since 2014, but composing this post is the first time I've ever used it to check how my collection is growing by date like this. I didn't even remember which year I started keeping it until I actually pulled it up and looked.  I think the fact that it's growing so fast is because of a few things, one being my renewed desire to do card stuff, after being in a massive burnout for most of 2019, and the other is getting large boxes from SumoMenkoMan and Shoebox Legends on a regular basis. I in fact have not even gone through most of the boxes they've sent me yet because I don't want to get as overwhelmed as I did back in 2015. Another reason is that I'm actually starting to work through the stash I had built from 2015-17, for use in the Card of the Day project in 2018, the same project that put such a burnout on me. When I built the stash I didn't know if I had enough to get me through the entire year getting one new card a day. It turns out I stashed so much stuff that I could probably have kept the project going for 5 years or more...but one year was enough. In fact, I wanted to bail on the project by May or so, but I pushed through, because that was my 30th anniversary project and I wanted to complete it. Never again, though. Anyway, the 2000th card of the year came from...guess who? If you said Dan, aka Vrooomed, then you are correct!
And it turned out to be a really nice one! It turns out to be the only autograph of a current New York Ranger in my entire collection- now that Jimmy Vesey was sent off to Buffalo. 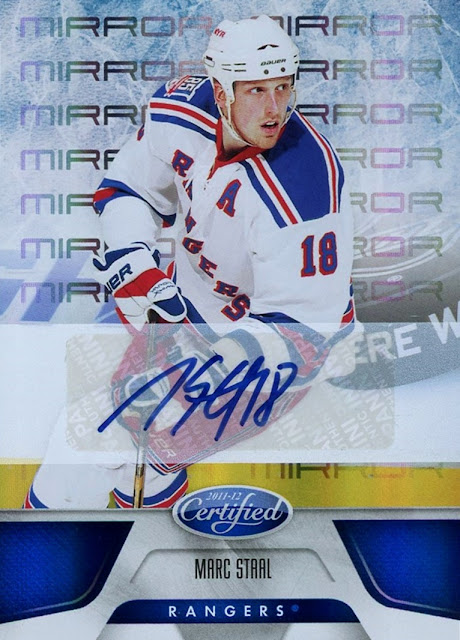 It's even SN, to 99 copies. Note to self: Look for more current Rangers autographs. With only $2.28 in my COMC account, it may not be something I can work on yet...but as soon as I hit publish, you know I'm going to be checking.
Posted by Billy Kingsley at 1:06 PM