The Rodney Dangerfield of Basketball cards

This card gets no respect...no respect at all.

My dislike for 1980-81 Topps is fairly well known. It was a terrible idea and executed very poorly. Instead of giving each player their own, standard sized card, each card is 1/3rd of a standard sized card, perforated with the intent to split them up. They aren't in any sort of order, although there are repeating patterns- the middle card is always a subset card or the two end cards are subsets and the base veteran is in the middle. They don't vary from that at all. There are three subsets- checklists, of which there are 18, Team leaders, and Slam Dunk.

Because of the way Topps did things in that time, both Magic Johnson and Larry Bird appear on cards for the first time in this set. The key card- and the one that will sort of prevent me from completing the set- has Bird on one end, Magic on the other, and Dr. J. in the middle. (Actually 76ers Scoring Leaders, a team card) This is the only card that will prevent me from completing the entire Topps run from 1973-74 through 2008-09, although there were no Topps NBA cards issued between 1982-83 to 1991-92. Although I will never have the original, I do have the reprint from 1996-97 Topps Stars, when the first Topps card of each of the 50 Greatest Players was reproduced in original, Chrome and Refractor form. 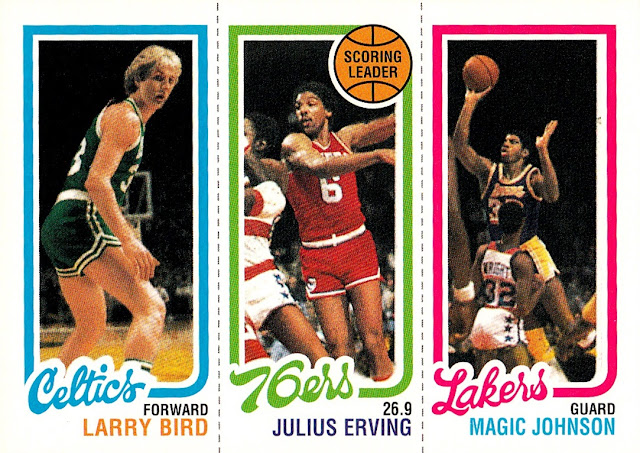 Although it's not an exact reproduction, since the perforations are different. They also reprinted it twice, with the tiny reprint number on the back being the only difference. (If I had been in charge, only the actual card would have been reprinted, not the full panel.)

But...since the panels themselves generally don't matter to me...I still have Magic Johnson's Rookie card in my collection.

How, you may ask? Because there are several panels where two of the three cards don't change, but the third does. Because one of those versions is the Dr. J./Magic Johnson combo, but with Jan Van Breda Kolff instead of Larry Bird, I was able to add Magic's RC to my collection.

Yet, most people do not consider this to be Magic's RC. Even though, if you were to separate them, you would not be able to tell this #139 apart from the one that was originally stuck to Larry Bird via Dr. J. This card gets no respect...no respect at all.

I didn't separate my cards...I made that mistake with the 1996-97 Collector's Choice mini-cards, an homage to these. However, with the magic of Photoscape, I am actually able to see the cards in numerical order, something that's impossible to do in reality due to the way Topps made them.

There is a version where the Bird card is combined with two other cards, (Knicks Rebounding Leaders and Larry Drew) but I do not have it. Maybe some day.

So, while I won't ever have the Bird/Dr.J./Magic card, I do hope to someday have every number, if not every panel, and I will consider it a complete set when that happens...if that happens.
Posted by Billy Kingsley at 12:44 PM