This decade is rapidly approaching the end. It will be the 2020s by this time next week...so I thought it would make a nice Blog Bat-A-Round to see what everyone considers their favorite set from the decade.

For me there were a couple of sets that I considered, but I kept coming back to one: 2012-13 Hoops. Besides the fact that it's Panini's best NBA effort, it's also the set that brought me back to the NBA after walking away in 2006. The pure enjoyment the set brought me as I was chasing it when new, and in the years that have followed, is unmatched by any other set issued in the Teens.

As I wrote when I did my Top 20 Favorite NBA sets countdown, "Why I like it: There are many reasons. The biggest, of course, is that it's the one that got me back in. The fact that it includes coaches. The fact that it's (mostly) sorted by team. The fact that it was the first card for so many of the players who now make up the NBA in my collection. The color coding to each team."

All that still holds true. Nothing else from this decade has had as much of an impact on my hobby than this set. Not even the hockey cards, although the companion set- 2012-13 Score- is my 2nd favorite hockey set of all time and did play a role in my beginning to collect that sport...it didn't have as much of an impact as the Hoops set did. 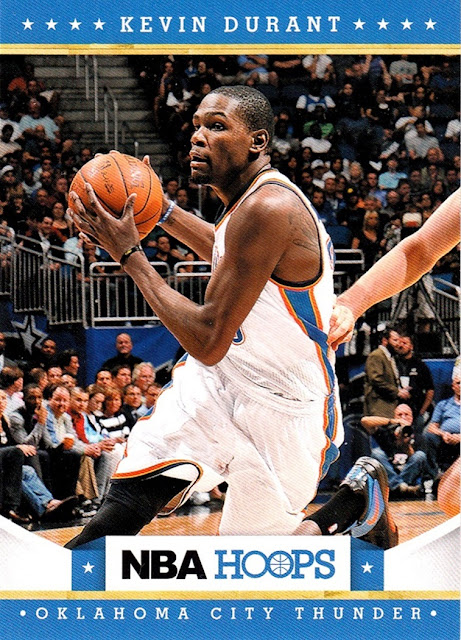 Although this scan is not up to my current standards, it's the one I used in my Top 20 sets countdown, so I thought it would be fitting to use it again....for some reason I can't get it centered, though. I'm one card away from completing the set, and I'm working on a trade to bring that card to me.

So, what's your favorite set of the decade?
Posted by Billy Kingsley at 12:00 PM