NHL moves past Non-Sports for 3rd

It happened sooner than I expected. I knew it was coming fairly soon...but I figured it would be in 2020. Since I began collecting the NHL in January 2017, I realized fairly quickly that it would move up the ranks of my collection. By the end of 2017, it was already in 4th, behind NBA, NASCAR, and Non-Sports. It stayed fairly steady in 4th place, gaining on Non-Sports but still a ways back. As 2019 was drawing to a close, I had actually begun my Year in Review for the year, and was going to include a section on things to watch for in 2020....but the main thing I was going to focus on went and happened on Christmas day!

I woke up Christmas morning with exactly 16,600 non-sports cards, and 16030 NHL cards...a fairly large cushion for Non-Sports. It wouldn't last the day! I ended up getting 729 new NHL/Hockey cards on Christmas, which now puts the NHL firmly into third place!

While this happened much sooner than I expected, the NHL still has a long way to go before it catches NASCAR, and, at my current rate of card intake, may never catch the NBA...but I don't plan to stop collecting, so you never know.

I know NASCAR will probably fall eventually, and sooner than the numbers may make it appear here...the NHL gets multiple sets a year which each have more cards than all NASCAR cards in a year combined, in fact, in just one box of this year's Topps NHL stickers, I got 235 new cards...which is only about 150 less than NASCAR gets in a year, provided I get all of them...which I have not done since 2015.

Of course, those numbers are what I'm working on, but I don't think they are entirely accurate. Even the NHL, which I in theory should have totally documented, I'm not sure on because I have a stack of 1991-92 Score Bilingual which I'm not sure is properly documented, and I have no idea which of the two versions of 1991-92 Upper Deck I have. For the NBA and NASCAR, I don't know if I counted some cards, or maybe I may have counted some more than once. I'm almost sure I didn't count any cards that were not standard card size, both larger and smaller, until I came back to the NBA in 2012.

I won't know for sure until I get everything scanned and that may happen this decade...maybe.

This was the card that pushed the NHL into third place, passing non-sports cards. Modern non-sports cards aren't really common so I don't think they will ever take the spot back. If I could afford and could find all the vintage cards I wanted, that might change...but isn't too realistic to think about. 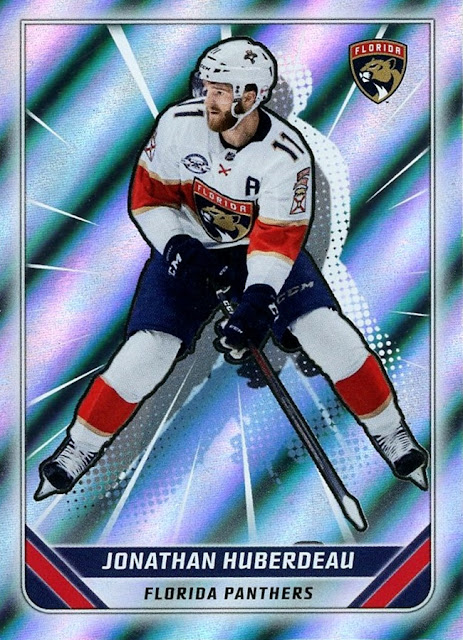 The one-per-pack foil subset scans actually pretty well. Each player who has a foil card (sticker) also has a standard sticker. Each team also has a logo foil sticker as well. I really like the Topps sticker set...it's the first time Topps has produced NHL cards since the 2003-04 season. I'm glad they are back! At 630 cards, it's so far the largest set of the season, although when the rest of the O-Pee-Chee set is issued in Upper Deck Series 2, it'll probably surpass it.

I will show more cards I got for Christmas soon...stay tuned!

Added bonus: I mentioned that I would include a photo of my family Christmas tree in yesterday's post, and I just plain forgot. Here it is now! 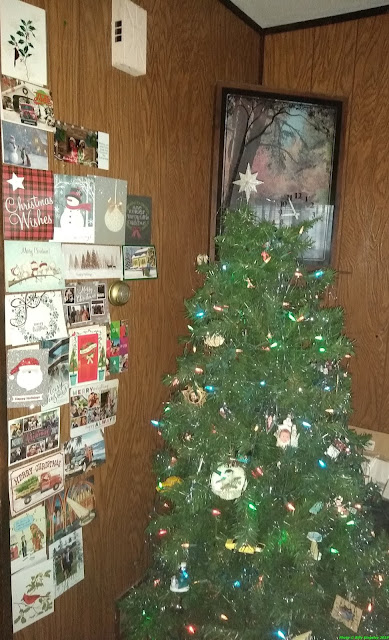 The red plaid card is the one sent to me by Kari of the Trading Card Database that I specifically mentioned previously.
Posted by Billy Kingsley at 6:32 PM