My one and only TTM success

I'm not really an autograph chaser...I have plenty of pack-issued autographs- over 1000, actually- but to get them on a card that wasn't specifically made for autographs? Just not my thing.

In my life, I've sent out two Through The Mail autograph requests, only one of which was successful.

First, the story of the one that was not a success. Back in either 6th or 7th grade (1996-98 depending on year, I no longer remember exactly) we had to write to a celebrity as part of a class project. I chose Rik Smits, who at the time was one of my favorite NBA players, mostly because of the local connection. He attended Marist College which is only about 20 minutes north of me, and I remember that in the letter we had to write, I mentioned about doing the class project (we had to mention that I think) and that I thought it was so cool that somebody who was "from" our area was in the NBA. I chose a duplicate of the 1996-97 Metal base card, and sent it off to the Indiana Pacers address that had been published in Beckett...and waited and waited for a return.

20 years later, I'm still waiting. I gave up hope long ago, and if you are wondering why he doesn't have a presence on Cardboard History that, say, Elton Brand has- yes, that DOES play a role. I did eventually get his autograph- I have the 2005-06 Topps 1952 Style All-Time Fan Favorites and 1996-97 Autographics, plus an IP on the 1989-90 Hoops base card which one of my fellow bloggers sent to me- I THINK it was Jon from A Penny Sleeve for your Thoughts, but it came in before I began recording where I got each card, so I can't be 100% sure.

Now, my one successful TTM comes from the world of NASCAR. It's a driver who at the time I didn't think had any pack issued autographs, but I found out later that he did. This time, though, I knew it was going to be a success before it went in the mail. I joined Facebook in 2008, and back then it was fun- it's not really much fun anymore- and when I first started, I sent out friend requests to several NASCAR drivers, some of whom actually accepted! The first was Stanton Barrett, who never really made it "big" in NASCAR, but it was kind of a hobby for him anyway. His day job is Hollywood stuntman! I sent him a message asking if he would be willing to sign an autograph through the mail and he agreed. I sent it to his race shop and shortly afterwords I got this in the mail: 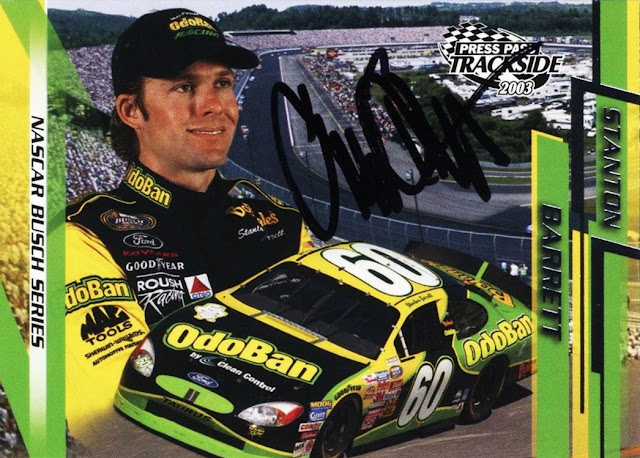 Pretty cool, I think! Stanton only ever had 6 cards issued, all from his brief time in 2003 with Roush Racing's Busch team. Two of them are autographs, from the Press Pass Signings set and it's paralllel, and one is SN5, the dreaded Ebay Preview.. The 2003 Trackside base card is my only card of his- although technically I have two as I count the non-autographed version and the TTM auto as two separate cards.

Stanton has run 226 races over the Top 3 NASCAR series between 1992 and 2016, he also had a brief stint in Indy cars, and raced in Sports Car racing as recently as 2017. Most of his racing came in the Busch (later Nationwide, later still Xfinity) series where he made 203 of those starts, with a best finish of 5th at Atlanta in 1996, beating 10 of the 12 Cup drivers entered in the race. He is a second generation driver, his father Stan raced sporadically in NASCAR over 10 years, his only cards were in 1990 Maxx and the factory set glossy parallel.

I got this autograph 10 years ago now, in 2008, and I've been meaning to write a post about it for a while...finally, I did. My thanks still go out to Stanton Barrett for signing this for me...and if Rik Smits ever reads this, it's not too late to send the card back, the address is still valid!

I guess I should send out one more to see if I can get a percentage better than 50%....but, it's just not my thing, so I haven't. My streak of one per decade is nearly slipping away...
Posted by Billy Kingsley at 4:30 PM