This isn't the first time this has happened, but while going through my duplicates, I found some good cards for my collection, again. This is the 4th time it has happened that I can remember, and the second , err, third, since I founded Cardboard History. The one time without a post, I put a card into the  wrong box, simple as that, and easily found.

This time is not all that much different from the previous two to get posts, to be honest.

Both of the last two times were related to listing my tradelist on the Trading Card Database, which I just finished redoing from the ground up. I listed exactly 9400 cards, but I've already traded two of them.  I would love to pull off some trades. As always, I only list flawless cards for trade. Any damage, like corner dings or surface scratches, goes into my "untradeable" box, which was actually about two times the size of my tradelist until I gave most of them to a cousin. It's getting big again, though.

The first good find-
A nice big printing error from 2015-16 Donruss! When I got this card, a couple of years ago now, I missed the printing blob on the top border. I had a non-blobbed version and saw that this number was already present in my collection, so into the dupes box it went. I was going through the box to see if I could find anything to list on my tradelist, and came across this one. It's now the newest error in my collection.

Next, I found one sort of dangerously. In danger of losing it...I had it listed on my tradelist, the old one, since 2014. If somebody had asked for this card, I would have lost it. It's the hardest error to spot, because visually, it looks totally normal. Except, it's not cut properly. It's noticeably taller than a base card. It's actually a fairly rare error, and only spottable when you have a group of cards together. I measured this one compared to a standard size card (Actually, the Zeller above) and it is 1 16th of an inch taller than a standard card. Hardly noticeable, but enough that it moved it from my tradelist to my Error collection. Odds are that I've had this card since 2000, when I did a box of the set. It's not one you see in repacks very often.
I also found an error that is hard to see in a scan but very easy to see in person, from 1999-00 EX.
Each card had many EX logos on it, and they are textured- embossed, really. You can feel them when you run your finger over them. They are a black logo printed over a whitish underlay. The team logo on the bottom has it too...and the textured white underlay is offset on this card. You know that it's that part because part of it shows up textured under the red border! This set is all holofoil and looks significantly different in hand, by the way.

These last two were never actually listed for trade on the Database, because they were part of a complete set, which I had to break up to get them.

In 1991, Maxx issued a set for McDonald's, which were only available in the South. But, they had a slight problem, and nearly half the set went out the door with the blue line behind the set name missing, like so: 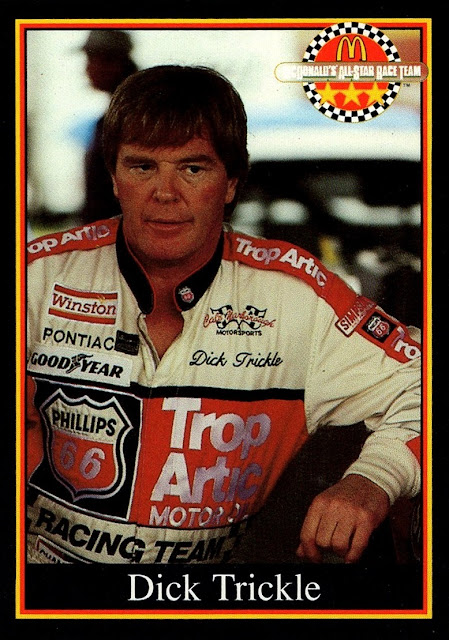 They then reprinted the cards, with the blue line present, like so: 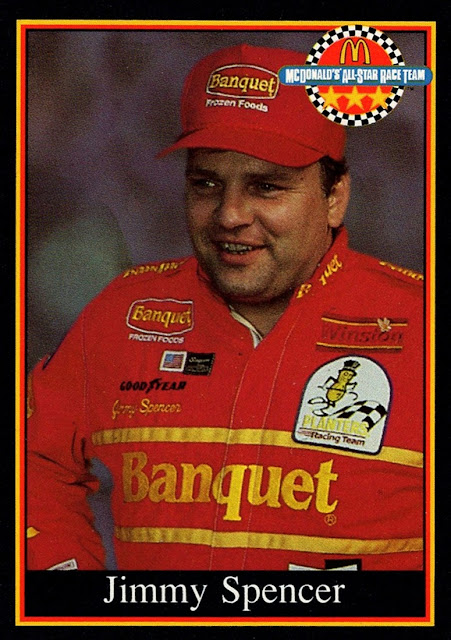 In both cases, I had the other version of the card, the corrected for Trickle and the error for Spencer, in my collection. Luckily, I had them scanned so I didn't need to actually go and physically find them- the scans told me exactly which version I had. This is another Err/Cor I didn't know existed until I discovered it on the Database...and now I've got most of them. I am missing 4 to have the complete promo set, in both error and corrected version. They were more careful with the 1992 set, which has no errors or variations at all. This set, with it's black borders, are extremely prone to chipping, and I have not yet decided if I want to list the other duplicates from the set- I have 29 of them as it was a 31 card set I broke to get these two- or just keep them in reserve in case my actual collection cards get chipped.
Posted by Billy Kingsley at 4:30 PM