Before I begin today's post, thank you to EP, got the package today​..Great stuff! Will cover soon. Now, back to the series...

This is a tough one as well. The 2000s are a bit of a let down compared to the greatness of the 1990s. When I am going through my cards, the majority of them are actually from this decade, but it's the 1990s that I really enjoy the most. In fact, I became so disenchanted with the cards that I left the NBA in late 2006...although now, looking back, I consider it one of if not the worst mistakes I've ever made in my life.

There were some good things in the 2000s- don't get me wrong- but it is no 1990s. It was also when I was farthest away from the hobby. 2007 and 2008 were my worst years in the hobby- 2008 in particular. I only got 14 documented new cards during the entire YEAR, and 13 of them were the bonus set that came with the NASCAR yearbook, always a Christmas present from my mom.
2009 was my card renaissance, and it's when I came back to the hobby full time, it's also when I got back into non-sports for the first time since roughly 1997.

But again, I have to go with a NASCAR card, one of my greatest pulls ever. 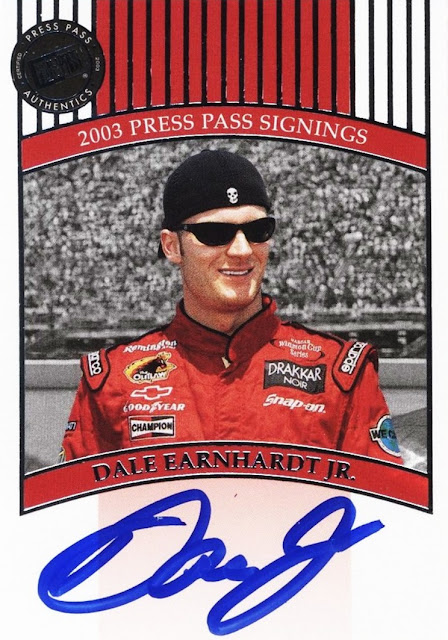 I pulled this card, of my all-time favorite driver, from a single pack purchase from the Target in Kingston, NY, in late 2003. Since about 1998 I had not really done much NASCAR cards- I'd get maybe a pack of each set, maybe none at all. Until I pulled this one. This single card drew me back into collecting what was my favorite sport at that time on a full time basis. I've never left the sport since then. Pulling this one is one of the more important "touchstones" of the hobby for me. I'll talk about that more in 2018 as I celebrate my 30th year in the hobby. NASCAR may have dropped down to 3rd place now behind the NBA and NHL (already), but Dale Jr. is still my all-time favorite driver, and probably always will be. Although I post more about Elton Brand, if I were to make a list of my favorite athletes from all sports combined- something I don't think I'll ever do- they would be tied at #1.
Posted by Billy Kingsley at 4:02 PM