30 Day Challenge 17: A card from the first set I put together by hand

Most of my early set completions were sets that I bought, either as a factory set or as a set built by somebody else, or that I got as a gift from my family.

I think the first one that I actually finished the hard way- card by card, from packs- was 1997-98 Z-Force. I don't know when I exactly completed it but I was done with it by Christmas 1998. When I was doing it it seemed like a bit of a challenge, but I guess time passes differently when you are young. I know I actually completed series 1 twice over but I never completed a second copy of series 2. I was hoping to be able to trade them for something really good if I ever did, but I didn't. I'm not sure where my spare copy is now, but I know it's around somewhere.

Here's just a random card, #96, Lindsey Hunter. This was a set I loved when it was new but not so much anymore. 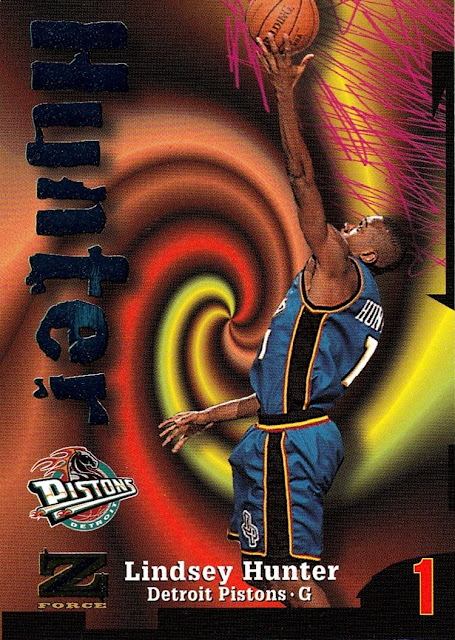 The cross-hatching pattern you see is my scanner not being able to properly scan the card. The name and Z are foil.
Posted by Billy Kingsley at 5:28 PM