Man, nothing can top the Perlorian Cats. But I still have some 90s greatness to share anyway.

I have been an Olympic fan for a long time. The first one I remember is the 1992 Barcelona games, but my family remembers that I watched the 1988 Seoul games as well. But the first one I was really a superfan of? That's 1996. It was the second one where the basketball games had truly the best players in the world. I had discovered the NBA earlier in 1996 so naturally I was a huge supporter of the 1996 Olympic basketball team.

Sad thing is, I have no memories of the 1996 basketball tournament. I know I watched it. I've watched it in every Olympics. I just don't remember it. I don't remember most of the Olympic basketball, and I wonder if that is because I watch so much basketball that it all kinds of blurs together, where the other sports I only see with the Olympics, so it stands out more? I don't know.

But I have chosen a card set related to the 1996 US Olympic basketball team. 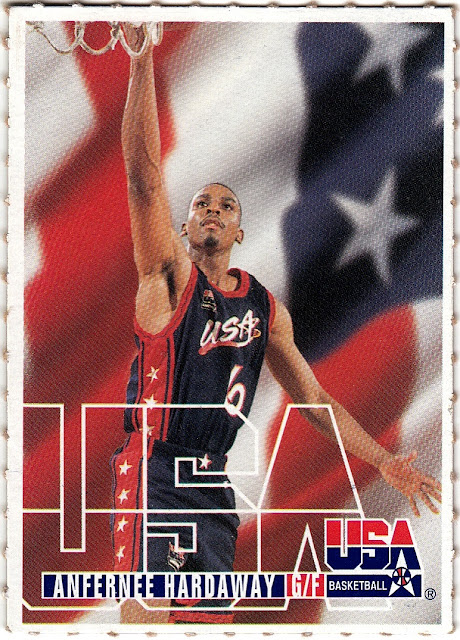 These cards were on the back of Kraft products- I think the crackers with the red stick and odd consistency but still tasty cheese, but I'm not sure...that was a long time ago now. It's a perfect combination of three of my favorite things- NBA, Olympics, and Cheese. I have 5 of the cards, wish I had the rest. I'm actually amazed I got as many as I did, considering they were actually issued in 1995...The scanner I was using at the time didn't handle the cards well, but believe me, they don't have that crosshatching pattern on the actual card. Another set that will have be be rescanned some day.
Posted by Billy Kingsley at 4:34 PM