30 Day Challenge 22: A common player who seemed to elude me

This is an interesting one, because I'm not sure how it was really meant. I'll post it as I see it.

In 2013-14 I was buying a lot of cards at retail. My second year back into the NBA, I was collecting heavily at that time- more than I am now in fact.

Panini makes very small sets. Most are 200 cards. It's not hard to get at least one card of a person if they are one of the "chosen ones" Panini puts into sets. (With a 450 man league, Panini usually ignores more than half of it).

Despite my opening a ton of packs that year, I did not get a single McCallum card. He was the only main rookie of the season I did not add to my collection during that season.

Eventually, I've gotten a couple of cards of him. Not many, but he has been rare to see in a set post-rookie season.

In a bit of a humorous twist, I recently found a pack of 2013-14 Hoops that I had gotten in a blaster when the set was new, but I had misplaced it. I opened it up and what do I find? 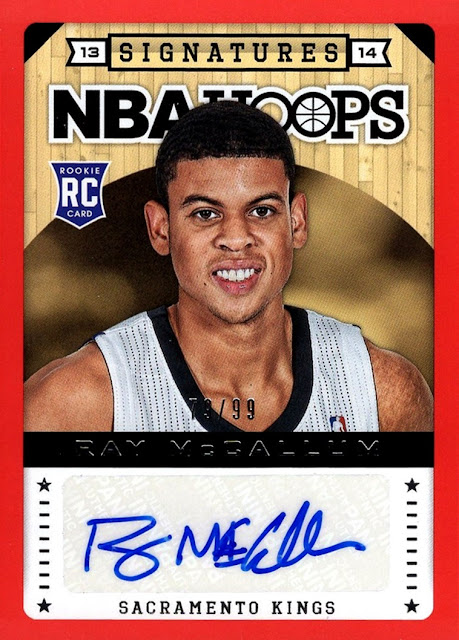 If I had not lost this pack, not only would I have had a card of him during his rookie season...it would have been an autograph.

Funny how that works some times.
Posted by Billy Kingsley at 12:30 PM