My favorite 60s card is actually from a set I've surprisingly never shown on the blog before. In 1961, Milton Bradley issued a 4-part series of postcard sized trading cards, called American Heritage Picture and History Cards. They did a set for Steamboats, which today's example comes from, Automobiles, planes, and trains. I have the complete boxed set for the Steamboats and automobiles but the trains and planes have eluded me. They are not common by any means. When they do show up they are not very expensive, it's just that they don't show up very often. This reminds me that I need to check Ebay again to see if I can add the other two sets....both sets I have cost me less than $20 each from Ebay.

For some reason, the old time ships create an odd feeling in me. It's like a yearning, a sense of passion and pain, almost, an ache of something missing. It's hard to explain. I'm not sure why, because, to be honest...I've never been on a boat ride. Not a small pleasure craft, cruiser, or even my favorite boat of all time, Lake George's Mini-Ha-Ha, which offers 1 hour cruises on Lake George. It should not create these feelings in me, but it does. 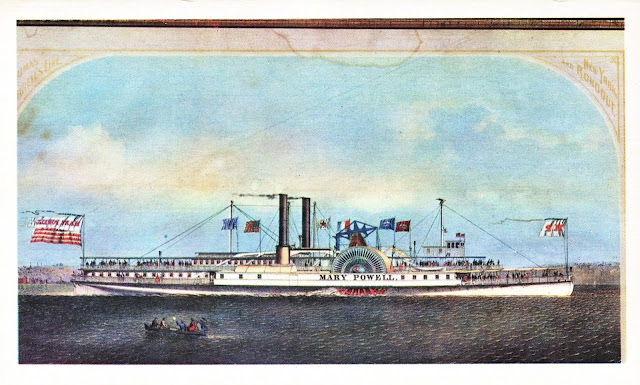 Even just reading the backs of these cards makes a tingle go up my spine and down my arms. It really makes no sense, I can't explain it.

The Mary Powell, here, is a very local ship. She was launched in 1861 and was known as "Queen of the Hudson". She was originally a private ship but also served as part of the Hudson River Day Line from time to time. She plied the waters from New York City to Kingston, NY, between 1861 and 1917, at which point she was retired, and sadly sold for scrap in 1920. None of the Day Line ships were preserved, a true crime in my opinion. Kingston is about an hour away by car but is not very far at all, really. It just takes that long because it requires a convoluted route to get there. I live on the other side of the Hudson, and it's pretty much in walking distance from my home- or would be if the topography would allow. (not to mention my health, which makes walking a challenge sometimes). Or if it wouldn't require crossing the train tracks.

I don't know if any sidewheel paddle ships survive, if they do I know they are not in service anywhere. The aforementioned Minne-Ha-Ha is one of I believe only three ships in the entire US that still gets her motivation from a paddle, hers is at the stern (I think that's the right terminology- it's at the back). As far as I know there is not a single ship still powered by a walking beam engine, shown here over the side paddle.

So much has been lost.

Thankfully, the cards survive. The water damage shown on this card is not actually on the card itself. The painting, which is not dated on the card but I believe dates to about 1890, that has the water damage that the card faithfully replicates.

The American Heritage Steamboat issue has several local ships in it. The Hudson had steamboat routes on it for generations, starting in the early 1800s, up until the 1970s. One of the ships in the set, which did not ply the Hudson, survives on land as part of a museum in Vermont. I hope to visit it some day.
Posted by Billy Kingsley at 5:20 PM