30 Day Challenge 16: A card of someone you appreciate but don't like

If I had the one and only card of John Calipari from his time with the Nets I would show that here, but it's not in my collection. Oh wait, I couldn't show it anyway because it has to be somebody I respect, but don't like.

So I think I will have to go with Kyle Busch. 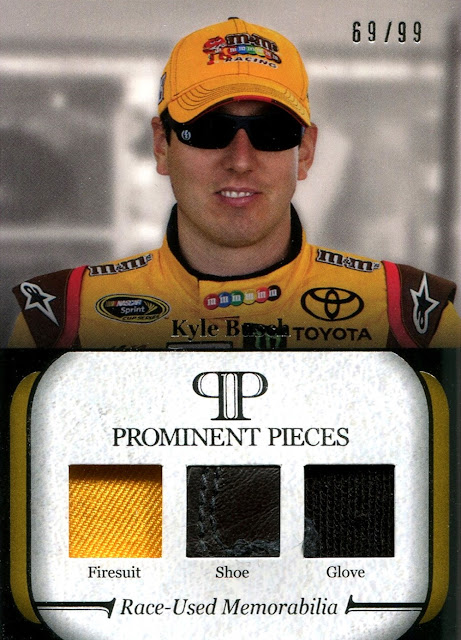 Why I don't like him: He complains a LOT. He's used his car as a weapon multiple times. (That's the big one). He races in just about every Busch and Truck race despite being a successful Cup driver. Nothing annoys me more than Cup drivers in the lower divisions. (For you baseball guys that would be like Babe Ruth playing in minor league ball to pad his stats and pocket book)

Why I respect him: He's a good father. He's one of the most talented drivers I've ever seen. He can do things with a race car most people wouldn't even try, let alone be able to accomplish. If he had a better personality, I'd be a big fan. I was a fan, a long time ago- back around 2000-2001, NASCAR literally made a rule to keep him out of the Truck series because he was so much better than everyone else- and he was only 15 at the time. He's a year younger than I am.

I have long suspected that part of his "bad boy persona" may be something NASCAR is pressuring him to do. Once Dale Earnhardt Sr. was killed NASCAR didn't have anyone to be the "bad guy" and it seems to me like they may have pushed Busch to act that way. I sort of hope that's the case, but if it is, it's a pretty low thing for NASCAR to do. Just a couple of interviews he's done, a few things he's said, lead me to believe that.

I don't hate Kyle Busch, and he's not my least favorite driver in the sport- there are a couple I neither like nor respect- but I don't celebrate when he wins either.
Posted by Billy Kingsley at 6:40 PM