The original topic was "a rookie you thought you were investing in". I don't invest. Investors are the enemy of true collectors. Investors don't care about what it is they are buying, as long as they can make a profit. They keep things from being in the hands of people who actually care about whatever it is they are buying, and they artificially inflate prices in a manipulation made only to make themselves feel better.

What I will do. however, is showcase a player that I thought was going to "make it" in the NBA, but instead never played a single game. 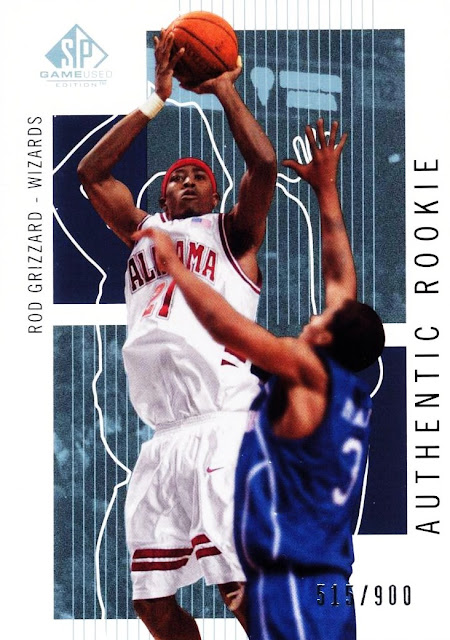 Rod Grizzard was highly touted coming up through college, he was somebody I heard a lot about as a can't miss prospect. He ended up slipping to the second round of the NBA draft, and was cut during preseason. He never played a single NBA game. He did have a professional career- in Singapore, Belgium, Australia, Israel and New Zealand. And for the USBL, which is an American league but so far off the radar they have never gotten any cards. Spent some time in the D-League too. His last year playing professional ball was 2011. I have absolutely no idea what he's doing now.

It would have been tough for him to make the Wizards, who drafted him, that year. The player starting in the same position he played? Michael Jordan. The rookie they chose to keep that year who played the same position was Jared Jeffries, who only got into 20 games that year. It still surprises me that he never got into the NBA. I don't usually hear this much about a player who doesn't make it, but there have been a few. The difference is that so many other people expected him to make it, he actually got cards...
Posted by Billy Kingsley at 12:30 PM