Now we get into the really tough stuff. The 80s and especially 1990s are in my opinion, the best decades this hobby has ever seen. (except non-sports, which peaked before WWII). I was born in the 80s, I began collecting in the 1980s. Not as great as the 90s, but there are some very memorable sets from this time period. You have my gateway to vintage NBA cards (1981-82 Topps), the entire Star brand, the rebirth of Fleer, and the birth of Hoops- one of the only sets that's ever gotten it truly right. NASCAR starts getting cards on a regular basis in 1988, comic book based cards became a real thing instead of a rarity, plus throw in the Empire Strikes Back and Return of the Jedi sets of 1980 and 1983, respectively. The first mainstream Olympic card set dates to the 1980s as well. There are so many good choices and picking a favorite was not easy, in fact I would go so far as to say that the 1980s were tougher for me to pick than the 1990s will be- the real question there is do I pick a card from my favorite NBA set or NASCAR set? I'll be doing that as soon as I save my draft for this post, so I'll know pretty soon. My readers will have to wait 24 hours (give or take) to find out.

I seriously thought about going with a Star Wars card here...even though I am pretty down on Star Wars right now. I hate what Disney's done to it, and 2016 was the first year in my life where I did not watch any Star Wars movies. 2017 will likely join it. Still, I love the battle of Hoth and if I had a card that showed it, you'd probably be seeing it here. But I don't. I don't remember if they didn't show it on a card, or if I just either don't have it or didn't scan it. Either way, my favorite part of the Star Wars franchise does not appear on a card from the 80s in my collection, so you get NBA instead. Shocker, right? 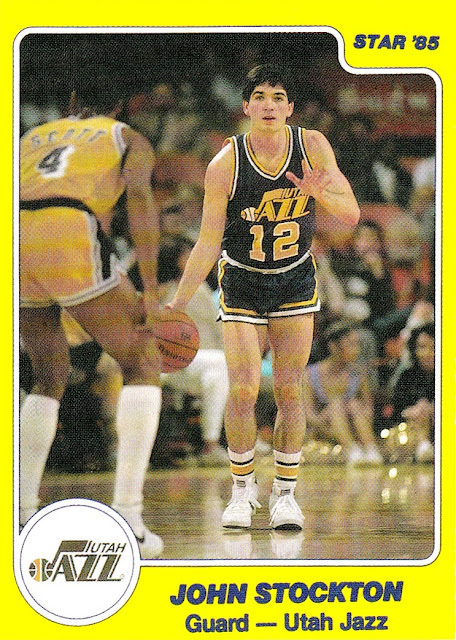 This is one of the key cards in my collection, John Stockton's rookie card. His true rookie card, from his rookie season, not the 1988-89 card Beckett says it is. The Star company had the NBA exclusive license from 1983-84 through 1985-86, and all three sets used the exact same design, just changing the colors for each team and the year listed. (Which I've always been annoyed by, because the NBA should NEVER have just one year listed. It's just outright wrong.) But it does not detract from the greatness of Star cards.

In the 1990s I was a huge fan of the Stockton-Malone era Jazz. Their two runs to the finals, both losses to the Bulls, were so impactful that I still sort of root against the Bulls franchise to this day- despite the fact that nobody on those teams that took down the Jazz has been with the Bulls since the 1999-00 season.

The only problem with Star is that they are hard to come by, and can be very expensive when you do. The 1984-85 set has some of the biggest names in NBA history making their card debut- besides John Stockton, you have Charles Barkley, Hakeem Olajuwon and somebody you may have heard of by the name of Jordan. Not to mention the established superstars like Magic, Bird, Drexler, Wilkins, etc. 1984-85's rookie class is one of if not the greatest rookie classes in history, and they all got their rookie cards in 1984-85 Star. I'll never be able to get most of them, but for my birthday or Christmas one year my mom got me the Jazz team set, which includes Stockton's RC as you see above. I'm still kind of shocked all these years later. It's a card I wanted but never imagined I'd ever get. I am a cheapskate, after all.

Any day a new Star card can be added to the collection is a day to celebrate. I prefer to get them in team bags but if I come across a single I'll usually pick it up anyway. Star cards, by nature, are rare enough that I know if I don't get it then, I may never get it at all. It'd be far better to have a duplicate to trade if I pick up a single and then later get the team bag, but it's never happened.

Sorry for the crappy scan. The scanner I was using at that time didn't handle the Star card fronts very well. At some point I'll rescan it, but I don't know when that will be.
Posted by Billy Kingsley at 5:54 PM