I actually had chosen a different card to post, but then I got to looking at the list of topics, and I realized that the NHL was not likely to make the project...but I was not totally convinced of my favorite 70s card that I had chosen from the NBA. I mostly chose it because it was a favorite set, not that I had any particular attachment to that card. I also couldn't find the card I really wanted to post...most of my 1970s cards are not scanned yet so I probably have not gotten to it yet. (I set aside all cards already done on the Database- unless I need them for a blog post- and the 70s are already done on there).

So I got to thinking, now would be a good time to post some hockey! I'm still very new to collecting hockey. I only started watching regularly in November 2016 and collecting actively in January 2017. I've already gotten back to the 1957-58 season on pure dumb luck of being in the right place at the right time, which is how I've gotten about half of my collection of everything, in all actuality.

This was the first 70s hockey card I bought for myself, and it's the only season I've already imprinted in my brain that I don't need to look up which season is which- the blue border set is 1979-80. I already know that. The other years, because I don't know them very well, I have to turn over and read the backs as I have not memorized the design to the year yet. I'm sure I will, as I get more of them. But the blue bordered set is already one I know the year without having a second thought.

It's also the 70s set that I have the most of already. I bought myself two of them, Shane from Shoebox Legends sent me 5 and Robert from 30 a week Habit sent me one as well. I know realistically I'll never complete this set with the Wayne Gretzky rookie card, but I will have fun chasing them for the rest of my life. 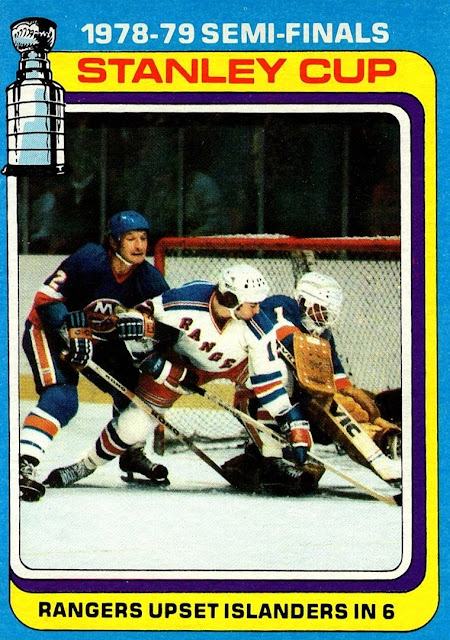 I had mentioned at one point that I hadn't picked a favorite team and the Rangers or Islanders being "local" would not necessarily give them an edge...but the Rangers have become my favorite team anyway. I realized I was disappointed when they lost, where when I watch most games, I'm just happy to see some good hockey and don't really care who wins. I'm sure when I've been watching for a while I'll have a bit of hierarchy of which teams I like better than others, and which teams I actively want to lose games, like I have done over the years with the NBA. But I'm not at that point yet with the NHL. (And, to be honest, I still watch the teams I want to lose in the NBA because I love the sport so much I will watch every team, every time).

I mostly collect cards because I enjoy the aspect of documenting history they do, or at least they used to do. There's not much of that in today's cards which is disappointing but that's a whole other topic. The fact that this one shows the results of a playoff series is why I chose it out of the binder my local dealer has. This really does document the previous season, even more than just a single player card does, which document's that person's previous season. I'm a big fan of cards of events, be they playoff series, league leaders, memorable moments, etc. Cards should be more than just a photo of a superstar, they should tell a story of the sport. I didn't name this place Cardboard Superstars, I named it Cardboard History for a reason.

An addendum to what I originally wrote: As I post this, I am watching my first playoff game in my NHL life. Rangers at Canadiens. I'm really hoping to see a Rangers win tonight!
Posted by Billy Kingsley at 7:13 PM