Earlier this week, Dale Earnhardt Jr. announced that 2017 is his final season as a Cup driver. I am not happy about this, as he is my all-time favorite driver. The sport has lost several big names to retirement in the past couple of years, and none of these retirements make me happy, of course, but when it's my favorite driver? Not cool at all.

I've been a fan of Dale Jr. since 1994 and unlike most I was not a bandwagoner who just became a fan of his because of his father- truth be told, I actually rooted against his father when he was alive, but once we lost him, I realized that the races weren't as fun without him and I actually became a fan retroactively.

Since Dale Jr. was sponsored by Budweiser for the first half of his Cup career, none of his cars from 1999-2007 are shown properly on cards- they are all censored. In 2008, he joined Hendrick Motorsports, and finally his car could be shown properly. Unfortunately, by this time, Press Pass was the only option and they never really figured out that a NASCAR card set should show cars. But every so often one would find it's way onto a card, and today we have one of those. 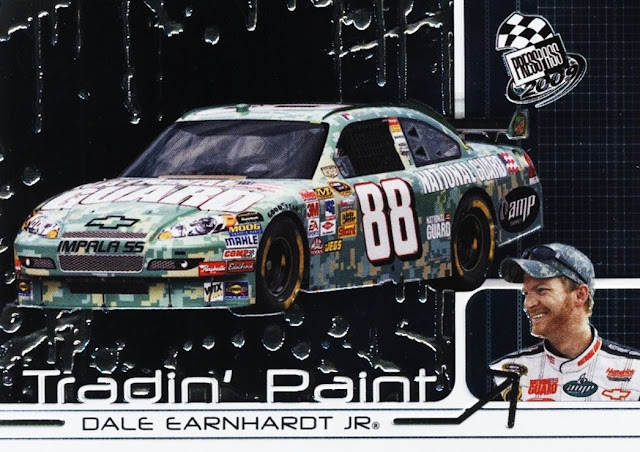 The card is foilboard so it doesn't scan well. Almost all of Press Pass's inserts post-2005 were mirror foil.

The first several years with Hendrick saw National Guard on board as sponsor for half the season, and they had a signed contract for 2015 and I believe 2016 as well but didn't follow through. The cars were normally blue and white but for the July Daytona race many teams usually bring out a special paint scheme, and for that first year with Hendrick the car went all-camo. Dale started third, led a race-high 51 laps, but ended up finishing 8th. Daytona and Talladega can be unpredictable and you need to have not only everything go right, you need drafting help from other drivers to be able to win. Three of the seven cars that finished higher also carried a special paint scheme for that race, including race winner Kyle Busch. It was the only time this camo car ever took the track.
Posted by Billy Kingsley at 12:30 PM