30 Day Challenge 4: A Rookie Card of a favorite player

I bet you expected to see Elton Brand here! Yeah, that was my first thought to- I've got almost all of Elton's rookies so I could easily post 10 of them. But...I won't. You will see Elton during this project, but not today.

Instead, I am going to put the spotlight on a favorite player still in the NBA. 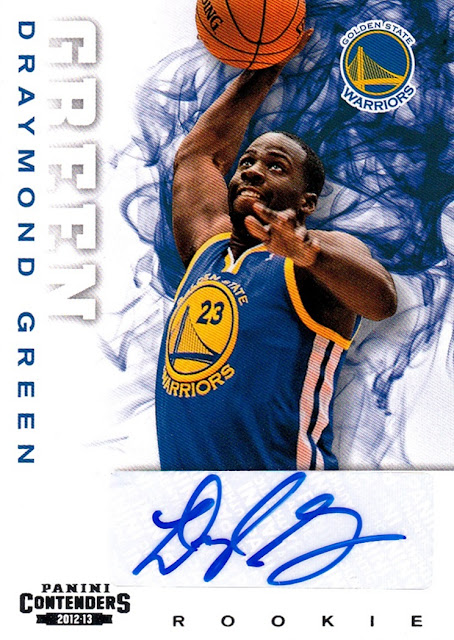 Draymond Green was drafted 35th (!) by the Warriors in 2012. Draymond is outspoken, never shy to give his opinion on anything, and also one heck of a player. When I get my rear in gear and post my "Second Round Steals" series, you will see Draymond featured prominently. He's unlike most of my favorite players...I tend to favor the guys who don't make waves, just come in, do their job, and do it well. (See: Elton Brand, Tim Duncan, etc). He's just got a charisma that draws you in, I suppose. The Warriors would not have won the 2014-15 NBA Championship without him, and they lost the 2015-16 Championship partially because they had to play without him.

I got extremely lucky and pulled this card from one of those Wal-Mart repacks that had 4 packs of 2012-13 Contenders in it. I got every one my Wal-Mart had and I still have one left I have not opened yet. Soon! (I think they only had 5 of them) I doubt I will be lucky enough to pull anything as amazing as this card, though.
Posted by Billy Kingsley at 4:02 PM