I'm a notable cheapskate. I don't like to spend a lot of money for stuff. I try to keep single card purchases these days to under $5. I recently had to be talked into dropping $15 on a card on COMC by my mom and brother. Granted, I don't have as much to spend as I once did, what with having to pay for the medicine that keeps me alive. A $20 bill is pretty much my monthly hobby budget these days, sometimes, if I am lucky, half of my month budget. 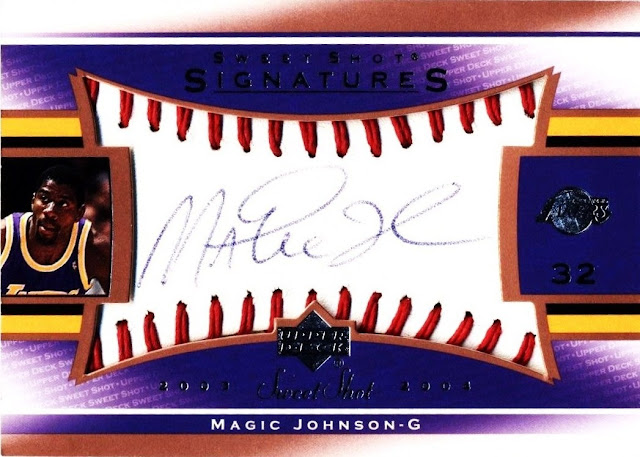 From 2003-04 Upper Deck Sweet Shot...it's Magic Johnson's autograph...on a baseball for some reason. (simulated, I believe). This scan is not very good- it's set back deep in the card so it doesn't look right. I spent $200 for this card...I set up a payment plan with my local dealer and paid in installments. I kind of regret spending that money on a single card, but I also know now that if I had not done it back then, there is no way I would ever be able to get it, because I can't do that now, even if I wanted to. Even if I could, I'm not sure mentally I could convince myself to...I do wonder sometimes what it might be like to be able to afford the rare cards, but I try not to let myself go there. Just in posting this I was thinking to myself what I could do with $200 on COMC or Ebay right now...how many cards I could get to fill holes in my collection(s). But it's really a fool's errand to think of that because I won't ever be able to do it, so why get all my hopes up, you know?
Posted by Billy Kingsley at 4:52 PM