Happy Easter my friends. Hope it was good for you...It was for me. My family gave me two hobby boxes, including my first for the NHL. Stay tuned for a Box Break Review for each coming soon. I took advantage of the 80° weather and worked on models today. Luckily, I have a post from the 30 Day Challenge already written and ready to go...

Our current decade, while still in progress, I don't think will be looked back on with great fondness. Too many exclusive licenses, too many manipulated photos, too many small sets, too many players ignored by card companies.

However, the peripheral world of the hobby has certainly changed. Now, you have websites like the Trading Card Database, COMC, and the concept of card blogging, which to me all date to this decade. I know the Database is actually from the last decade, but I only discovered it in this one. I'm not sure when COMC was launched, and I have no idea when card blogging started. I don't know what the first card blog even was. I know I discovered them in either 2013 or early 2014, through the Database's blogroll. I began reading some, and I enjoyed it. I decided to start my own and in November 2014 Cardboard History was born. It's easier than ever before to get a card you want show up right in your mailbox, and while it's true that the concept also dates to the previous decade- maybe even the late 1990s- it was really perfected in the Teens. Yeah, I still think of the 19teens when I wrote that as well.

Now, it's hard to tell how this decade will be viewed in the future because we are still in it- things we love now because they are new might not be something we look back on fondly (as an example, I loved 2002-03 Fleer Box Score when it was new, and now I'm just kind of "meh" on it) and things we may overlook now might be viewed with great nostalgia in the future.

But for me, the 2010s is going to be remembered as the decade I discovered the NHL. I was aware of what it was in the 1990s, but I didn't become a fan until 2016. In that time, it's become something I can't live without. It's already surpassed NASCAR as my #2 favorite sport. It went from something that I knew existed, but didn't really affect me, to becoming something that's an integral part of every single day of my life practically over night.

I've also spent the entire decade working on scanning my card collection. I began the process in 2009, but I've been working on extensively this entire decade, and I still have enough cards ahead of me that I don't expect to finish this decade either. It's going to be when the majority of my collection was scanned, and that's something that is pretty important to me.

However, with that said, I'm going to show a non-sport card today instead. You'd think I would show a hockey card, or an NBA card- I did get back into the NBA in 2012, righting a wrong I inflicted on myself in 2006, but I'm not. You may remember what I wrote about ships earlier in this 30 day challenge. Well, a piece of one of those wonderful ships outshines any sports card to me. 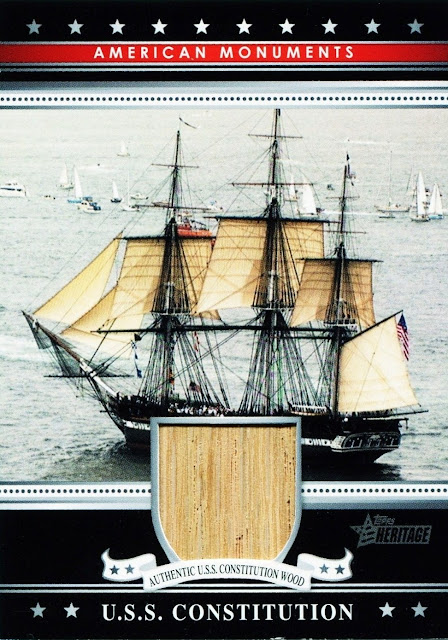 How anyone could not love this ship is beyond me. It's a thing of complicated beauty to me. And to have a piece of wood off it's deck? That's so amazing it's almost unbelievable! It says on the back that this wood was removed off the ship during it's 1972 replanking. This is basically something that would have been considered waste..but I consider it one of the greatest cards in my collection. I pulled it from a box of 2009 Topps Heritage Heroes Edition in 2012, and I consider it not only the best non-sports pull of my entire life, but in the top 5 all-time. It is my favorite non-sports card in my collection. I do wish they hadn't cropped it so tightly though, and more of the actual ship was visible on the card, but I'll take what I can get.

In case you are not aware of the USS Constitution, here's a very brief overview: During the American Revolution this was the latest and greatest in warship concept. She fought in the Revolution, the War of 1812, the Barbary War, and possibly the Civil War. She is still on the active roll of the US Navy but no longer actively fights. I could find out her entire history with a quick trip to Wikipedia but I want to finish writing these Challenge posts, I know if I do that I won't get any more writing done for the rest of the day! 🙂
Posted by Billy Kingsley at 7:12 PM