30 Day Card Challenge 2: A card with more than one person on it

For the second day of the challenge, the concept was a card with more than one person on it. That's a pretty wide variety of subject matter. Does it mean a card set up to be more than one person? Or one made for one specific person that other people appear on prominently? A team card? A League Leaders card? A lot of options! However, I knew instantly when I read the chart what card I was going to showcase. 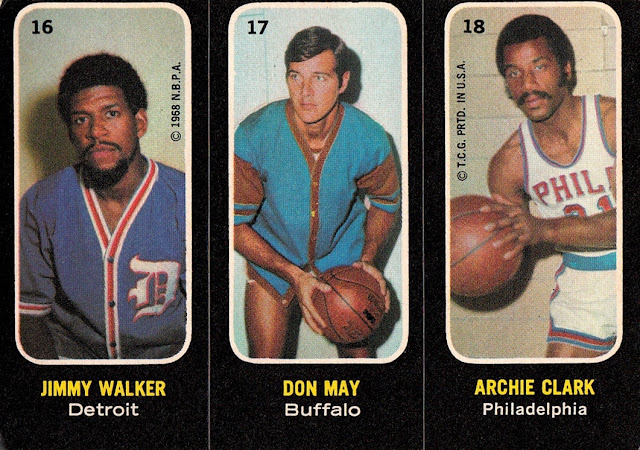 My first Trio Sticker insert from 1971-72 Topps. This was the first standard size insert card in NBA history. I got this one a card show sometime in the 1990s and when I got it I didn't even know what it was. I knew it was old based on the players but it would be several years before I learned what it actually was. I don't actually remember that story of how I found out. But from whenever I got it in the 1990s until late 2016 it was my only card from the set.

I detailed the new additions to the set I got in late October in this post. It was not the first insert in NBA history. 1969-70 Topps had fold-out rulers, which I don't have in my collection, and 1970-71 Topps had posters, which also came folded. I do have one of those- Willis Reed- but the paper is very brittle. I don't like to handle it much for fear of damaging it. Topps used newsprint for it, but not good newsprint. They probably didn't think there would be anyone trying to collect it more than 40 years later, but there are. I show a scan of my poster in my all-time most popular post, my New York Knicks Uniform History.

Thanks for reading!
Posted by Billy Kingsley at 4:04 PM